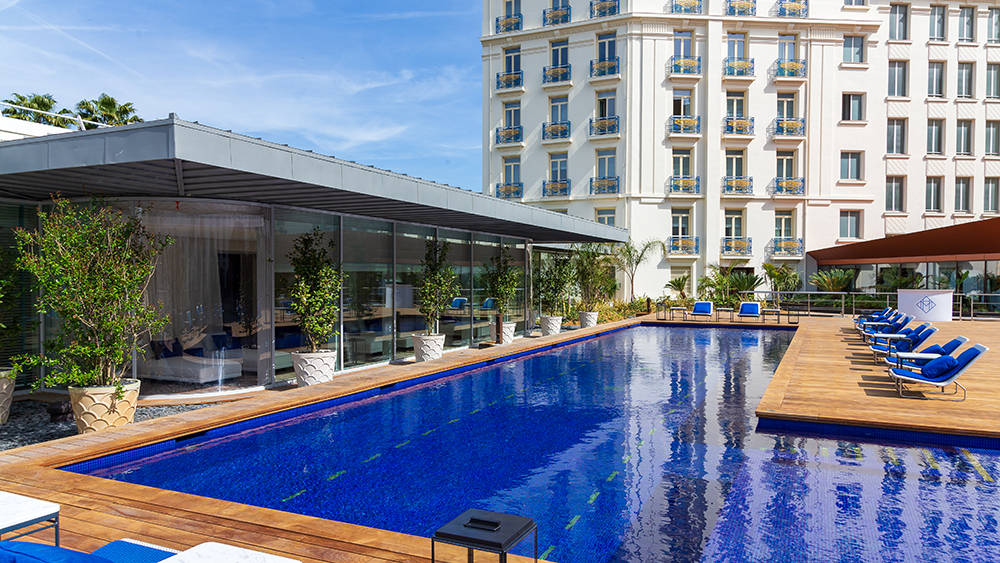 As part of its ongoing multimillion-dollar refurbishment, Cannes’s five-star Hôtel Martinez, the Art Deco grande dame of La Croisette where A-list film stars have flocked since the 1920s, has unveiled L’Oasis du Martinez, an over 30,000-square-foot haven made up of four dedicated wellness spaces surrounded by lush botanical gardens. The goal, according to Yann Gillet, the hotel’s general manager, was “to create a luxurious sanctuary of tranquility and well-being that offers a 360-degree experience.”

That experience can include fitness offerings ranging from tai chi and yoga in the shade of banana trees to rigorous indoor workouts at the 1,500-square-foot L’Oasis Fitness gym, fully kitted with the latest TechnoGym equipment. The sun-soaked, 65-foot swimming lane is heated year-round to tempt guests into the Yves Klein–blue water—but, the decadent hue notwithstanding, only serious swimmers need apply. “It’s not a recreation pool, it’s not a kid-friendly pool,” Gillet says. “It’s a space where you come to exercise.” (For a more relaxing float, use the property’s large private beach instead.) To that end, poolside cocktails are replaced with a selection of health-conscious juices, teas and infusions served at L’Oasis Bar.

L’Oasis Spa, the only space open to the public, offers restorative treatments courtesy of Carita, in the brand’s first flagship space outside Paris. “We wanted to work with a French brand that was also somehow linked to cinema,” Gillet says. “The Carita sisters, Maria and Rosy, were hairdressers to stars such as Claudia Cardinale and Catherine Deneuve during the ’60s, so it’s a luxury heritage brand which shares our DNA.” The nearly 6,500-square-foot space includes five single treatment rooms, two couple suites with salt walls, a hair salon, a hammam and a dedicated men’s salon and barbershop. Signature treatments include Carita’s ultra-luxe facials (the process incorporates precious minerals, including 24-karat gold) though the menu encompasses everything from massages and osteopathy to makeup and mani-pedis.

Gillet notes that, with the addition of L’Oasis, “you don’t just come to the Martinez now to sleep or eat, you also come for fitness and relaxation.” Of course, Michelin two-star La Palme d’Or is still an option for after your laps are done.