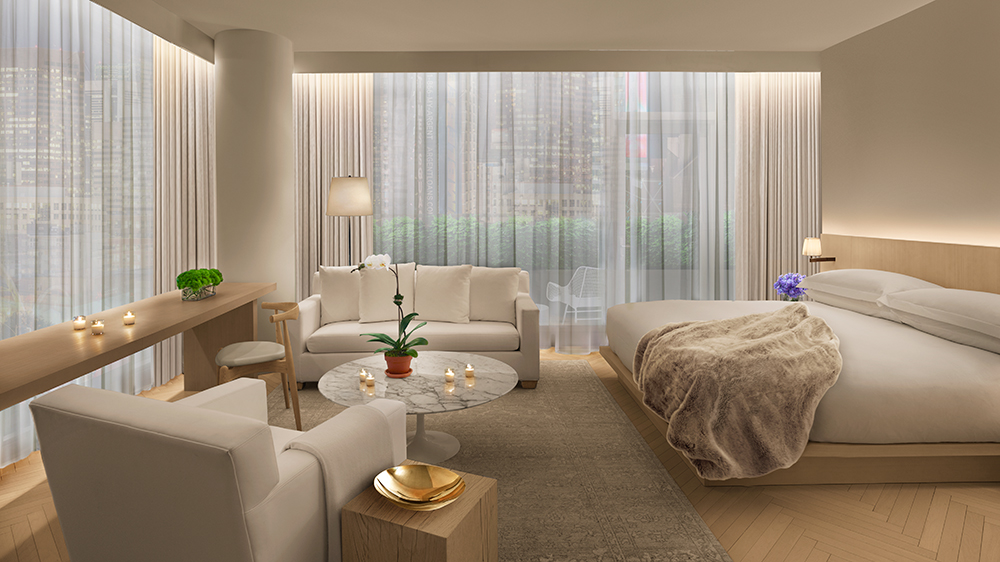 If you ask any self-respecting New Yorker which neighborhood they wouldn’t be caught dead in, they’ll invariably tell you Times Square. But with the opening of Ian Schrager’s second Edition hotel in NYC, that might soon change. Done in partnership with Marriott International, the Times Square Edition is a 452-key property and the first of its caliber in the neighborhood. “I think that what we’re bringing to Times Square is a paradigm shift,” the hotelier told us on the grand opening of his latest project. “There’s never been a luxury hotel here. Never.”

Schrager, who opened the nearby Royalton and Paramount Hotel in decades past, has finally changed that, and it’s already one of the most surprising openings of the year. Upon entering, you walk through a long ivory-hued hall, decorated with nothing more than a few potted plants at the front and a green, mirrored sphere at the end. The simplicity is a stark contrast to the glaring neon signs outside, and a welcomed one at that. Elevators take you up to the lobby on the 10th floor, where a matte black scissor staircase is to your right and the reception counter to your left, both set against a garden wall. All of these introductory elements set the sophisticated tone for this urban oasis, and it only gets better from there.

Accommodations are minimal, bright, and boast great views while suites come with the added bonus of a balcony and standalone bathtub, but it’s the public areas that are the real draw. Next to reception is a dark and sultry sitting room, covered in black from the walls to the furnishings, save for a few golden accents and a glow from the low-burning fireplace. Just beyond that is a lobby bar and lounge decked out in white, the polar opposite of the space before it and an exemplary physical manifestation of yin and yang.

The floors below lead to the hotel’s restaurants. Schrager admits that in the past he wanted his eateries to be “scenes.” “[It] didn’t matter that the waiters had no experience or that the food wasn’t good, [but] that I’ve changed.” Which is why John Fraser, the first Michelin-starred chef to enter Times Square, was brought on to oversee the food and beverage program. The property’s fine-dining outlet, 701West, features a menu that draws from French, Asian, and Latin fare. The wood-clad walls and ceilings are reminiscent of an old-school steakhouse, but the dining room and bar thankfully have pops of color in the form of cornflower blue, emerald green, and chartreuse.

The Terrace, an all-day American brasserie, and Outdoor Gardens are an entirely different story. The restaurant’s bar—with its vaulted ceiling, antique mirror, red velvet barstools, and ornate display case filled with crystal decanters—is gorgeous, and the white dining room is bright and light, with towering vegetation interspersed between the mustard-hued booths. The green narrative stretches over to the terrace, where there are two covered spaces, each with their own bar, that have been dressed up with ivy, hanging ferns, and Moroccan-style lamps. There’s also an open-air patio with plenty of seating that will undoubtedly be a popular spot when the weather warms up.

And the Studio 54 creator couldn’t resist adding in an entertainment venue. According to Schrager, Paradise Club will “harken back to the golden age [when they] had a lot of great entertainment [in the area].” The modern-day cabaret will put on a show that’s part-theater, part–performance art, four nights a week that’s based off of William Blake’s The Marriage of Heaven and Hell while serving bites that run the gamut from hot dogs to caviar. “I’m thinking [now that] Times Square isn’t overrun with drugs and prostitutes, I’d like to see the whole thing get elevated. I’d like to think that there will be other stylish hotels . . . and good restaurants that come here, that there will be other forms of entertainment like there were historically, that the area won’t just cater to the lowest common denominator, that we’ll go back to the magical mix of high-brow and low-brow, which is what [Times Square] always was.”

While Times Square has a long way to go before it’s dubbed a local’s hangout—and who knows if it ever will be—the Edition makes a strong case for occasional outings. The multiple bars and outdoor terraces will certainly help fill the void of desirable after-work watering holes in Midtown. And there’s really no question about whether or not the rooms will be filled. “When people say, ‘Oh, you think you’re going to be able to get people to Times Square?’ [I say], ‘Not a doubt,’ ” Schrager says. “I’ve done it already in the past here and in other places. You build a good product, people come.”