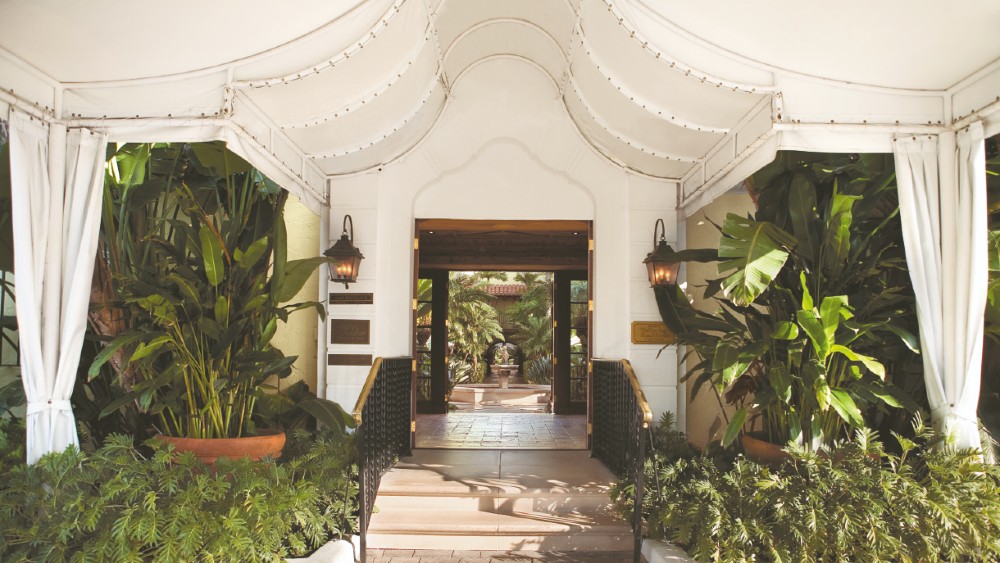 From Gary Cooper and Greta Garbo to Amelia Hearst and Marjorie Merriweather Post, The Brazilian Court has hosted them all. Built in 1926, this Palm Beach landmark has long been a favorite of socialites, power players, and celebrities, who appreciate the intimate, Mediterranean hideaway vibe originally crafted by famed New York architect Rosario Candela. Known for its lush interior courtyards and topical flair, the Leading Hotels of the World member hotel has such a devoted following of regulars that guests feel passionate about any changes made to the place—which came in to play when the majority of rooms underwent a total re-design this fall that resulted in a contemporary new look.

“It was time for a change,” says Lauren Hastings, an experienced hotel and high-end residential designer who oversaw the renovations. With all the changes and development happening in Palm Beach, she notes, “the owner (of the hotel) was ready to do something new, and give the place a face lift—which was a little nerve-wracking, considering our devoted clientele.” We spoke to Hastings about the inspiration for the new look, and some of the challenges involved in re-imagining such a storied spot.

What motivated the renovations?

The way people are traveling is different, and hotels have to change with that. Our rooms were last done twelve years ago, and the décor was more classic, more upholstered. It was like if you were visiting a relative, with bed hangings, carpets, and lots of throw pillows. But today’s travelers don’t want to deal with taking a bunch of pillows off the bed when the get to their rooms—they want to see a crisp white bed. We still have to adhere to our high standards, and everything has to be the utmost in luxury, but it’s not stuffy—it’s a more approachable elegance.

What inspired the re-design, and what are some of the new elements?

We didn’t want to do what is expected of us, or of Palm Beach—so there are no pink couches, palm frond wallpaper, or drawings of botanicals and Blue Herons. I started with a picture of wisteria and went from there, drawing in some of those colors, like lavender and Kelly green. Then we decided to go big and upholster the whole wall behind the bed—we’re talking 13-, 14-foot panels—with faux silk fabric printed with a wisteria design by Miami artist Austin Kerr. We then custom-made all the furnishings, like the green velvet headboards, the curved side tables, and the velvet couches in the suites.

Some things we kept, like the limestone—which is timeless—but we refinished all the stone in the bathrooms, updated the lighting, and upgraded other materials. Before, the look was more upright and formal; now, it’s more lounge-y, cooler, and relaxed. We wanted to inject it with fun—the lamp shades aren’t perfect, and the artwork is oversized black-and-white photos of famous faces, from Elton John and Kate Moss to Brigitte Bardot, by British photographer Terry O’Neill. We also took out the heavy cabinets around the wet bars and replaced them floating shelves—people aren’t coming to this hotel to cook!—and swapped the wall-to-wall carpeting for beautiful, more elevated mahogany wood floors, which to me makes a huge difference.

What were some of the challenges involved with the re-do? The hotel is landmarked, right?

The building is landmarked so we can’t do anything to the exteriors, but the inside is where we can grow. Most of the challenge came from the layout in general. Some of the hallways are really narrow, for example, so we had to design around that, and some of the older, heavier furniture had to be chainsaw-ed to be removed—it was like they had built the rooms around them! Also, each room is a different shape—that’s what we are known for, for not being cookie-cutter—so we had to create a standard for something that’s not standard. Overall, the past is respected (we kept things like the crown molding and mahogany details), but with a fresh take.

What has the reaction been?

Some of our rooms are condos, and the response has been great from those owners. People like that it’s timeless and vibrant; we’re not trying to be trendy, so I anticipate that what we’ve done is going to last another couple of decades. We do have those guests that will always want their wall-to-wall carpet and tassels, and we may keep a couple of the traditional rooms for them for a while, as the final dozen or so new rooms will be completed next year. But while our guests are first and foremost, we do have a vision—and we want this to be like nothing else in Palm Beach.