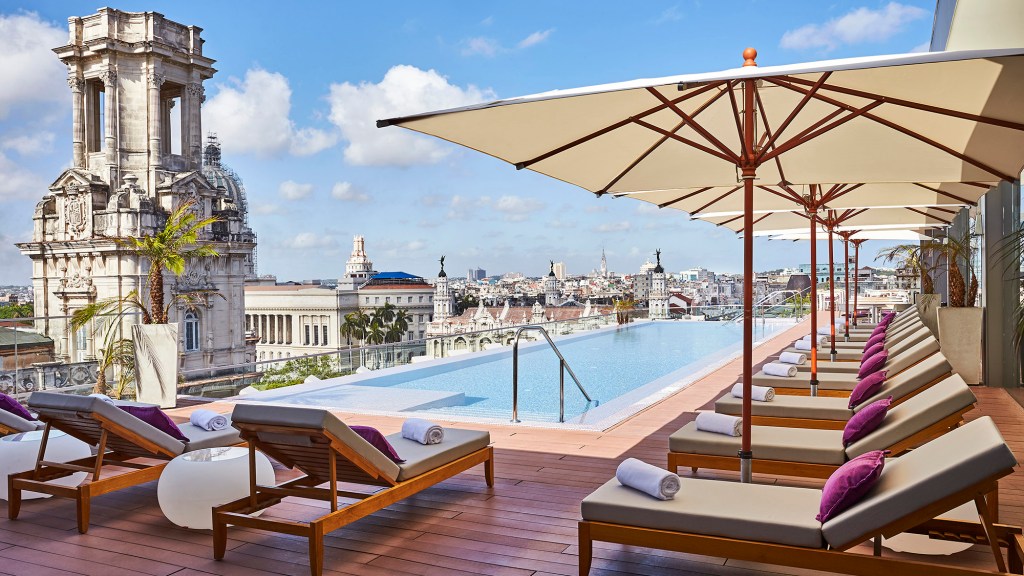 Cuba’s first true five-star luxury hotel has finally opened. The long-awaited Gran Hotel Manzana Kempinski La Habana debuted in June in the historic heart of the UNESCO-designated Old Havana—just days before President Trump announced new restrictions on travel to Cuba. For travelers eager to see this landmark hotel—and the magical city in which it is located—now is the time to go.

Constructed over nearly 25 years during the late 19th century and early 20th centuries, Havana’s Manzana de Gómez building was Cuba’s first European-style department store and silent-film theater. Like many historic structures in this long-isolated country, the Manzana has been slowly decaying since the 1950s. Now, completely reimagined as a 246-room hotel, the landmark shines with a soothing gray-and-white color palatte punctuated by generous splashes of tropical pinks, purples, and blues. Three bars, three restaurants, a top-floor gym, a rooftop pool, and a 10,000-square-foot spa ensure an urban-chic experience totally new to Havana. Air conditioning and Wi-Fi—commonplace amenities virtually everywhere else in the Western Hemisphere, but true rarieites in Cuba—are also available.

Though Cuba has not seen luxury like this since the 1950s, the Kempinski is not without its hiccups. Service is not a strong point in this nascent country; as such, the demands of well-heeled travelers must be tempered. Still, the Gran Hotel Manzana retains an unrivaled grandeur with its whitewashed façade, elegant colonnades, and high-ceilinged spaces. Indeed, the time to book is now—before it’s too late.