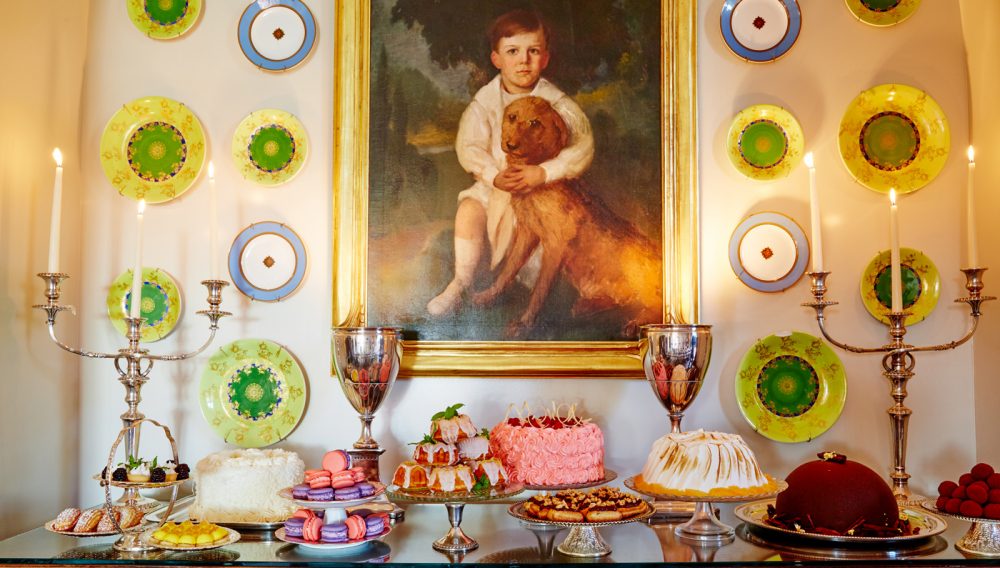 “The easiest way to become a millionaire,” says the renowned hotelier Ali Kasikci, “is to start as a billionaire and buy a hotel.” But Alan Stenberg and Daniel DeSimone were not billionaires. The writer and orthopedic surgeon were out for a drive in Hastings, N.Y., when they discovered a crumbling beaux arts villa designed by Carrère and Hastings, architects of the New York Public Library and the Frick mansion. “We were in our fifties, and we wanted to semi-retire and do less,” says Stenberg. DeSimone proposed buying the pile. “We could do a little hotel,” he suggested. “How hard could it be?”

Thirty million dollars later, Stenberg and DeSimone run the 18-room Glenmere Mansion. They oversee 75 employees, two restaurants, a spa with a hammam and 150 acres of meadows and grounds. Nightly rates range from $850 for a room to $3,885 for the three-bedroom Goelet Suite. Stenberg and DeSimone are living the life of which many dream. Or so it might seem.

Who hasn’t glanced at the lobby of a deluxe hotel and envisioned gliding about as host or hostess in Gilded Age grandeur, catered by expert staff and sharing it all with well-behaved friends and family?

“When people say it must be fun, I say, ‘Stop right there!’” says Stenberg. After a four-year renovation that included breaks for government-mandated searches for native frogs, the hotel had zero guests the first few weekends it was open, having had no budget for marketing. (It is now a member of the Relais & Châteaux fellowship, and markets to businesses for events and conferences, which help fill rooms midweek.) He and DeSimone moved from their sprawling Tuxedo Park manse to Glenmere’s handicap room, where they lived for three years, their clothes hanging from two garment racks. They shared the space with their standard poodle, whom they trained not to bark. “We were waking up at 5 am and going to sleep at 2 am,” Stenberg says.

Vacations? “We went to a sales meeting in California once.” Awkward moments? They learned not to call guests to report forgotten belongings after notifying a wife whose sweater it was not. “The heat isn’t working in Room 4. The chef just cut his finger,” says Stenberg, describing his life of romance. It took six years before the venture was profitable. “Ten years in, we’re doing well,” he says. Repeat guests and word of mouth drive the weekend business, which is so strong that he has no concerns about the next economic recession. “I have to pinch myself.”

The irresistible nature of hotels has produced some of the world’s finest properties, products of passion and requisite naivete. The veneer of ease may be thin, but it’s seductive. Kasikci, who spent decades running hotels for Peninsula and Four Seasons, now consults with private owners who can’t resist the temptation. “It’s the second-oldest profession,” he notes, urging caution. “It’s like onions. The more layers you peel back, the more you cry.”

Still, after many years of unexpected pitfalls, struggles and sleepless nights, most of the newly anointed hoteliers we spoke to ended up profitable and happy. At least somewhat.

Bianca Sharma was a Texas widow with two young sons when, vacationing on the Amalfi Coast of Italy, she spied a crumbling former nunnery clinging to the sea cliffs. “I romanticize everything,” she concedes. Also stubborn, she could not be dissuaded from buying Monastero Santa Rosa to create a luxury sanctuary. “My accountant tried very, very hard to talk me out of it,” she admits.

A decade-long renovation followed, in part, she says, because the British architecture firm she hired struggled for eight years with Italian approaches to stone-on-cliff construction, which lacks a modern foundation. A local architect ultimately managed the project successfully. After the hotel opened in 2012, with 20 rooms and suites, it took a year to discover why parts of the property would run out of hot water. (The huge boiler hadn’t been properly vented.) Sharma got unwanted lessons in human nature at a hotel whose rates range from about $500 to $4,500 at the current exchange. “You know what surprised me is what people who paid this much for a hotel room will steal,” she says. Cashmere blankets disappeared from around the communal fireplace. Cotton throws vanished from the rooms. People took the clever “Do Not Disturb” signs, which portrayed a shushing nun.

But after her younger son, Nathan, graduated from New York University’s restaurant management program and studied Italian, he joined her in running Monastero, and from afar, their approach looks a lot like the dream. Bianca spends much of the year in Durango, Colo., arriving in Amalfi each spring to reopen the hotel after the annual winter closure. The Monastero, which turned a profit in 2013, is becoming renowned, with a Michelin-starred restaurant, a spa and a long list of awards. Her accountant, she says, is “like the proud father of an unwanted pregnancy.”

“I’ll never get that money back that I spent to build it,” she notes. But that wasn’t the point. “We’ve talked about the fact that this will go to my sons someday.”

Charles Royce was a mutual-fund titan when developers proposed demolishing a decrepit hotel near his summer home in Watch Hill, R.I., and replacing it with six “McMansions.” “What would it take to make you go away?” he asked the developers, whereupon he found himself the owner of Ocean House, a storied Victorian-era inn that turned out to be a teardown.

Royce built a replica that cost, he says, nearly $200 million. “There’s not a single romantic thing in it, especially starting out,” he says. “In a million years I wouldn’t do it again. I want to be clear.” Friends and family requests are a constant. “That can get tiresome. Every charitable institution in New England wants us to donate a room to their gala.”

“My vision was an exceptionally fine hotel,” Royce says. And that is what he accomplished, opening in 2010 and turning a profit by 2014. Room rates in the summer average $840 to $3,250, while winters run $415 to $1,300. The hotel developed a meetings and weddings business and stocks its calendar with guest activities and weekend themes. Royce lives just a few minutes away and lingers at the hotel most weekends because he “loves talking to the guests.”

Some owners struggle to adjust to the innkeeping life while others take to it quickly. Kyle and Katina Connaughton opened SingleThread Farms, a Michelin three-star restaurant, inn and farm in Healdsburg, Calif., in December 2016, after 20 years of dreaming. Dinner is currently $330 per person, while the five rooms and suites, with soaking tubs and heated floors, range from $1,100 to $1,650 per night.

“We feel so fortunate to do what we love,” they say in unison. How many days a week do they work? “Seven. There’s no separation for us of work life and non-work life,” says Kyle. “We think of it less like we’re running a Michelin three-star restaurant and more like every night we’re throwing a dinner party in our home.”

Rick Caruso, an influential retail mall developer, is just starting out as a hotelier. This spring he opened the resort of which he’d long dreamed, the Rosewood Miramar Beach in Montecito, Calif. Revenues to date are 40 percent higher than projected, he says, but expenses are far exceeding plan as well. Guests have been challenging his pledge of high-touch service. “We don’t want to say no, so we are serving dinner and lunch in places we never thought of,” says Caruso, who has hired additional staff to cater to requests such as setting up tables in the gardens, on the great lawn and on the beach.

Yet Caruso has lured his grown family to spend three weekends at the Miramar in the two months since opening. “It’s playing out in my life the way I dreamed,” he says. So perhaps he can now sell his 216-foot yacht, the Invictus. “I may!” Caruso says. Pause. “No, I won’t.”