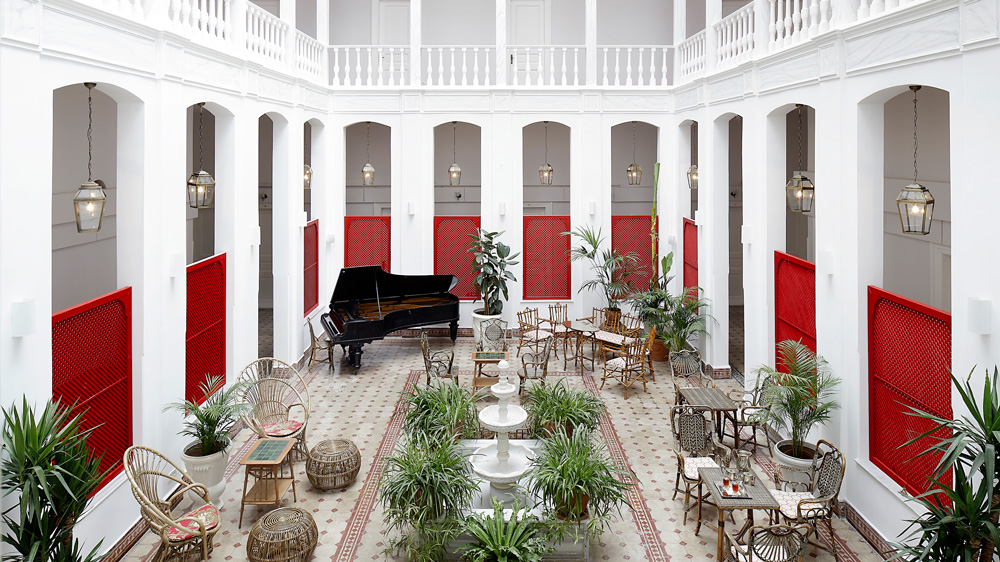 The Splendid Palace Hotel on Büyükada, the largest of the Princes’ Islands in Istanbul’s Sea of Marmara, has lived many lives. Built in 1908 by Ottoman hero Marshal Kâzim Pasha, it was requisitioned during wartime by the military, served as a hospital during the Balkan Wars, and was occupied by the British in 1919. In between, it was frequented by an illustrious roster of guests, including beloved Turkish poet Yahya Kemal Beyatli, President Mustafa Kemal Atatürk, and the Shah of Persia, and served as an Art Nouveau–inflected backdrop for countless Turkish films.

The island, where horse-drawn buggies are still the mode of transport, can feel trapped in amber. But Splendid’s newest incarnation—care of the architecture and design firm Studio Noor, which worked closely with Pasha’s descendants to refurbish public spaces, 60 guestrooms, and nine suites—freshens things without denaturing the romantic time-capsule vibe. “We tried to stay as faithful as possible to the hotel’s ‘shell,’ structure, and fixed features,” explains Luc Lejeune, managing director at Studio Noor. Herringbone floors were stripped of a century’s worth of dark brown varnish, carpets running halfway up the walls of public rooms came down, and original chandeliers underwent reconditioning and re-polishing.

Studio Noor also painted the shutters on the double-domed building a lively Basque red, then brought the color indoors with screens and lanterns in the winter garden and a floral fabric on the lobby’s borne sofa. They pulled many original furnishings from storerooms and attics and restored them, and reproduced other that were too fragile to reuse. These were supplemented by antiques and more modern pieces. “We were not going to introduce crazy contemporary decorative features or art,” says Lejeune, “but something that you would easily find in a nice family estate. Layers have been added by generations, including the last ones.”

Its grandeur no longer faded, the hotel, says owner Serra Taskent, is popular with “a very eclectic mix of people: expats and tourists and Turkey’s more artsy crowd…It is one of the most photographed places in Istanbul. People come in and wonder if it is a museum. It is a place to be.”