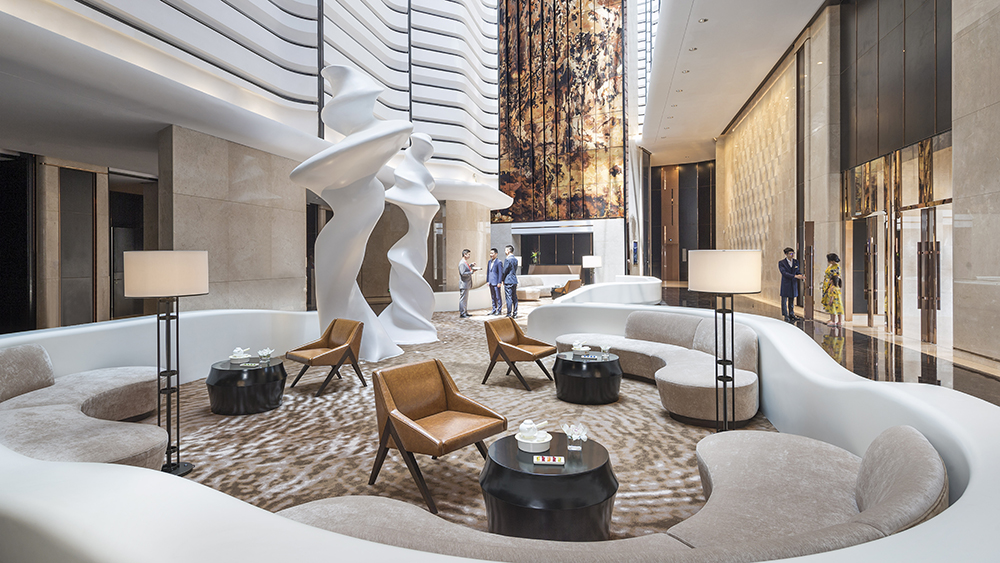 The world was shocked when renowned architect Zaha Hadid, the first woman to win the prestigious Pritzker Architecture Prize, died unexpectedly in 2016. Adding to that tragedy were her many projects left unfinished, including the Nanjing International Youth Cultural Centre (IYCC) in China.

Fortunately, her London-based firm Zaha Hadid Architects has carried the torch, making it possible for a new hotel, Jumeirah Nanjing, to open inside the building last September. Located in the new Hexi business district, the IYCC’s design blends the city’s past and present. Although Nanjing, with its city walls and Confucius temple, peaked in influence during the 15th century as the capital of the Ming dynasty, this city of more than eight million is still growing and thriving.

The building’s design is quintessential Hadid with two sleek towers emerging from the futuristic curves of a central podium. In tribute to Nanjing’s shipping history and location on the banks of the legendary Yangtze river, the structure is modeled after the graceful form of sailing ships. Meanwhile, the centuries-old tradition of intricate Yunjin silk brocade weaving from Jiangsu province inspired the sweeping shape of the windows.

The 261-room Jumeirah Nanjing, the second in China for the Dubai-based brand, occupies floors 39 through 67 inside the north tower of the mixed-use complex. Just like the building’s exterior, the interior also reflects elements of Nanjing’s history and culture. Throughout the hotel, art pieces depict classic scenes like the Yangtze river, Kun opera, and ancient poetry.

The Cha Jie tea lounge, outfitted in neutral tones and black lacquered panels, stands out among the hotel’s six bars and restaurants (specializing in everything from Cantonese cuisine to chocolate desserts and martinis) with over 30 varieties of top-quality teas including oolong, pu-erh, green, red, scented teas, and more. The best opportunity to try them is during the daily sunset tea ceremony, sometimes accompanied by a live pipa (Chinese lute) performance.

The origin of the natural tones found in the 212 guestrooms and 49 suites comes from Nanjing’s storied academic and literary history. The rich chocolate and gray carpeting, pristine white bedding, and lacquered panels are pulled from the so-called “Four Treasures of Study”—a Chinese expression that refers to the brush, ink, paper, and inkstone used in the art of calligraphy. Decorative screens, made from traditional wooden printing blocks with asymmetrical brushstroke patterns that form a dragon motif, complete the subtle theme.

In the suites, however, the most memorable interior design details lie in the expansive marble bathrooms complete with separate dressing tables. Deep, bowl-like soaking tubs lie next to floor-to-ceiling windows overlooking the modern Nanjing Eye Pedestrian Bridge stretching over the Yangtze River.

But the best river view can be found in the pool area on the 63rd floor. While swimming beneath the four-story glass atrium, natural light pours in through the sweeping, curved windows that are instantly recognizable as characteristic of Zaha Hadid’s work. While the architect might be gone too soon, her legacy lives on through her work around the world.

Check out more pictures of Jumeirah Nanjing below:

The bathroom in the Grand Deluxe Room  Victor Romero