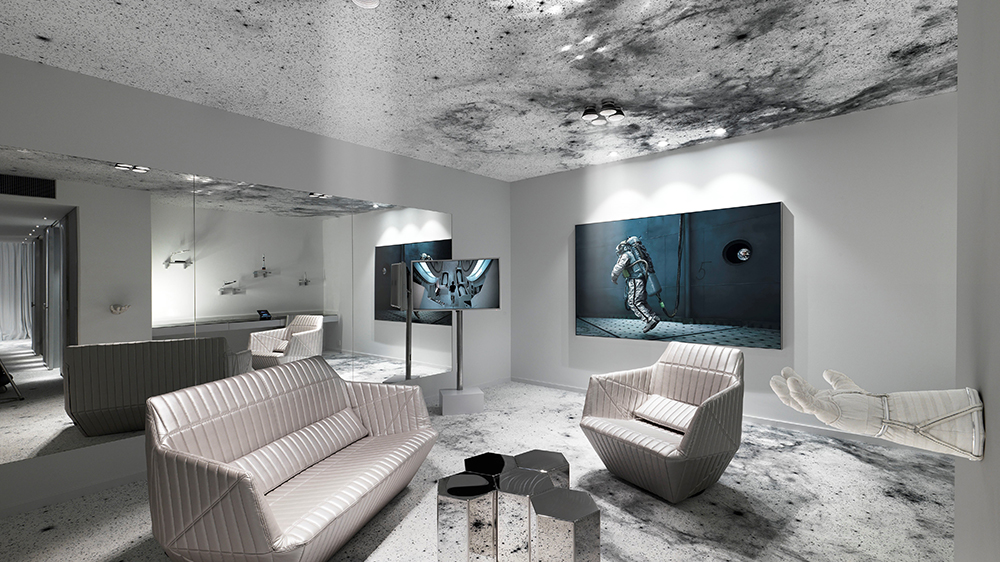 Have you ever wondered what it’s like to sleep in space? For those of us who aren’t astronauts, a night at Kameha Grand Zürich’s Space Suite in Switzerland is probably the closest we’ll ever get to an out-of-this-world overnight. Occupying the fifth floor of the Autograph Collection hotel, the 1,200-square-foot accommodation was designed by Michael Najjar, a German artist whose love for the cosmos has led to an entire series of works titled “Outer Space.” The artist even managed to acquire a ticket for a flight on one of Richard Branson’s Virgin Galactic voyages.

Upon entering the Space Suite, you’ll be welcomed by a female computer voice inspired by John Carpenter’s 1974 sci-fi thriller Dark Star confirming your “login” to the “ship” and giving instructions on how to handle it. Three pieces by Najjar depicting astronauts and objects in orbit will likely draw your attention first, but look a little closer and you’ll find fastidious details all around. For starters, carpeting has been attached to both the floor and the ceiling, depicting a motif of the universe inspired by images taken from the Hubble Space Telescope. The imagery has been inverted so that space is white and stars are black, which also plays a role in making the room feel bigger. Spotlights are modeled after rocket engines and have been manufactured using a 3-D printer, bringing in another level of futurism to the place.

There are also plenty of additional elements to drive home the theme, including a space glove extending out from the wall that doubles as a valet tray, four rocket models, a selection of books and movies all related to outer space, and a bed designed to look like it’s floating in midair. One design detail that might take it a bit too far for some guests, however, is the absence of windows in the suite. No doubt, a panoramic view outside to Zürich’s vibrant new Glattpark would completely ruin the space vibes—and, anyway, who wants to be brought back down to earth when they can be floating free among the cosmos?