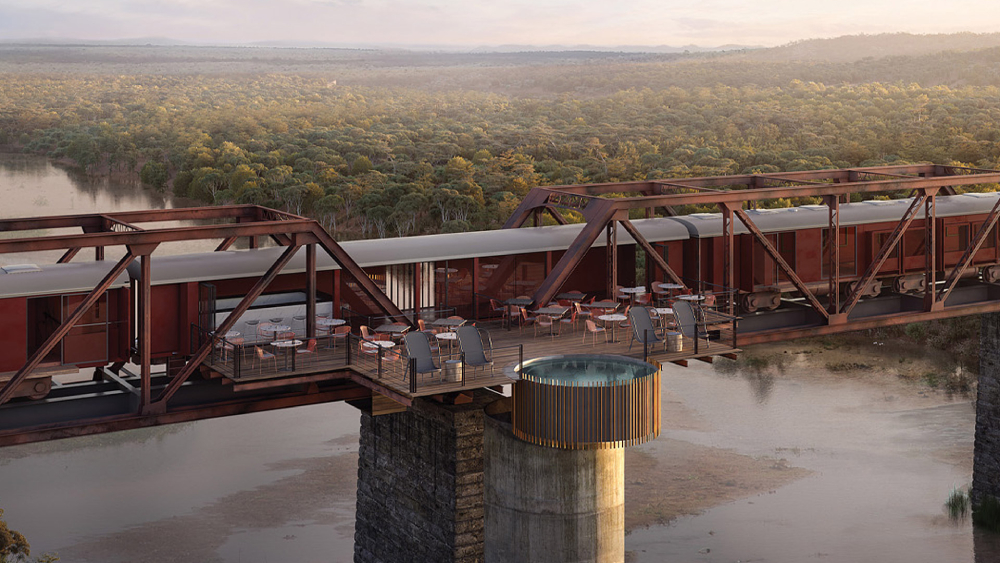 Lockdown may still be in effect for most of us, but that doesn’t mean we can’t start planning for future journeys. For the more adventurous among us, a novel boutique hotel built from a restored train station might be the wanderlust answer.

Situated in South Africa floating on a bridge above the Sabie River, the Kruger Shalati Train Lodge is a luxury hotel with 31 rooms, each of which has been constructed within a former train car. Filled with local art and custom furnishings crafted in the region, the interior design is meant to celebrate local culture.

“A very important part of the project will also be the way in which it will improve the lives of people in the local surrounding communities, who will be empowered through world-class training, skills development initiatives and ultimately job opportunities with the project,” general manager Judiet Barnes said in a statement.

Even though we’re experiencing a nationwide lockdown, the excitement of the outdoors grows stronger and stronger! We’re looking forward to heading back to construction on the Kruger Shalati Train on a Bridge. and experiencing the beauty of its surroundings. Below are some views from the inside of the first carriage on the bridge #KrugerShalati #UnderConstruction #TrainOnABridge

Located within the border of Kruger National Park––one of Africa’s largest game reserves at 7,523 square miles––the site of the hotel commemorates the park’s first visitors in the 1920s. It sits on the exact spot where the original train parked at night for guests to retire in the evening before heading to the next destination the following day. Though parts of the land were protected in 1898, it officially became South Africa’s first national park in 1926. It is one portion of an area UNESCO considers an International Man and Biosphere Reserve. Filled with prides of lions, herds of elephants, crocodiles and giraffes, the Kruger is an ideal park for safari.

Aside from the spacious rooms––which have glass walls for unobstructed views of the river and grasslands beyond––the Shalati Lodge also boasts a custom deck. Here, guests can lounge and order a drink from the bar or go for a swim in the modern pool with Africa’s natural wildlife teaming just meters below.

“This is our opportunity to revitalize and recapture an important part of Kruger’s history, while at the same time increasing both the range and quality of product on offer in the park. The product design is largely the differentiator in this project—not only have we not seen anything alike in our country, but neither is there anything similar in the world,” Barnes said in a release.

Originally announced to open in December of 2019, the hotel is expected to begin welcoming guests in September of this year.