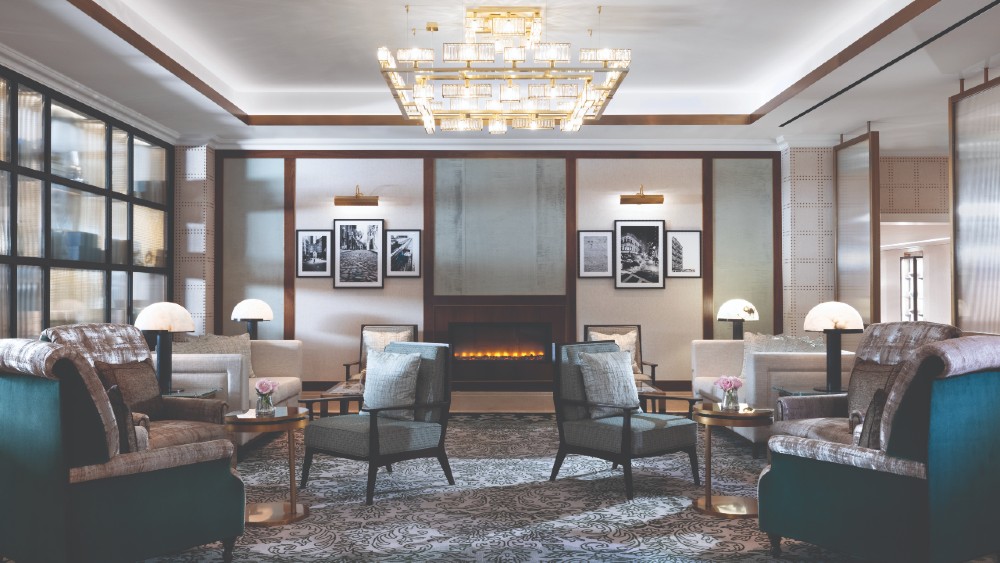 Boston has long drawn travelers interested in history, but guests staying at the Langham, Boston hotel don’t even have to venture outside to find it. The legendary hotel, which has reemerged after a two-year renovation, is set in the former Federal Reserve Bank of Boston, a Renaissance Revival structure built in 1922 and now a designated landmark. But with this redo, the hotel is both celebrating its roots and attracting a new breed of guests looking for contemporary luxury, standout cuisine and elevated service—all in the financial district, a part of town otherwise lacking in five-star choices.

The reimagining was helmed by architect and designer Dyer Brown and interior design and art curation firm Richmond International, who were charged with paying tribute to the building’s backstory while adding modern and often playful touches, So along with the original N.C. Wyeth murals that were first commissioned by the bank, you’ll find an extensive new art collection selected in collaboration with the Copley Society of Art and featuring works by local and regional artists. Some pieces or decorative items have themes like native wildlife or Boston sports, while others nod to the building’s Art Deco roots. The banking connection is also well represented, from green glass bankers lamps and lobby carpet’s leaf motif (which mimics a pattern on the dollar bill) to the eight portraits of former Federal Reserve Bank of Boston chairmen commissioned from noted portraitist Debra Kerice.

The living room of a duplex Loft Suite  The Langham, Boston

Those portraits, along with a seven-foot-tall, hanging wire sculpture of a Lady Liberty coin head, can be found in Grana, the second-floor Italian restaurant occupying the bank’s former grand hall. There, Executive Chef Stephen Bukoff and his team are crafting modern dishes for breakfast, brunch and lunch, including signatures like lobster ravioli and a bunch sandwich that’s stuffed with meats, cheeses and a poached egg, topped with pesto and served with Bloody Mary potato chips. Meanwhile, just off the lobby, the Fed is a British-inspired gastropub serving a lively menu—think reimagined, Korean-spiced corn dogs, lobster BLTs, seafood towers and bags of whoopie pies—to accompany the cocktails. They’ve even got a house-label gin and a beer, made with local partners.

The Renaissance Revival building once houses the Federal Reserve Bank of Boston.  The Langham, Boston

Upstairs, the rooms and suites have all be redone with marble bathrooms and a New England-inspired décor. Check out the popular duplex Loft Suites, which have two-story, brass-embossed windows original to the building, and the Chairman’s Suite, a penthouse with separate living and dining rooms and a baby grand piano. While not somewhere you can overnight, the new Cinema Suite—revealed in February—can be booked for a private screening session for up to eight guests, complete with snacks.

One of the last pieces of the renovation to be introduced was the Langham Club lounge, available to guests booked into Club Level rooms (or who have paid the daily $150 per adult, $50 per child supplement.) Located on the eighth floor, and overlooking Norman B. Leventhal Park, the quiet retreat serves multiple food presentations a day, from breakfast to evening cocktails and desert, including items sourced from the Grana and Fed kitchens; there’s also an all-day bar stocked with a wine, coffee, soft drinks and more.

The new club lounge serves food and drinks throughout the day.  The Langham, Boston

The Club will also host kid’s activities, wine tastings and cocktail making sessions, and the dedicated attendants can help arrange VIP excursions like a helicopter ride out to a Patriots game or a private yacht ride in the harbor—accompanied by signature Langham cocktails. Or you could just stay in and join one of the hotel’s complimentary heritage tours to learn more about the rebirth of this landmark. Rates start at $595 for rooms, $995 for Club Level rooms and $1,345 for suites.