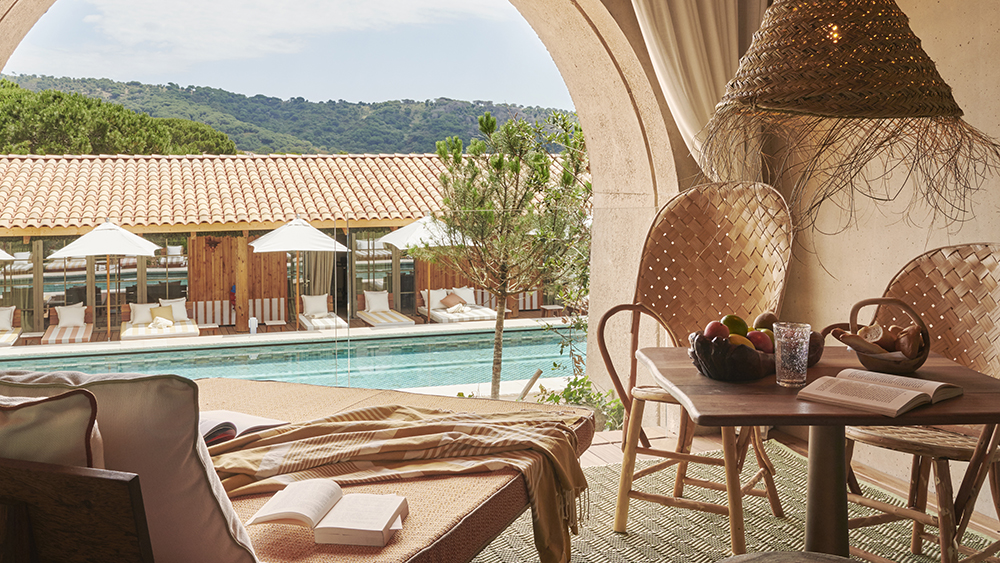 When French media magnate Alan Weill called up the superstar designer Philippe Starck, asking him to redesign the hotel he had just bought on the Saint Tropez peninsula, at first Starck turned him down. He did not like the Côte d’Azur, and had not stepped foot in Saint Tropez in 50 years. But when Weill told him about this particular area, La Croix-Valmer, where his family had gone for generations, Starck agreed to check it out.

Immediately, Starck fell under its charm: the quiet, sandy Gigaro beach, the expansive sea views, the wild green nature reserves, and none of the flashiness of Saint Tropez. “I rented a scooter, I went everywhere and I thought: it’s not possible!” he recalls. “It is like this place has been protected under a glass dome.”

The man known for designing everything from a squid-shaped lemon squeezer to the world’s most futuristic yacht says he receives about 100 offers to design hotels per year, and rejects 95 percent of them. Not only did he ultimately accept to design the Lily of the Valley, he became its artistic director.

He recommended tearing down the existing 1970s hotel and starting afresh. As always, he sketched out his design quickly and intuitively, in a day and a half. When it was fully built, he realized that unconsciously, he had re-created the idyllic universe of 1920s neoclassical paintings, with their Mediterranean architecture, Roman arches and people in togas playing lyres. “You get the impression it has always been here,” Starck says—and yet, at the same time, the hotel is absolutely contemporary.

The heart of the resort is a large, glass-enclosed restaurant, with warm beige tones, an eclectic mix of chairs and whimsical cushions, groupings of ceramic lamps and vases, and wood-burning fireplaces. The spacious, sun-dappled terrace gives onto a large swimming pool overlooking the sea, the coast curving like an embrace on either side, and islands in the distance. Two massive, age-old pine trees stand guard, and along with a rustic wooden trellis, provide plenty of shade.

A stairway leads down a hillside to groupings of guest rooms in various little “houses,” their flat roofs planted with vegetation. Thirty-eight rooms and six suites all have private terraces, and around half offer a view of the sea. Bathrooms are large and decorated with exuberant Portuguese marbles. Suite #27, where the Starcks sleep when they visit, has been dubbed the Jasmine and Philippe suite, and is decorated in the couple’s personal style, right down to the soundtrack.

Weill’s 27-year-old daughter, Lucie, was his partner for this project, and together they envisioned Lily of the Valley as a wellness center of the kind one finds elsewhere in Europe, but not in France. They wanted to combine wellness with French art de vivre—you might come to lose five pounds, but you will enjoy every minute of it. “We think we can get the same result without white blouses. We’re about pleasure,” Alain Weill says. “If your partner wants a side of beef and a glass of Bordeaux, it’s not a problem.”

The 21,000-square-foot “Wellness Village” offers tailor-made treatments, whether you are training for a marathon, looking to lose weight, or aspiring to get the perfect tan. It boasts a top-notch team of coaches and therapists, a gym with the latest equipment, and another pool for more serious pursuits, from lap swimming to aqua pilates. At the spa, you can choose between a hammam or a snow shower. The spa’s head masseur, Gilles Szafirko, received the “Best Hands in France” award in 2017, and once worked as a private masseur to Catherine Deneuve. After an hour in his care, one can only think she must be missing him terribly.

The Weills also managed to lure the genial Stéphane Personeni away from the Byblos Hotel to be their general manager. He, in turn, brought the Byblos’s executive chef, Vincent Maillard, who highlights the essence of local products with a style that’s clean, healthy and remarkably flavorful. Fish obtained from local fishermen is perfectly cooked, while his signature salad with garden vegetables, flowers and a pistou-inspired dressing is worth the trip on its own.

Lily of the Valley became a member of Leading Hotels of the World even before it opened, and the Weills intend to achieve Palace status for it as well. The resort is open all year round, which is rare for the region. If you must experience the glitz of Saint Tropez, the town is only a 15-minute drive away. But you can easily stay put, walking or riding an electric bike along the coast, practicing yoga by the pool, or reading by the fire in the winter, feeling a million miles away from it all.

Starck calls Lily of the Valley an island of happiness. “I think that this is one of my most successful projects,” he says. “This place is touched by grace. When you stay here, something happens—you never want to leave.”