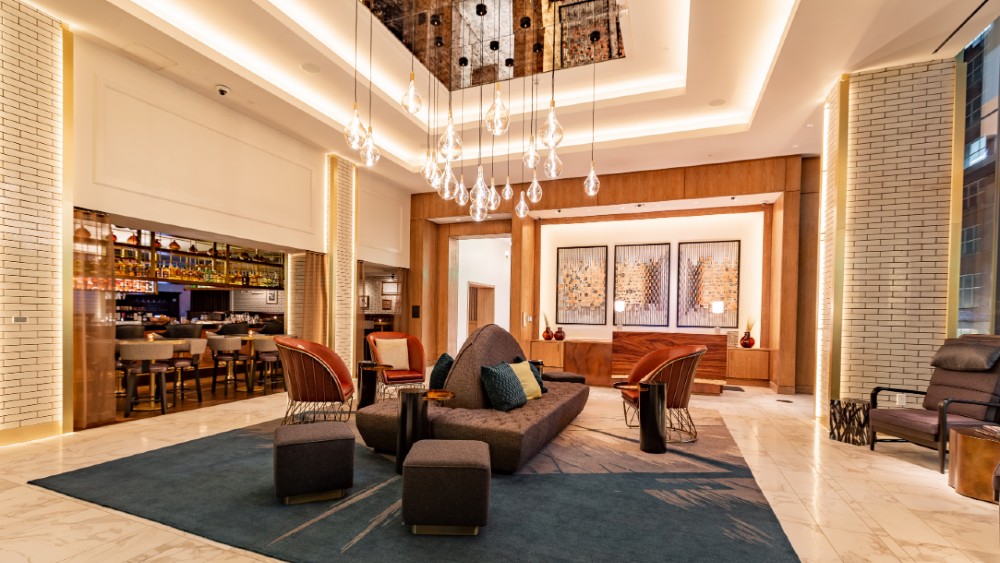 Known as Whiskey Row, a block-long stretch of Louisville’s Main Street was once the epicenter of the bourbon industry, which began booming in the city after the Civil War. Revivalist and Chicago School-style buildings with cast-iron storefronts lined the street, serving as storage for whiskey barrels produced in the nearby distilleries. Many of these structures were scheduled to be demolished in 2011, but an agreement between the city, local developers, and preservationists ultimately saved them—and helped create a district that’s become a signature part of Louisville’s charm. Now, one of those buildings—the former barrel house for J.T.S. Brown and Sons—has opened as the Hotel Distil, which pays homage to the bourbon industry in both historic and thoroughly modern ways.

Framed by a 1860’s-era façade that was saved following a 2015 fire, the 205-room Hotel Distil is the first Autograph Collection Hotel in Kentucky, and is bringing an elevated sense of hospitality to the city. Nods to the boozy past abound in the design, such as in the use of woods, black metals, and copper fixtures, while pre-Prohibition-style globe light fixtures and blown glass art pieces pay homage to Louisville’s glass blowing traditions. Rooms offer views of Whiskey Row and custom amenities, and the 11 two-room Connoisseur Suites have separate living rooms, work space, and spa-style bathrooms.

Guests checking in to a Connoisseur Suite can also enjoy an in-room private whiskey cart experience, during which a bartender will wheel in your choice of a selection of 10 premium name-brand whiskeys or some of the four signature Old Fashioned cocktails made with the hotel’s Private Single Barrel Picks and house-made bitters. All guests are welcome to gather in the lobby for the nightly toast to the repeal of Prohibition—held at 7:33pm, or 19:33, the year Prohibition ended. More libations can be found at Repeal, an oak-fired steakhouse featuring over 100 curated bourbons and classic cocktails, and Bitters End, the only open-air, all-season rooftop in Louisville.

For a truly special experience, book the three-day, two-night Exactly Like Nothing Else package, a $75,000 opportunity to taste from—and keep—12 bottles of bourbon, each from a different decade, from 1900 to 2010; some are one of just a few remaining bottles of that year in the world. A private limo will escort guests from the hotel to Ashbourne Farms for the master distiller-led tasting, accompanied by a picnic lunch prepared by the hotel’s chef using locally-grown products. Airport transfers, Bluegrass entertainment, some meals, a day on a clay course, and a personal goodbye gift are some of the other included perks, along with overnights in a Connoisseur Suite. Reservations for the package must be made at least two weeks in advance.