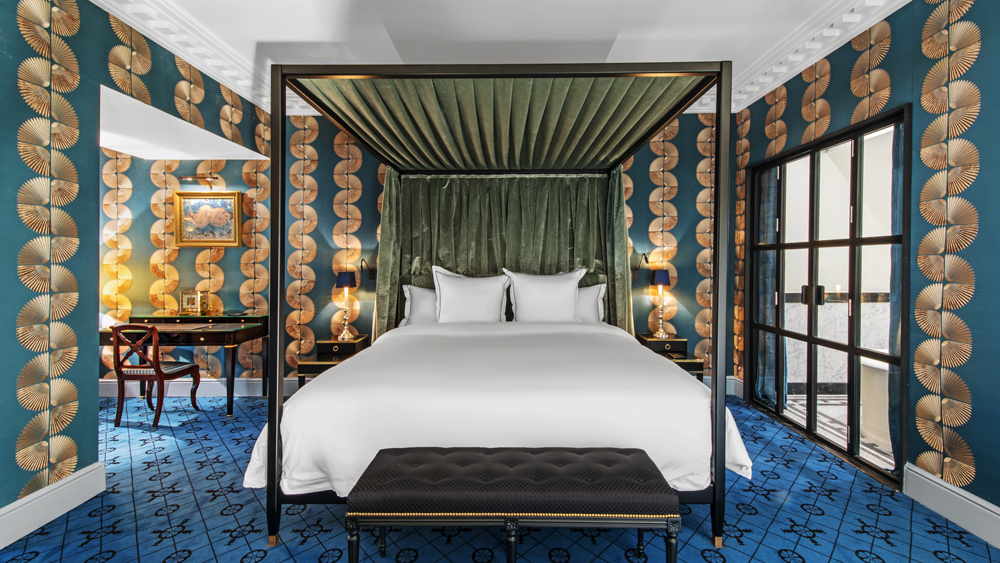 It’s not that Paris needs another luxury hotel. But the new Hôtel de Berri, which opened its doors this month, does make for a pretty convincing case to step outside of your usual haunts. The Luxury Collection property is located in one of the city’s most classically fashionable neighborhoods, tucked off of the Champs-Élysées in the heart of the Triangle d’Or shopping district. And despite interiors that joyfully eschew chic restraint in favor of playful minimalism, it fits in seamlessly with its well-heeled neighbors.

The hotel occupies a former 1970s-era office building on the historic rue de Berri, which has been home to aristocrats, royals, and prominent cultural visionaries. The address was formerly the site of a mansion that was the residence of Princesse Mathilde Bonaparte and the legendary couturier Elsa Schiaparelli, who famously collaborated with Salvador Dalí to put Wallis Simpson, Duchess of Windsor, in a scandalous (for the day) lobster-print dress on the eve of her wedding to King Edward VIII.

Designer and artistic director Philippe Renaud captures the extravagant, often boundary-breaking spirit of Schiap, Dalí, and other creative 20th-century luminaries who once called the property home with a residential ambiance that makes bold statements at every turn. Throughout the hotel, classical accents mix and match with elements from the French decorative arts period, Art Deco, and contemporary design to set a singular and utterly Parisian tone. Vibrant colors and strong prints cover walls and furniture, adding a nice contrast to the property’s eclectic collection of antiques, and an impressive array of artworks from a notable private collection adorn the walls.

This more-is-more approach continues upstairs, where each one of the hotel’s 75 guest rooms (including 35 suites) is individually decorated, underscoring the residential vibe and offering an inspired antidote to cookie-cutter minimalism. Many rooms also feature fireplaces and views of the property’s miraculously preserved private gardens, which span almost three-quarters of an acre, providing a serene, parklike oasis in the heart of the city.

Come dinnertime, guests can head to Le Schiap, which serves Italian cuisine by executive chef Michele Dalla Valle—a Tuscan native who lists stints at Plaza-Athénée and Le Meurice on his résumé—in a nod to the tastemaker who once lived at this address. A colorful fresco celebrating Parisian joie de vivre adorns the restaurant’s walls, while a neoclassical relief highlights the bar in Le Bizazz, where you can sip craft cocktails in an intimate space that opens onto the gardens.

And come next morning, guests can revive themselves from any overindulgences at the spa, which features a soothing tropical shower and two invigorating Turkish hammam baths.