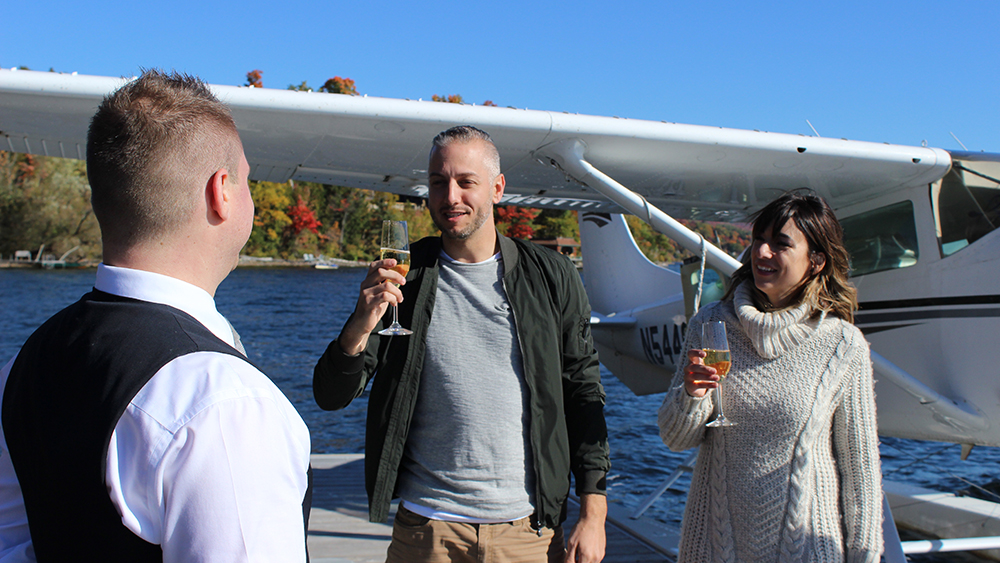 With their grand lobbies, top-hatted doormen and anticipatory service, many luxury hotels have you feeling like you “have arrived” before you even hit the check-in desk. Some, however, go the extra mile by making the arrival process part of the overall experience—ensuring the five-star touches begin from the moment you first make contact with the staff, and that memories are made before you even set foot at the resort. From a royal-inspired horse-drawn carriage ride to the chance to paraglide into reception (what better way to announce, “I am here!”), these nine hotels help you make a truly dramatic entrance.

A two-hour drive from Dubai brings you to the stunning Musandam Peninsula on Oman’s northern coast. After winding your way along mountain roads, you’ll get out at a viewpoint at the top of Zighy Mountain to catch your first look at the Six Senses Zighy Bay resort, a luxury “village” set at the base of the cliffs, with a sandy beach leading to the idyllic waters of the Gulf of Oman. (Venture out on a snorkeling trip and you might loop around to the other side of the peninsula, which fronts the Persian Gulf.) While atop the mountain, you can choose to continue on in the car to the resort, or suit up with a professional paraglider who will guide you around the edge of the mountains and over the bay, soaring at around 960 feet high. After soaking up the views, you’ll land near the hotel lobby, where you’ll be reunited with your luggage and can check-in—completing what is perhaps the most unique arrival at a hotel around.

Off-Roading in a Land Rover to The Equinox

This year, the iconic The Equinox in Manchester, Vermont, is celebrating its 250th anniversary (it was established as an inn in 1769), and in honor of that milestone, the resort has launched a whopper of an anniversary package. Available until the end of 2019, the “Celebrate Luxury” package—coming in at $250,000—includes a weekend buy out of one of the property’s two historic on-site inns, a dedicated concierge to curate custom itineraries, spa treatments for each guest, rounds of golf, an Orvis fly-fishing excursion, falconry walk, mountain hikes, customizes gourmet meals, and more. Most unique, though, are the ways you arrive and depart: Guests in the New York and Boston areas can arrive via private helicopter rides, while those in the general drive-market area will first enjoy a Land Rover off-roading experience at the brand’s course near The Equinox, then drive home in the newest Land Rover model available. (The company’s regional office will coordinate pick-ups of the vehicle once you’re home.)

The Nizam of Hyderabad—a vibrant city in central India—may now live in Australia, but his family still owns Falaknuma Palace, the royal family’s ancestral home. Set on a hilltop overlooking the old town, the palace and grounds are now operated as a luxury Taj hotel, but still feature many of the original architectural flourishes and ornate interiors built in 1894 by who was then said to be the richest man in the world. Some of those royal customs are still alive, too: to reach the main palace, guests leave their car transfers in a lot near the main gate, then board a horse-drawn carriage for a magical trot along the main colonnade to the grand front entrance. There, you’ll be greeted by a traditionally-attired staff and escorted into a world of flower-adorned courtyards, carved archways, and French Baroque furnishings to begin what’s sure to be an unforgettable stay. Side note: Taj has got the unique arrival experience down pat at some of their other properties, too, such as the romantic Taj Lake Palace in Udaipur, where guests are transferred to the “floating” palace hotel by private boat, then showered with rose petals at they enter the main gates.

A Private Garage and Entrance at the Resort at Pelican Hill

Spread out over 504 coastal acres in Newport Beach, California, the Italian-inspired Resort at Pelican Hill houses guests in secluded bungalow guestrooms and residential-style, two-to-four bedroom villas. All feature top-notch amenities and service, but guests of the villas enjoy some extra touches—including a private enclave entrance through which they can drive directly to their own garage, skipping the lobby for a quiet in-villa check-in with their round-the-clock butler. (Unsurprisingly, this makes the villas a favorite with low-profile celebs and VIPs.) If you’re flying in from elsewhere and don’t have a car in So-Cal, book the Keys to Luxury package, in which an escort will meet you at the Santa Ana airport’s private jet terminal (airfare not included) with a selection of luxury vehicles, from the latest SUVs to convertibles and a Porsche Boxster. Make your selection, then follow the pre-programmed dashboard navigation system to your glamorous, panoramic villa.

Courtesy of the Resort at Pelican Hill

A Private Helicopter to ITC Gardenia

Known as “the Garden City,” the southern Indian city of Bengaluru was long a haven for retirees and families, thanks to its temperate weather and laid-back charm. Over the last couple of decades, though, it’s grown into a bustling international business hub, with all the restaurants, nightlife, and designer shopping that comes with that distinction. It’s also home to the Peacock Suite at the five-star ITC Gardenia, considered the largest business hotel suite in the country. The hotel was also the first in India to have been granted permission to operate helicopters from its rooftop heliport—which helps make for an unforgettable VIP arrival. Guests of the two-floor Peacock Suite (which have included world leaders, CEOs, celebs, and other boldfaced names) can skip the notorious airport traffic and land at the hotel’s 22nd-floor helipad in 12 minutes, then get whisked into a private elevator directly to the suite. Once settled in, enjoy a private plunge pool, butler service, bay windows framing sweeping views, and other luxe perks.

Driving a Tesla to Blantyre

Built in 1902 as a family home, this Tudor-style mansion and surrounding estate in the Berkshires may now be an intimate Relais & Chateau hideaway—complete with spa, award-winning restaurant, and a wealth of year-round activities—but it still feels like a family retreat, thanks to the personalized service, comfy accommodations, and the relaxing evenings around the fireplaces, glass of port in hand. In keeping with that “we’re visiting friends in the country” feeling, Blantyre has partnered with upscale car transport service Bound to ferry guests from the Boston and New York City areas to the hotel in the latest model Teslas. Choose from group transfers (which depart from set pick-up locations) or buy-out the whole car to leave/arrive directly from your residence. Along with the bells and whistles that come with the Teslas, Bound stocks the cars with healthy treats and drinks, WiFi, iPads with Netflix, Bluetooth headphones, neck pillows, and other amenities to make for a comfortable—and stylish—ride to Blantyre. Contact the hotel directly to set-up the experience.

The River Boat to Hoshinoya Kyoto

Lush hills, a historic Buddhist temple, and a Zen garden centered around a 400-year-old maple tree set the backdrop for this serene luxury getaway, which is only accessible by boat. But unlike the gondolas of Venice or speedboats that ferry you to some private island resorts, this is a traditional canopied river boat that ferries you along the Oi River, once a thoroughfare for traders and travelers. The experience begins with a warm greeting at the Hoshinoya Kyoto Boat Landing just outside of town, then continues with a peaceful, 15-minute sail surrounded by verdant forested hills and rich birdlife, like flocks of kingfishers. It’s the perfect way to start the decompressing process from your journey—something that will continue at the property, which is home to chef-driven seasonal fare, pampering spa services, and sleek architecture inspired by the surrounding nature.

The Seaplane to Manoir Hovey

You don’t have to venture to the Maldives or another far-flung destination to soar to your resort in a seaplane—the thrilling experience can be enjoyed just north of the border in Canada. In the late-1800’s, many wealthy magnates from the American South made their way north to build their summer homes, bypassing New England (due to lingering resentment post-Civil War) and heading to the scenic countryside of Quebec. They brought with them their luxurious lifestyles, complete with servants, butlers, horse-filled stables, and a passion for pastimes like sailing and golf. Among the grandest mansions was The Birches, built by Georgia power magnate Henry Atkinson in 1900, and inspired by George Washington’s Mount Vernon. Today, the historic property and grounds are home to the Relais & Chateaux hotel Manoir Hovey, which guests can reach by seaplane from Montreal Airport. After boarding your private Cessna operated by Hydravion Aventure, you’ll fly over stunning landscapes to the Eastern Townships, landing on Lake Massawippi at the Manoir Hovey dock. Book the arrival and departure flights separately, or enjoy a hotel package that includes flights, one night’s accommodation, and a four-course meal (starting at $1,813 per person).

Due to its location high along the slopes of Deer Valley, in the private, gated Deer Crest community, the St. Regis Deer Valley is required by the town of Park City to transport guests up the mountain in a funicular—making for a spectacular entrance to the resort. The first commercial funicular in the U.S., the St. Regis version whisks guests up 536 linear feet in under two minutes, depositing them at the lower level of the hotel. But speed is not the only perk: the cabins have been crafted by Gangloff—carriage makers to Bugatti, Rolls Royce, and Alfa Romeo—and each features tinted windows with UVA and UVB protection, so you can safely soak up the panoramic views of Park City and Deer Valley.