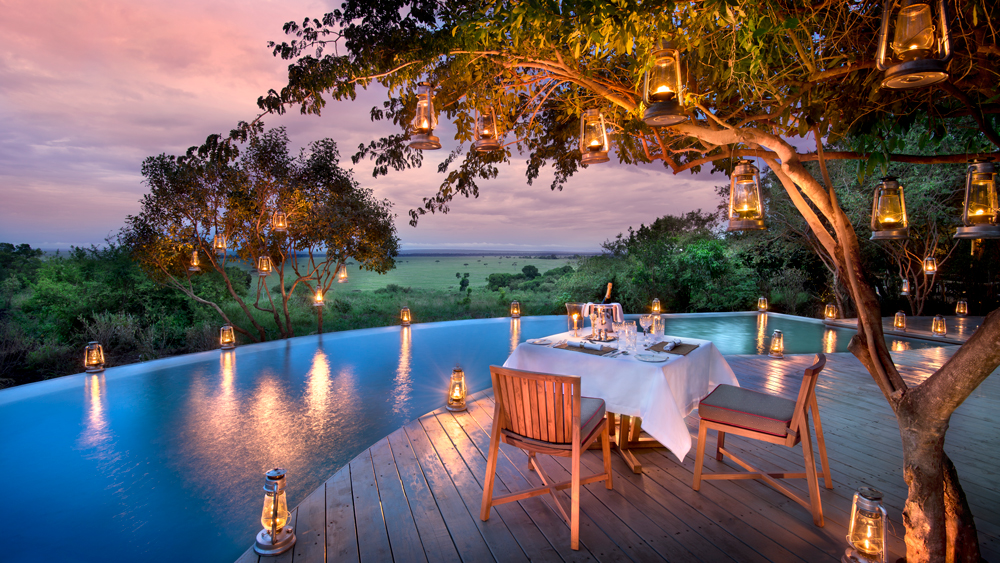 Guests of andBeyond Bateleur Camp—a favorite base for ogling the majestic Kenyan wildlife, especially during the summer wildebeest migrations—can easily spot the massive elephants and giraffes ambling across the plains of the Maasai Mara from the air as they prepare to land on the nearby private airstrip. The short drive from the airstrip to the camp is typically so packed with animals that it de facto turns into guests’ first game drive.

And while the wildlife and vast, stunning landscape of the Mara are certainly the stars of the show, pulling up to the newly renovated Bateleur Camp at the foot of the Oloololo Escarpment on the rim of the Great Rift Valley—to the sounds of a singing staff—is spectacular in its own right.

Twenty years after its first opening, renowned safari company andBeyond’s five-star crown jewel has been completely rebuilt. The new camp is stylish and lavish, without losing any of the romantic, Out of Africa safari feel that guests have come to love. The camp’s original designers, Fox Browne Creative, returned at the end of 2017 to produce its new, polished look and the resulting North Camp reopened in March 2018, with the South Camp set to open in June.

“It was time for a new look and feel but without sacrificing any of the soul and patina that the original camp had,” explains Chris Browne, co-founder of Fox Browne Creative. To accomplish this, Browne and his team refreshed and up-cycled a number of the camp’s original artifacts, antiques, and furniture pieces—think soft worn leather chairs, antique chests, crystal decanters, and Old-World globes—which now populate the communal lobby and dining tent. In addition to a refresh of soft furnishings, the dining deck, which sits right on the Mara, was enlarged to provide more covered seating with sweeping views of the plains.

The camp sits right on the edge of the Maasai Mara, boasting sweeping views and tons of wildlife.  Photo: Courtesy andBeyond

The most drastic transformation took place in the private guest tents. Usable floor space has almost doubled, with space being added on either side for a butler hatch on one side (hello, fresh coffee delivery in the morning without interruption) and a well-stocked mini bar with cozy seating on the other. The new ensuite bathrooms are particularly spectacular with grand copper bathtubs now looking out over private stone courtyards, which also house outdoor rain showers (those shy about being au naturel alongside the local flora and fauna needn’t worry, indoor showers are also included). Sunken daybeds on enlarged private verandas ensure that the breathtaking views of the animal-dotted Mara remain unobstructed from anywhere inside the tent—your bed is one of the best game spotting locations.

Design touches such as antique map wallpaper sourced from a design company in Johannesburg and elegant dark brass toggle switches that contrast against white marble surfaces are complemented by high-quality décor and furniture crafted by local artisans. A favorite detail is the hand-beaded patio door handles that are reminiscent of Maasai warrior sticks. Fox Browne sourced them through the one of the local women’s groups overseen by the Africa Foundation, andBeyond’s nonprofit arm that aims to support local communities. “That was a big order for them,” Browne laughs.

This type of consciousness crops up throughout the property, as both Fox Browne and andBeyond are extremely aware of promoting sustainability and boosting the local economy as much as possible when they work on a lodge. “We like to know that textiles are responsibly sourced and manufactured, and we want to support the local industry as much as possible,” says Browne. “In Kenya, there are Maasai beaders and leather workers that we like to use. A lot of that [work] is organized through the staff at Bateleur, who are [also] members of the local community.”

Other improvements include two new infinity pools with views of the plains where guests observe lumbering elephants while practicing their breaststroke. When the South Camp opens in June, it will include new spa salas (previously, only in-room massages were available) and a fitness center with floor-to-ceiling glass walls (that can roll back to let the fresh plains air flow in), as well as a brand-new Safari Shop offering luxury products from the region’s designers alongside locally produced crafts. Also due to launch in June is a highly anticipated coffee and gin bar, serving Kenyan coffee drinks by day and expertly crafted gin cocktails made with a variety of African gins by night. After all, the gin and tonic is a classic safari tipple originally used to prevent malaria, thanks to the quinine in tonic water.

But of course, we recommend not spending too much time in the admittedly gorgeous lodge because, well, you came for the Big Five. So hop in a jeep and take advantage of andBeyond’s expertly guided game drives, also available at night thanks to the camp’s 2,000-acre private concession. And be prepared for all kinds of surprise pop-ups in the bush (hint: stops may involve bonfires and cocktails).