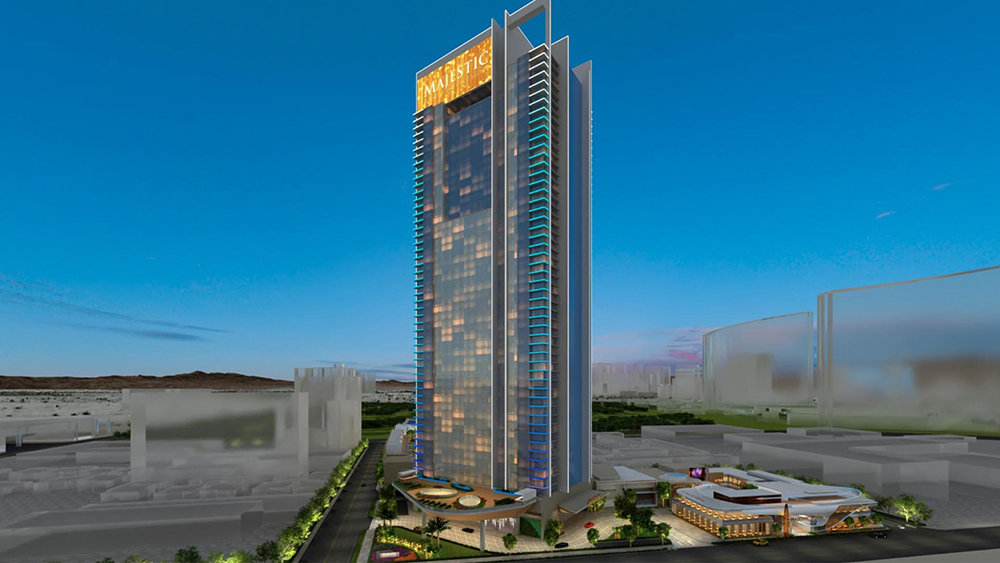 Opening a Las Vegas hotel that stands out from the pack isn’t easy. The Strip’s spectacle of excess can eclipse just about any venture, no matter how bombastic. That’s a lesson that Majestic Las Vegas, a new high-rise hotel in the center of Sin City, seems to be embracing.

At first glance, the new resort, which will break ground next May and open in 2023, ticks off all the bells and whistles you’d expect from a Vegas high-rise: There will be 720 suites, six stand-alone restaurants helmed by world-class chefs, a pool area with 50 cabanas and a space for live entertainment—in other words, standard Vegas. What sets the Majestic apart, however, is what is not on offer: There is absolutely no gambling.

In fact, as a counterpoint to its Sin City siblings, the Majestic Las Vegas will focus on health and wellness. The hotel will house a four-level, state-of-the-art fitness, nutrition and spa center to counter the excesses of the Strip. Guests can swap blackjack for indulgent full-body treatments and partake in relaxing yoga or spin classes instead of roulette.

“It is time for Las Vegas to provide a luxury option for those who visit our city who want something that is non-gaming,” says Las Vegas local and developer Lorenzo Doumani.

The soaring 620-foot resort was brought to life by renowned American architect Paul Steelman and takes inspiration from the iconic La Concha Motel that was designed by starchitect Paul Williams and built by the Doumani family in 1961. The finished building will pay homage to this heritage while integrating contemporary design.

Another drawcard will be the corporate Sky Suites, situated on levels 51 to 60. With up to 25,000 square feet of fully customizable space, the suites are a meant to be a home for Las Vegas-based companies. Owners have access to all of the hotel’s amenities, as well as a private concierge, an exclusive Owner’s Club and the sweeping panoramas of the Vegas skyline.

The hotel will be built on the six-acre site formerly occupied by the Clarion Hotel, which Doumani demolished four years ago. The central location sits directly opposite the new Las Vegas Convention Center—due to open in 2021—and just two blocks from the Strip.

As you might expect, the Majestic’s outsize ambitions will be matched only by its price. The hotel is expected to cost a whopping $850 million by the time it opens in early 2023. But, if all goes smoothly, in a few years, what happens in Vegas can be cleansed in Vegas.