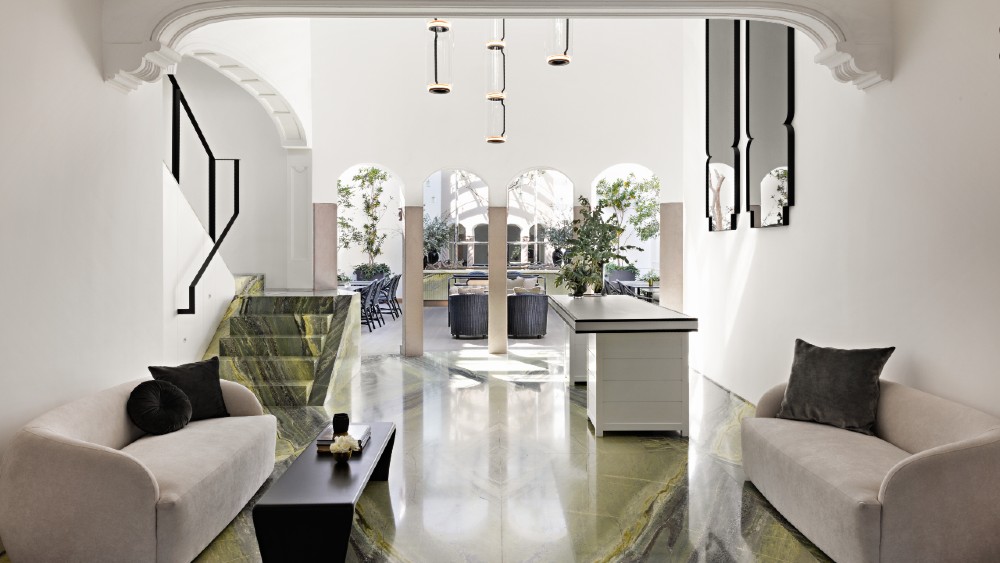 For many travelers and locals alike, Mexico City’s Polanco is an easy pick for their favorite neighborhood. Set near Chapultepec Park and the main Paseo de la Reforma thoroughfare, the leafy area is home to upscale shopping, diverse restaurants, intimate parks and quiet side streets lined with elegant historic mansions and apartment buildings. It’s these streets that real-estate investor and developer Octavio Aguilar—a 25-year resident of Polanco—walks to spot his next projects. Since the early 2000s, Aguilar has sought out buildings that have been historically designated (meaning, they can’t be torn down) and then, as he says, “purchases and protects them” by remodeling and restoring them to their original glory, consequently finding them a new purpose; many have been turned into offices or boutiques, for example.

So when Aguilar heard that a stunning 1940s private home facing Lincoln Park—built in what was called the “California” style, with plenty of Spanish colonial revival elements—may be available, he worked hard to ensure the mansion’s then-owner felt comfortable that he’d be turning it over to the right hands, as the place had only ever had two owners in its lifetime. Once it was purchased, Aguilar’s team worked to “strip it to the original era—many things had been added over the years—and bring it back to life.”

The facade of the historic mansion  Casa Polanco

“It’s more of a passion project than a business,” Aguilar says now of the 19-room boutique hotel, with is set to open on June 1. “I wanted to have this place in our family. There’s no other place in town that can give you this sense of place.” Indeed, Aguilar’s passion for architecture, art and design—and his lifetime of travels—fueled every part of the hotel, from the selection of handmade mattresses from California and an incredible green-hued marble for the entryway to the world-class art and photographs found in the rooms and public spaces, many of which come from Aguilar’s private collection. Furnishings include pieces custom-made by award-winning industrial designer Hector Esrawe, noted cabinetmaker Alfonso Marina and mother-daughter interior design duo Monica Romo and Monica Novelo. “I didn’t want things from hotel providers,” Aguilar notes. “I wanted people who made things for homes.”

The library has an all-day honor bar.  Karyn Millet

Not having operated a hotel before, Aguilar enlisted the expertise of Hamak Hotels, which manages luxury boutique properties around Mexico, to bring his vision to life. The mandate for all involved, though, was that the place should feel like a private home. To that end, there’s no traditional restaurant that’s open to the public; instead, popular chef Martha Brockman (who studied with Julia Child and runs the Mandolina restaurant just across the park) has created an all-day menu that in-house guests can enjoy anywhere they like, from the rooftop terraces to the ground floor conservatory. Rates include a generous breakfast with hot and cold options—“and you can come down in your bathrobe to enjoy it,” the staff is quick to note—as well as a late-afternoon tea hour with snacks, teas and wine. The beautiful library is stocked with an honor bar for when you want an after-dinner tequila, and in the morning, a carafe of coffee or tea and some treats are left outside your door as a pre-breakfast “eye-opener”. Taken together, it gives Casa Polanco a true private club feel, like you’re in on the city’s best hotel secret.

Rooms are spread out between the original mansion and a seamless contemporary addition, and vary in size and view, but all have creature comforts like 600-thread count Egyptian cotton sheets, Bang & Olufsen sound systems, rainfall showers, Nespresso machines, bath products custom made by high-end perfumer Xinú and a complimentary mini-bar with drinks and chef-made snacks that gets restocked daily. Top options include the Lincoln Park Suite, which has a large furnished terrace overlooking the park.

The team can also organize private excursions and VIP experiences around town (partnerships are still being finalized) and can arrange for private yoga and Pilates sessions at the hotel and massages in the rooftop spa cabin via an excellent local provider. Guests can even browse a selection of menus from neighborhood restaurants to order in a meal, which the staff will then pick-up, plate and serve wherever you would like it—just like if you were staying at a friend’s house. Rates start at $558, including breakfast, tea hour and minibar.