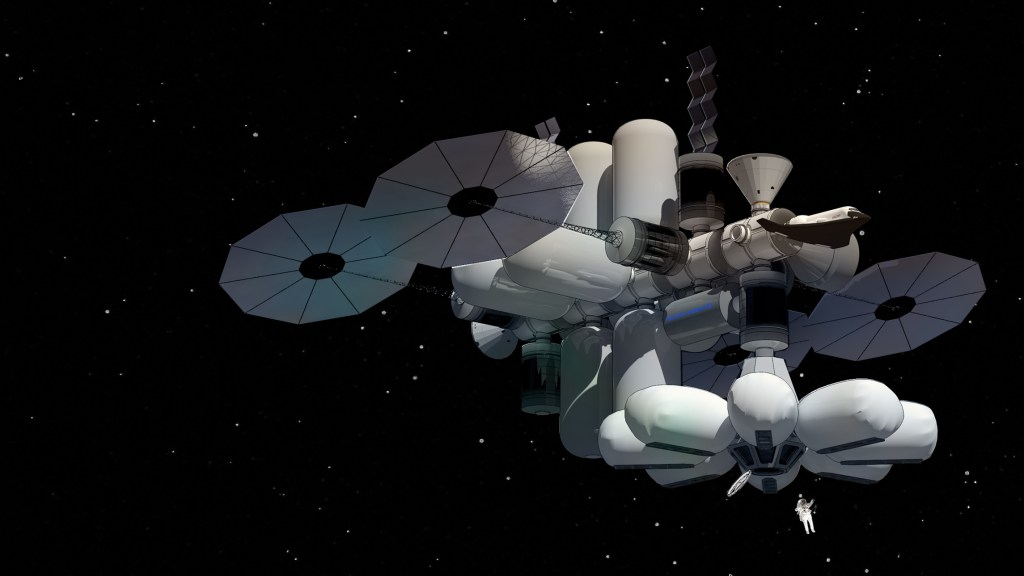 Ready for AmanSpace? Or the Four Seasons Low Earth Orbit? Valentina Sumini and her colleagues at the Massachusetts Institute of Technology (MIT) have just won the graduate division of a NASA competition to design a luxury hotel for use in space. But to hear her tell it, the biggest challenge isn’t the “space hotel” part—it’s the “luxury hotel” part. “The main challenge is understanding the desires and expectations of future space tourists and making their dreams a reality,” she says.

Sumini and the interdisciplinary MIT team designed the Managed, Reconfigurable, In-space Nodal Assembly (MARINA), a commercially owned and operated space station that contains a luxury hotel. The flower-like structure at the lower right of the rendering belongs to the hotel. Each of its eight petals is an inflatable private room, and the black strips on the bottoms of the petals are windows that face Earth. The complex, as pictured, could accommodate eight to 16 guests and would have a staff of four: a valet, a doctor, a cook who doubles as a personal trainer, and a media expert, who would ensure that your Skype calls go through and your Zero-G selfie posts to Instagram as you planned.

The center of the flower is the hotel’s cupola, a shared space with peerless views and a telescope to take it all in. Guests who undergo the proper training before they arrive can borrow spacesuits for an extraterrestrial stroll. The gym—a must-visit in space—would project images of the Moon or Mars before you as you work out, or you could enjoy the view from its Earth-facing windows. Guests could plan romantic in-room dinners or head to the restaurant. Bookings would last for two weeks and would initially cost around $5 million per person—a price that includes travel to and from the hotel. The MIT team expects costs to fall as low as $2 million per person over time.

Regardless of which luxury hotel brand commissions the MIT design, the property will have a sleek, minimalist aesthetic. “Floating can be a lot of fun, but it can be dangerous as well. You can be injured very easily,” she says, explaining that filling the interiors with furniture and decorative objects doesn’t make sense in a Zero-G setting. “We imagined fluid spaces with convex surfaces. We use nets for storing objects. But it has to be a luxurious experience. It has to be elegant.”

That said, now is too early to plan your out-of-this-world vacation. Even if work started on the hotel tomorrow, it would take about seven to eight years before MARINA would be ready to open its airlock to the first spaceship full of guests.