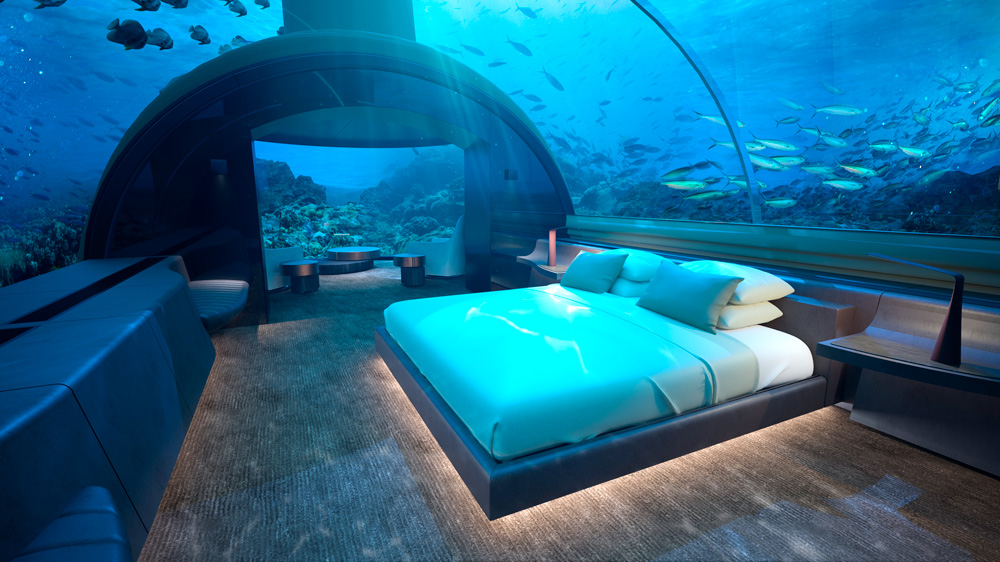 This year we saw no shortage of spectacular hotels open around the world–from properties that dig deep underground to classic resorts that dial what’s on offer far past pillow menus and round-the-clock room service. Here we’ve picked just five of our favorites. That’s a tall task considering the stiff, seriously over-the-top competition they went up against. Read on to discover just what caught our eye, because though even we’re loathe to admit it, the hotel really does make the vacation.

A disclaimer here: the first hotel on our list isn’t actually a hotel at all. Instead, it is a 1,200-year-old UNESCO World Heritage–certified temple complex in the heart of historic Kyoto. Through InsideJapan Tours, the entire Ninna-Ji Temple can be booked out for a night for just five guests, who will have the opportunity of a lifetime to get an up-close-and-personal look at the ancient traditions of the Shingon Sect of Buddhism (which was a school preferred by the Japanese elite, emperors included). During their night at Ninna-Ji, guests will have access to areas typically closed to the public, and will treated to all of the hallmarks of traditional Japanese high-society.

Its hard to imagine how most Maldives resorts could get better–after all, sweeping turquoise views of the Indian Ocean and the quiet atmosphere doesn’t need much embellishment (besides, perhaps an overwater bungalow or two). That said, Conrad Maldives Rangali Island made waves when it debuted the world’s first underwater villa earlier this year. Aptly named the Muraka (“coral” in Dhivehi), one of the villa’s suite-style bedrooms now sits snugly alongside the reef at the bottom of the Indian Ocean–an engineering feat that took $15 million to construct. The rest of the accommodation sits above the water, and is brimming with over-the-top perks like a private pool, gym, kitchen, bar, and butler.

Though Hotel Crescent Court in uptown Dallas isn’t exactly new, this year the property unveiled a decadent new look courtesy of a $33-million dollar top-to-bottom renovation. The grand dame, which was originally built with no expenses spared by oil heiress Caroline Rose Hunt in 1985, now features a modern look that expertly plays into its elegant roots: think rooms and suites outfitted in contemporary neutral furnishings accented by antiques and art from Hunt’s wide-ranging personal collection, 12 restaurants, and a 22,000-square-foot spa.

2. The Retreat at Blue Lagoon Iceland

By now we’re sure you’re aware that the Retreat at Blue Lagoon–which opened this spring in Iceland’s most instantly-recognizable landmark–blew us away. In case you need further proof, here’s a quick rundown of it’s most over-the-top elements: Chicly designed suites that open out directly onto the lagoon, providing 24-hour private access to those steamy blue waters; spa treatments that put the power of the lagoon to work (think in-water treatments, hot and cold plunge pools, and lava rock steam rooms); and a subterranean wine cellar built into a cavern of frozen-in-time lava from an explosion in 1226.

This year, space travel became suddenly more of a possibility than ever thanks in part to a Philippe Starck–designed hotel set to open on the International Space Station in 2020. Masterminded by Houston–based company Axiom Space, the hotel will host seriously intrepid travelers (whom Axiom calls private astronauts) for 10- or 60-day trips aboard the space station. After 15-weeks of intense on-earth training, guests will see their sci-fi fantasies come to life, settling into the rhythms of life in space as the station orbits the earth–a view that will be visible from nearly every corner of the hotel.