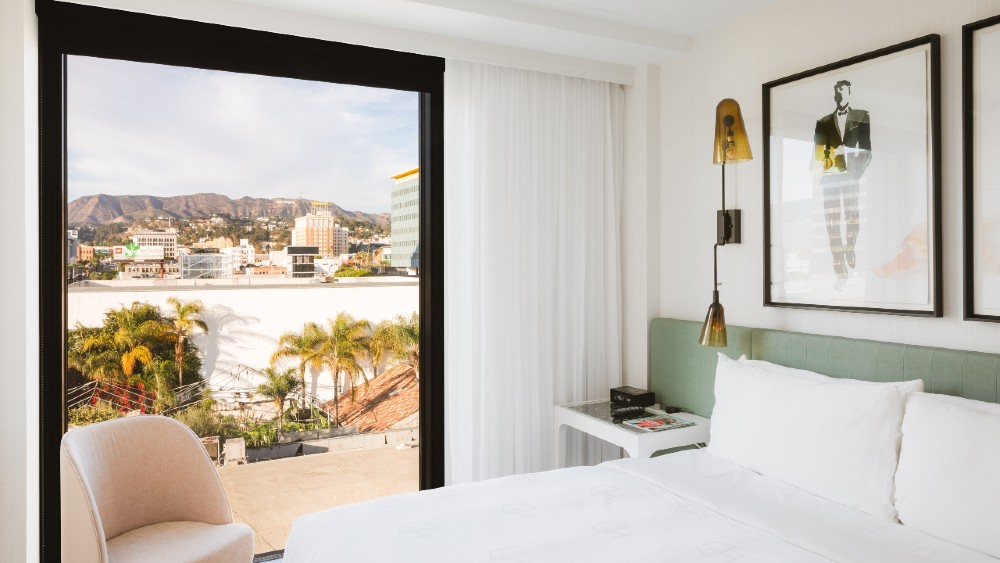 The Los Angeles hotel scene is in the midst of an exciting boom. Since the beginning of 2021, the number of rooms in the city has grown by more than 2,100, with new boutique and chain properties popping up in every neighborhood. Notable arrivals earlier in the year included the buzzing Pendry West Hollywood, with its Wolfgang Puck eateries and private members club, while highly anticipated openings on the books for 2022 include the Whisky Hotel and the Conrad Los Angeles.

With all these new options, not only are there more places to hang your hat in the City of Angels, but it’s now easier to explore an unfamiliar part of town or split your visit between two different areas. But how to choose? With this list, we’re spotlighting five recently opened properties that will each appeal to a different travel interest, from food and culture to social media clicks. Whether you want to be among the first to check out a new culinary hotspot or are in need of a wellness getaway, there’s an LA hideaway here for you.

For the Foodie: Thompson Hollywood

Opened in August, the 174-room, 16-suite Thompson Hollywood has created a little Hollywood world that guests never have to leave. Flavor-focused travelers in particular will find plenty to enjoy under this one roof, from a mid-century-glam lobby lounge to Bar Lis, a sexy spot adorned with lush greenery and chic furniture hidden away far above the city. Right now both only serve light bites, but in January, Chef Lincoln Carson, formerly of the acclaimed Bon Temps, will open his much-anticipated French brasserie Mes Amis here, where he will utilize local farm- and market-sourced ingredients and plenty of fine wine to create classic French menus with a Southern California twist. Suites start at $479.

For the Culture Hound: The Shay

This property opened on October 6 as part of the 500,000-square-foot Ivy Station mixed-use project in Culver City, which was designed to be a hub for shopping, dining and entertainment; the latter will include concerts, movie nights, craft fairs and more. The development is also close to the noted Culver City Arts District, home to galleries, museums, performing arts venues and culture-focused walking tours. Taking its cues from the community, the 148-room the Shay features 35 murals, textiles, installations, and portraits made by local artists as part of its décor. The hotel will also host a rotating roster of programming, from pop-up barbershops in the lobby to a rooftop DJ series. Suites start at $500.

Originally opened in 1966 (Sonny and Cher performed here in the ‘70s), the iconic, five-star Fairmont Century Plaza in Century City was part of a recent $2.5 billion makeover project, and just reopened September 27. The renovated property boasts 400 rooms, 63 private residences, the traditional French-inspired brasserie Lumière and, best of all, a gorgeous 14,000 square-foot spa and wellness center. This spacious sanctuary includes a Himalayan salt room, a hammam, a detoxing sauna “sanarium”, treatments like sound baths and a Technogym Fitness Center. And the services go beyond mere pampering: In 2022, an on-site medical spa will offer guests everything from body contouring to fillers. Rooms start at $700 per night.

The long-awaited Downtown LA Proper recently opened its doors on downtown’s Broadway Corridor, in a 1920s Renaissance Revival building. The 148 rooms and suites show off designer Kelly Wearstler’s signature style—a little bit vintage, a little bit West Coast, with an intense celebration of color and a sophisticated maximalism. Each of the suites flaunts it own vibe, too. For $5,000 a night, guests can book the 1,313-square-foot Proper Basketball Court Suite, a reimagining of the building’s original vintage basketball court with a Spanish-influenced interior design. At double that price and nearly double the space, the Proper Pool Suite has an actual swimming pool in it, as well as a ceramic tile mural by LA artist Ben Medansky. Rooms start at $359, suites at $1,209.

For the ‘Gram: The Godfrey Hotel

If you stay at the art deco-style the Godfrey Hotel in Hollywood, make sure you have your camera, or at least your iPhone. When you walk in, you’ll definitely want to pose with the “I Love You” sculpture, then freeze your best dance move beside the life-sized, brushed bronze “Dress and Tuxedo” sculpture that depicts an Old Hollywood dancing couple. The nearly-seven-foot-tall, hand-painted golden wings in the lobby are perfect for your angel shot, too. Come sunset, hit the I|O Rooftop, which has a pool and bar. Spanning over 12,000 square feet, it’s the largest public rooftop venue in Hollywood, and will allow you to snap views of Hollywood, Century City and Downtown LA that are guaranteed to garner plenty of likes. Rooms start at $194.