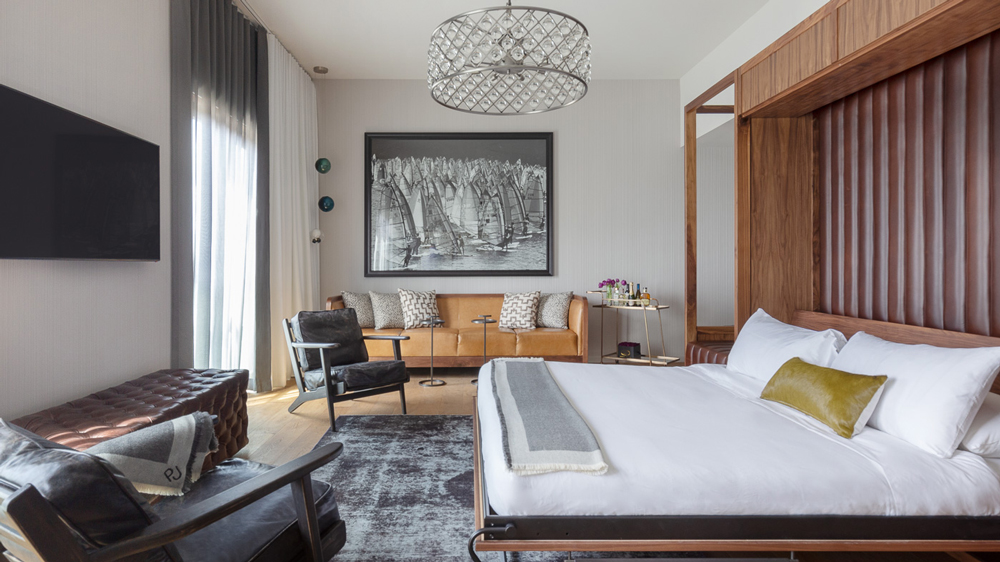 For all that’s going on in Silicon Valley as the de facto headquarters of the global tech community, it hasn’t been—perhaps unsurprisingly—the most alluring destination when it comes to style (though it’s elite are finally ditching their hoodies for a more polished look) and design. But the opening of the Park James Hotel, which joins the Facebook campus in Menlo Park, might just change that.

The 61-room boutique property has a lot going for it, introducing a ton of unexpected amenities meant to impress its tech-savvy clientele, all of whom will likely be staying on business. There are in-room iPads, digital keys, and fun bespoke services like in-room pour-over coffee instead of capsule-based espresso machines. In fact, before settling with San Francisco–based Ritual Coffee Roasters, the Park James team met with nearly 10 other potential partners, most of whom considered providing in-room pour-over to be too challenging to pull off (and we’re certainly thankful for their persistence in ditching the K-Cups). The dedicated concierge can also partner guests with executive coaches, just in case they need a little bit of extra help preparing for that big VC pitch.

But beyond the laundry-list of thoughtful perks, the biggest surprise of all might be how design-forward the Park James is—so much so that it could be a draw not just for techie travelers but also for aesthetes. The look, a casually luxurious interpretation of California modernism, was brought to life by San Francisco­–based Parisa O’Connell Interior Design. The team created a narrative that chicly nods to a variety of references—like the area’s equestrian heritage and Ireland, the home country of Dennis James, one of the founders of the city (and perhaps the hotel’s namesake).

This seemingly mix-and-match style blends seamlessly throughout every corner of the hotel—starting at the lobby’s accent wall, where a studded wood base adorned with pretty custom glasses and leather-strapped flower vases prove to be irresistible Instagram bait for nearly everyone who walks by. Nearby, there’s also another wall covered with a silhouette of two figures arm wrestling. Taking a closer look, one is actually a woman, meant to represent the female presence in the male-dominated world of tech. In the guest rooms, the designers offer up subtle luxury—think wall-to-wall headboards in warm chocolate leather or West Coast oak panels, crystal chandeliers, desks modeled after vintage travel trunks, cozy throws made of wool from Ireland, and tufted low-slung seats cloaked in bright emerald upholstery that might conjure up visions of the Irish countryside.

And though guests will likely be heading into the city for power dinners at San Francisco’s new Michelin-starred restaurants, the hotel’s equally stylish Oak + Violet restaurant, which features a menu highlighting simple takes on local ingredients and plenty of craft cocktails, holds its own if they’d like to stick closer to home. When taken together, it all adds up to a place that—though business-focused—is undeniably cool.