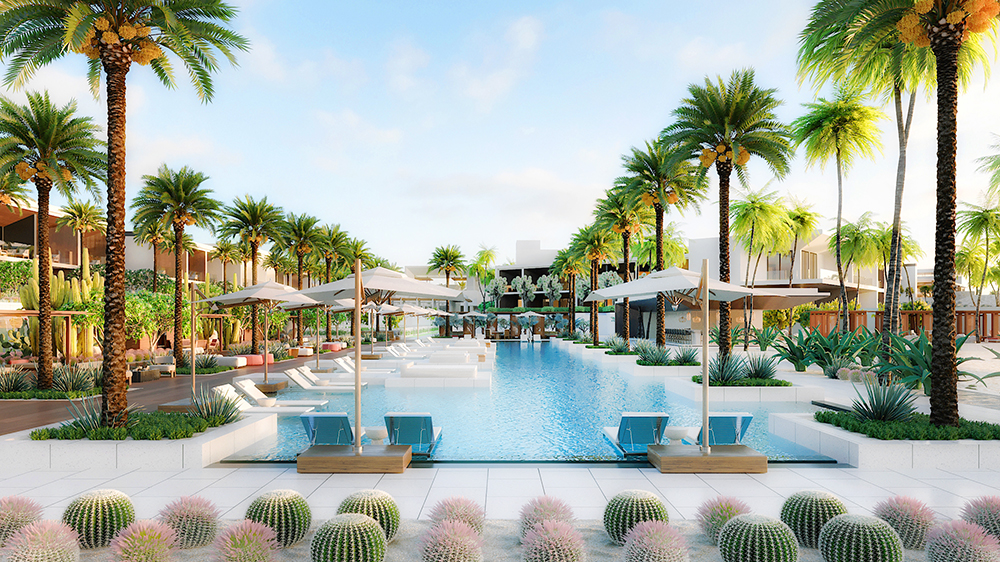 There are few chefs as synonymous with the good life as Nobu Matsuhisa. The man known for perfecting miso black cod is more than a household name in modern Japanese cuisine—he’s a master of high-end hospitality, too, thanks to his Nobu Hotels, which he launched with partner Robert De Niro in 2013 with a celeb-infused grand opening at his first hotel in Las Vegas. Since then, the power duo has slowly expanded, most recently opening a ryokan-inspired property in Malibu and a relaxing haven on Ibiza.

Now, Nobu Hotels has arrived in another popular beach destination. For its debut in Latin America, the chain has chosen Cabo San Lucas, Mexico. This idyllic stretch of the Baja Peninsula has traded in its reputation as a rowdy spring break destination for a more sophisticated name. Joining the next generation of luxurious resorts in the area, Nobu Hotel Los Cabos maintains its aesthetic of contemporary Japanese minimalism while using locally sourced materials. Each of the 200 accommodations comes with a furnished balcony and either a teak onsen-style soaking tub or a standalone bathtub. Certain categories of rooms and suites come with the bonus of direct access to the property’s main pool or their own private oasis. But for the ultimate digs opt for either the one- or two-bedroom Nobu Suite. With a large stone fireplace, separate living room, dining area, full kitchen, 15-foot ceilings, and ocean views, the light and airy spaces provide a rare personal refuse in buzzing Cabo.

Guests will also have access to four pools, private cabanas, and a spa that spans nearly 13,700 square feet. From an extensive list of treatments using Natura Bissé products to the indoor and outdoor hydrotherapy areas, this sanctuary will be the ultimate spot to unwind and relax. And once you’ve worked up an appetite, you’ll have several options to choose from. There’s of course a Nobu restaurant, complete with a 10-seat teppanyaki room for private events, in addition to an outpost of California’s highly popular Malibu Farm, both of which can be savored via room service should you want to spend more time in your sumptuous quarters. For more casual options there’s also the Nobu Cafe and a pair of eateries by the pool and beach, plus several bars . From its sleek design to its wealth of amenities, this just may be Nobu’s finest work yet.