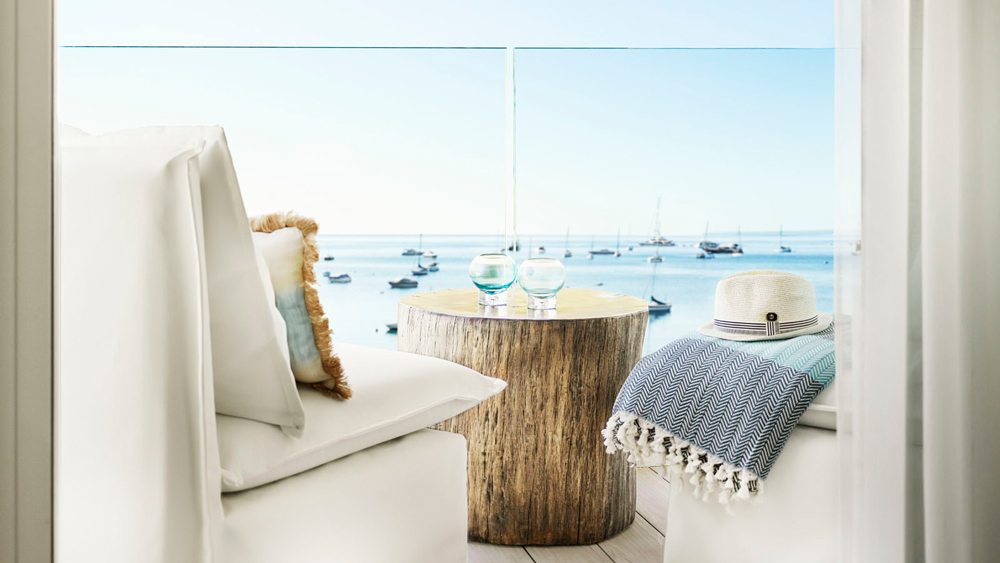 Originally launched as a boutique hotel-within-a-hotel at Caesars Palace in 2013, Nobu Hotels has since opened an impressive collection of luxe resorts and urban stays around the world. Though each features its own flair—ranging from sexy dark woods and over-the-top add-ons in Las Vegas to tranquil soaking tubs and airy skylights at Malibu’s Nobu Ryokan—all are a mix of the cool minimalist design and the buzzy see-and-be-seen atmosphere of chef Nobu Matsuhisa’s roster of iconic restaurants.

Recently, the brand has picked up the pace of its global expansion, opening properties in London, Ibiza, and Marbella in quick succession. Though this new trio opened throughout 2017 and 2018, Nobu did not consider them to be officially launched until a traditional sake ceremony—where custom sake barrels are opened and shared with the guests and the owners to ensure good fortune—was held at each location earlier this month.

Robb Report joined the brain trust behind the booming brand—which is set to debut hotels and residences in Barcelona, Riyadh, Los Cabos, Chicago, Toronto, São Paulo, Atlanta, and Tel Aviv all by 2020—for the ceremony at the breezy and brand-new Marbella property. And once cofounders Nobu Matsuhisa and Robert De Niro (who have worked together for nearly a quarter-century), Meir Teper, and Nobu Hospitality CEO Trevor Horwell cracked open the barrel and everyone had a drink in hand, we sat down with the team to learn just how it all came about.

Nobu opened its first hotel in Las Vegas just five years ago. Why do you think the brand is suddenly expanding at what seems like an exponential rate?

Trevor Horwell: It’s a great brand! But seriously, everyone is very cautious in the beginning. First, we had to open the Las Vegas hotel and were fortunate that it was a big success. So from there we had huge interest from investors—some of them in the hotel business, some of them customers. Nobu has grown very fast because of the belief in the brand.

When did you realize that getting into the hotel business would be a smart move?

Robert De Niro: The story actually started with Trevor. I was impressed with him—we all were—so we went to the San Diego Hard Rock Hotel, which Trevor was running at the time [for the opening of the Nobu restaurant there]. I was asked what I thought of the Hard Rock, [and I said,] “The Hard Rock? I’m not here for the Hard Rock; I’m here for Nobu.” And then I realized, why are we doing this for other brands? We should be doing this for ourselves or at least attempting to do it [and] make it a condition that we want certain locations and create a hotel and a restaurant.

Why did you decide to include residences at some of the properties set to open over the next few years?

Meir Teper: For the moment, we are doing residences in Cabo, São Paulo, and Toronto. It’s natural for developers to build hotels then add residences since it helps with the financing. But for the customer, what’s attractive is when they buy an apartment, house, or villa, they also have access to exceptional Nobu services at the restaurant and in the rooms. No one else can offer that.

TH: Also, we had a huge database when we went to Toronto, and almost 80 percent of the buyers were international customers that knew Nobu quite well and wanted to buy into that lifestyle.

Do you feel that the Nobu Group is attracting a younger generation of luxury travelers?

MT: Absolutely. We have a lot of old customers that bring their children, and then those children grow up and come on their own.

TH: It’s true. Meir lives in Malibu, and if you look among our diverse customers there, we have a lot of young people that are on social media. And when you have a great product, location, and setting, you get that generation wanting to show on, say, Instagram that they are at Nobu. The next generation down is really in that mind-set.

Mr. De Niro, of the upcoming Nobu hotel openings, is there any city you are most excited about?

RD: It’s hard to choose one. It’s like asking someone to choose their favorite child.

Are there any cities not currently in your portfolio you’d love to open a Nobu property in?

MT: New York is one, and we are also looking at Rio de Janeiro.

RD: Yeah, we had a great place [in NYC] there, but it fell through. I have a place in [Antigua and] Barbuda—wait, I have to show you a photo!

Wow, this looks incredible. Can’t wait for that one.

TH: Paris is another.

Chef Nobu, are you already working on the menu for the future hotels?

Nobu Matsuhisa: We already have the menu concept for the hotels; they are all basically the same, [except] each local chef creates specialty dishes. I never think about it [ahead of time]. I look at the local produce, visit a lot of restaurants, and see how they are managed. Then we discuss it and decide what to do.

How do you select the head chefs at each of the new Nobu restaurants?

NM: Head chefs are never hired from the beginning. Nobu has been around since 1994, almost 25 years, so a lot of chefs start working as line cooks [and] then grow [within the Nobu Group], just like in a family.

Mr. De Niro, what are your current favorite Nobu dishes?

RD: Black Cod or the Rock Shrimp. There are many dishes I don’t know, but I do tend to stick to the same things usually. However, Nobu’s food has withstood the test of time to continue to be creative, high-quality, and yet simple. I mean, when I’m with my wife, family, or friends, I always say order whatever you want; it’s all good.

Chef Nobu, do you ever try to surprise Mr. De Niro?

NM: Yeah, but Bob can’t eat anything! He doesn’t like shellfish.

RD: I’m allergic, actually. He’s trying to give me a funeral.

NM: One time, he says, “Okay, I’ll try [new dishes], but just a few.” So dishes come to the table, and he eats. Then another comes, then another, so finally he gives up.

RD: It’s a problem. Don’t know what to choose.

After nearly 25 years in business together, how would you describe Nobu’s continued appeal for your quintessential customer?

RD: What makes the hotels special is creating a destination restaurant of exceptional quality for locals and tastemakers to come dine [in] and then extend that great service and charismatic design into the night.