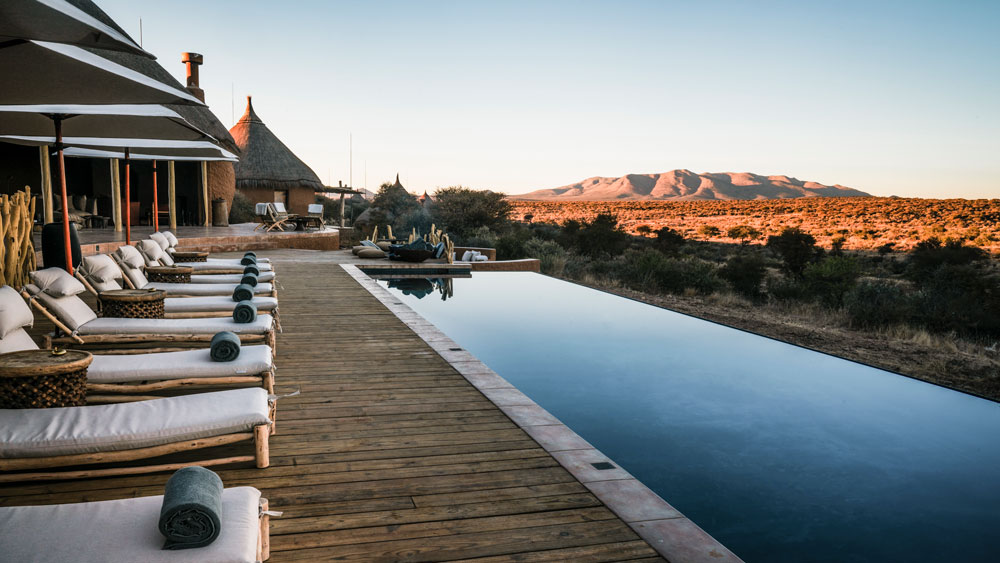 Some might say that when Angelina Jolie gives you advice, it’s probably best to heed it. And no one knows this quite like Arnaud Zannier, hospitality ace behind Zannier Hotels—a boutique collection of properties dotted across the globe and beloved by those-in-the-know for their barefoot approach to luxury. It was Jolie who sparked the vision for his latest project, Omaanda, which joins the ranks of a host of luxe new safari lodges popping up across Namibia.

The actress-turned-director-turned-philanthropist met the hotelier while staying at Phum Baitang, Zannier’s laid-back lodge near Siem Rap, Cambodia. The property was her home base while she worked on First They Killed My Father: A Daughter of Cambodia Remembers, a film based on a memoir of the same name that details the Khmer Rouge’s regime. During that five-month stay, she convinced Zannier to set down roots in Namibia—rightly spotting the destination as one of the continent’s biggest untapped safari markets. And now, with this month’s opening of the boutique lodge outside of the country’s capital of Windhoek and tented-camp Sonop nearing completion in the Namibian Desert, the seeds she planted are blossoming.

Oshiwambo for “rhinoceros,” the 10-room lodge draws its name from its location in the heart of the 22,000-acre game reserve managed by N/a’an ku sê, one of the country’s premier conservation organizations. Like the name, everything about the lodge flows organically from the sights, sounds, and culture of this wide, savannah-covered corner of Namibia. The camp’s hut-like buildings rise out of the dusty plains looking right at home thanks to their traditional Owambo architecture—think rounded, natural clay walls and hand-finished thatched roofs. Inside, longtime Zannier Hotel’s collaborator Géraldine Dohogne approached the decor with respect for the region’s ancestral architectural techniques in mind. The result chicly mixes Dohegne’s signature stripped-back approach to luxury (think muted colors with rustic, but never unrefined textures) with one-of-a-kind antique pieces sourced from Namibia and neighboring countries. Expect to spot curious baboons lounging on the cool polished concrete of your savannah-level covered deck by morning.

While out on game drives during the day you’ll look out for banded mongoose, Pangolins, and caracal alongside zebras, giraffes and hyenas. Though elephants and rhinoceroses do not roam freely through the concession, the center of the reserve is home to a sprawling, state-of-the-art hospital (funded by none-other than the Jolie-Pitt Foundation) for animals from those species that have been injured or abandoned. There, you’ll get an intimate look at the animals, and gain a deeper appreciation for those that champion the massive conservation efforts that have helped rehab the country’s wildlife, which has flourished under more serious protective programs were put in place in the mid-1990s.

Days out in the bush or lending a helping-hand at the hospital are best topped off with a dip in the property’s infinity-edge pool, which overlooks the reserve. You may just spot golden-maned lions lounging off the day’s heat or if you’re really lucky, Jolie herself, as the sun slips below the savannah’s vast horizon.