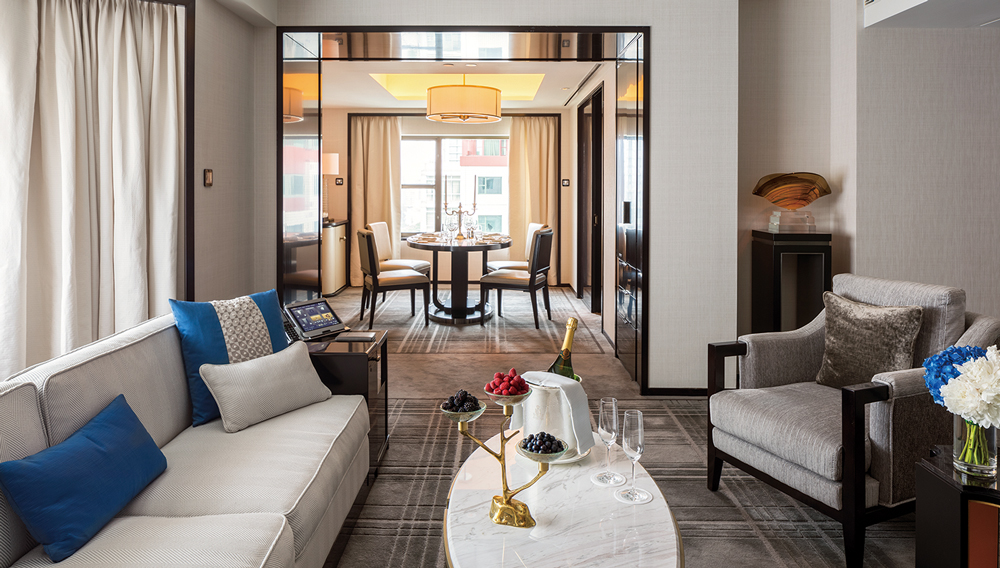 Beijing is a much different place than it was when the Palace Hotel opened in 1989. Since that pivotal year—marked most notably by the tragic events in Tiananmen Square—the Chinese capital’s booming population has been outstripped only by its furious pace of construction and consumption. The debut of the Western-style Palace was a harbinger of luxuries to come, but the hotel slipped in status when those luxuries (among them properties from Four Seasons, Rosewood, and Aman) eventually did come. After completing a $123 million transformation this May, however, the Peninsula Beijing—as the Palace has been known since 2006—officially reclaimed its place as the most refined refuge in the bustling city.

From imposing (above) to inviting (top), the lobby’s transformation reflects the drastic changes to the Peninsula Beijing.

It would be a disservice to call what the Peninsula has done a renovation; this is an entirely new hotel within the same shell. While the population around it has soared, the Peninsula has gone in the opposite direction—slashing its number of guest rooms from 525 to just 230. Private pieds-à-terre atop the sprawling city, the new rooms are a minimum of 645 square feet, most of them much larger. Each has a separate living area and bedroom and a sanctuary of a dressing room with a valet box and nail dryer. If they are a bit predictable in their design—straightforward international decor accented with Chinese art and motifs—all rooms offer suite-level space and luxury enhanced by the latest Peninsula amenities (including a touchpad room control that operates in 11 languages).

Chinese art plays a more prominent role in the Peninsula’s lobby, where a new three-story white-marble staircase is flanked by abstract ink paintings by Qin Feng and a pair of bronze sculptures by Zhang Du. The hotel also features revolving displays in a gallery space that links its spa and fitness center, and has launched an artist-in-residence program in conjunction with the Museum of Contemporary Art Beijing.

Guests can delve into Beijing’s art scene through the Peninsula’s Keys to the City program, which offers behind-the-scenes tours of local museums and the galleries of the 798 Art Zone. Also available are expert-guided trips to the Forbidden City and Tiananmen Square, both of which are within walking distance. The tourist-friendly location—also convenient to the walking-only Wangfujing shopping street—is one thing that hasn’t changed at the property, and it remains a primary reason why the Peninsula is our base of choice in Beijing ($260–$14,200).