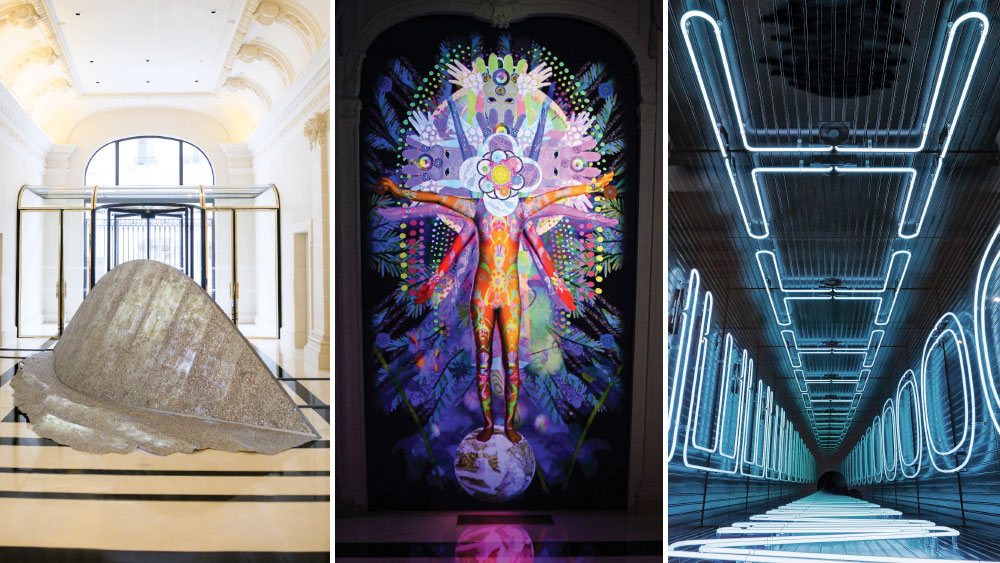 This past March, the Peninsula Hotels launched “Art in Resonance,” a multi-year program that celebrates emerging contemporary artists from all around the world. The brand aptly held its inaugural exhibition at their flagship property and timed it to coincide with Art Basel Hong Kong, of which the luxury group was an official partner. For its first event, the Peninsula and co-curators Isolde Brielmaier and Bettina Prentice tapped artists Janet Echelman, Iván Navarro, Timothy Paul, and architecture collective MINAX to create original pieces that would be dispersed throughout the hotel’s public spaces for all to appreciate for the months to come. Now—in the midst of Paris Fashion Week—the project has moved to the City of Light.

Elise Morin next to her art installation SOLI  Photo: Courtesy of Peninsula Hotels

The second edition of “Art in Resonance” was kicked off last Thursday with a presentation by sustainable accessories brand Brother Vellies. Following the show, the Peninsula Paris unveiled two newly commissioned pieces by Japan-born, New York–based Saya Woolfalk and local artist Elise Morin. The former’s installation, titled Visionary Reality Portal, is located in a salon just off the hotel’s entrance. Utilizing projection mapping, it “investigates an expanded definition of cultural diversity, [imagining] a post-racial utopia,” says Prentice. In the lobby, you’ll find Morin’s SOLI, an undulating sculpture covered in pulverized CDs that comments on the material burden that man-made objects have on the environment. And just steps away from Morin’s work is that of Navarro’s, which has traveled all the way from Hong Kong to the French capital for its second appearance. The Chilean artist’s neon installation HOME uses light and space to transform the word into an optical illusion, drawing in viewers for both a sensory and psychological experience.

Visitors and locals alike will have the chance to see these extraordinary pieces until November 15. During this time, guests also have the opportunity to indulge in culinary delights that match the visual prowess of Woolfalk, Morin, and Navarro with a special art-inspired, three-course menu served at the property’s Le Lobby restaurant.

After Paris, the program will make its return to Hong Kong in March with a new collection of installations to once again commemorate Art Basel. It’ll then be quickly followed up with a stop at the Peninsula Tokyo in April, ahead of the highly anticipated 2020 Summer Olympics, where local talent will play an even more significant role than in past showings.