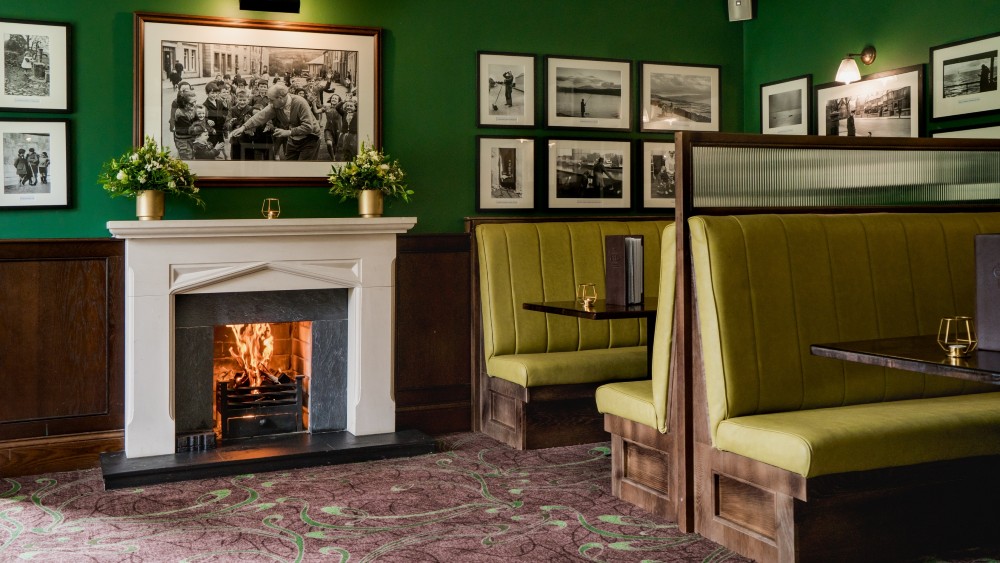 In 1912, Irish Jesuit priest Francis Browne received a gift from his uncle: a ticket to sail on the maiden voyage of the brand-new RMS Titanic liner as it made its way from Southampton, England to Queenstown, Ireland. A skilled photographer, Father Browne spent his first days on board taking pictures of all aspects of the ship, from the grand spaces and cabins to the staff and his fellow passengers. Before the Titanic set sail across the Atlantic Ocean, however, Browne received a telegraph from his Church superiors ordering him to “get off that ship”—a message that ended up saving his life.

It also garnered him global fame and launched his career as a photographer, since, once the ship when down, Browne’s final photos of the Titanic were published on front pages around the world. Now, over 200 of his original photographs—many of which have never been seen before—form the décor of the Father Browne Bar, opened this September at Lough Eske Castle, a former private estate-turned-upscale boutique hotel. The retreat is located in Donegal, one of the northernmost counties in the Republic of Ireland and home to an array of historic and natural attractions, including the majestic Slieve League Cliffs.

While post-Titanic, Browne went on to become known as one of the most important Irish photographers of the early 20th-century, documenting everything from the rigors of daily country life to the European trenches of World War I, he didn’t have the means to pay for the high cost of developing all of his film. So when the current owner of Lough Eske Castle (who also owns the Titanic Hotel Belfast) purchased a set of Browne’s old trunks at auction a few years back, he found inside numerous rolls of undeveloped film—which, now processed and remastered, form the basis for the largest private collection of Father Browne images.

Some of the original photographs at the Father Browne Bar  Photo: Courtesy of Lough Eske Castle

In addition to the stunning photos, guests of the bar will find a warm atmosphere of soft leather seating, cozy nooks, and stone floors in which to enjoy classic dishes like fish and chips, beef stew, vegetable curries, and homemade scones. Pair them with something from the extensive list of wines, local beers, signature cocktails, and—of course—Irish whiskeys.