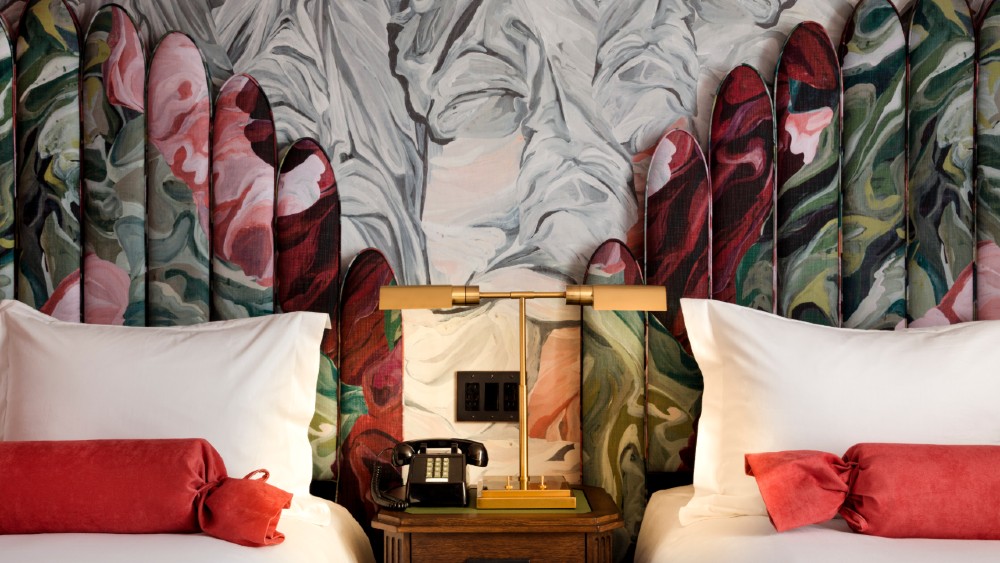 It’s telling that the Lore Group, the hospitality company behind such buzzed-about hotels as the Pulitzer Amsterdam and Sea Containers London, chose Washington, DC, for its first US property, the Riggs Washington DC. Over the past decade, the capital has slowly expanded from the more traditional luxury properties like the Hay-Adams and the Mayflower to add more chic, design-forward hotels to its roster, and Riggs Washington DC—which opened in February—is the latest to ride that contemporary wave.

“DC is an incredible city that has evolved dramatically in the past 10 to 15 years, especially in its restaurant and bar scenes,” says Billy Skelli-Cohen, CEO of Lore Group. “We haven’t seen that (level of) growth yet on the hotel side as we have in other American cities, so—from a business perspective—we saw that as a great opportunity to create something different.”

Located in DC’s Penn Quarter neighborhood, Riggs is set inside an 1891 building that once housed the “Bank of Presidents,” which earned that nickname due to the 23 POTUSes who banked there in the early 20th century. “We were drawn to the history of the building’s origins as Riggs National Bank, an iconic structure that’s one of the last Romanesque Revival-style buildings in the city,” says Lore Group Creative Director Jacu Strauss. “The original architectural features like the Corinthian columns and 22-foot coffered ceilings in Café Riggs, and the original metal, concrete and tile leftover from the bank’s vault inspired us quite a bit to honor the legacy of the building.”

Along with celebrating those original flourishes, Strauss and team have adored the 181 rooms with things like a custom headboard and background wallpaper by NYC-based design studio Voutsa, which created the design by analyzing a 17th-century Mexican painting and drawing out specific color swirls. In the corner of each room stands a custom-made steel safe that houses the minibar and an actual safe, while velvet-clad furniture in jewel tones and pastels compliment the navy and marble bathrooms. Other style-savvy amenities include silk patterned robes and umbrellas with floral undersides that match the headboard (yours to take home for $90 and $40, respectively.)

Fifteen suites are available, including the upcoming top Riggs Suite, complete with a fireplace, dining room, bar, and living space. Also notable are the four First Lady suites inspired by a select few Presidential better halves. “The world’s most famous house itself, the White House, is just down the road from the hotel, and  I was introduced to the White House Historical Association and have been lucky to have had several tours of the property to learn about its history from an interior design perspective, and about the role each First Lady played in that,” says Strauss. “Most hotels have a Presidential Suite, but we thought we would honor the other halves that played an equally pivotal role in their spouse’s presidency.”

For example, the Louisa Adams Suite celebrates her love of music—she is credited with encouraging music during gatherings at The White House—and features a baby grand piano, violin wall art, music-themed books and a speaker shaped like a gramophone that can hold in iPhone. Meanwhile, the Ida McKinley Suite highlights Mrs. McKinley’s love of flowers and plants, and her introduction of them throughout the White House, with a color palette of various hues of pink (in this room, even the safe is pink), purple, green and yellow.

Angelica Van Buren’s Suite reflects her opulence (she was known for throwing extravagant parties) with rich gold and red accents, and the Caroline Harrison Suite honors her role in starting the White House porcelain collection with an assortment of decorative Wedgewood Jasperware and other porcelain items collected from antique markets. (Strauss especially enjoyed scouring flea markets for the décor, and at one local spot found cloth napkins embroidered with the Riggs family name. They’re now framed in one of the private dining rooms.)

On the dining front, Café Riggs—located across the hall from the bank-inspired check-in desk—serves a brasserie-inspired all-day menu on which classics like Vache cheese omelets, croque monsieurs, steak frites and a raw bar share space with an extensive vegetable-focused section of dishes like fried baby artichokes, broccoli salad, and sunchokes with freekeh. A few surprises, like a $98 caviar grilled cheese made with crustless brioche, Vache cheese, and Russian osetra caviar, pop out as well. The setting of the restaurant is no less impressive, with its Corinthian columns, Art Deco chandeliers, and a massive floral sculpture by local paper flower maker Mio Gallery.

Another highlight is the cocktail bar hidden in the original basement bank vault. Developed by London-based cocktail innovator Ryan Chetiyawardana (aka “Mr Lyan”)—whose Dandelyan earned the top spot on the 2018’s World’s 50 Best Bars list—the place pairs inventive ingredients with traditional techniques (although one drink uses a microwave to marry flavors, so maybe not all that traditional.) Try the Japanese Saddle, a Sakura sour cocktail which pays homage to Japan’s gift of cherry blossoms, or the play on a Sazerac, which involves an absinthe chapstick being smeared inside the glass before the cocktail is poured in. The building also sports a rooftop space that will host a warm-weather pop-up. Room rates start at $329.