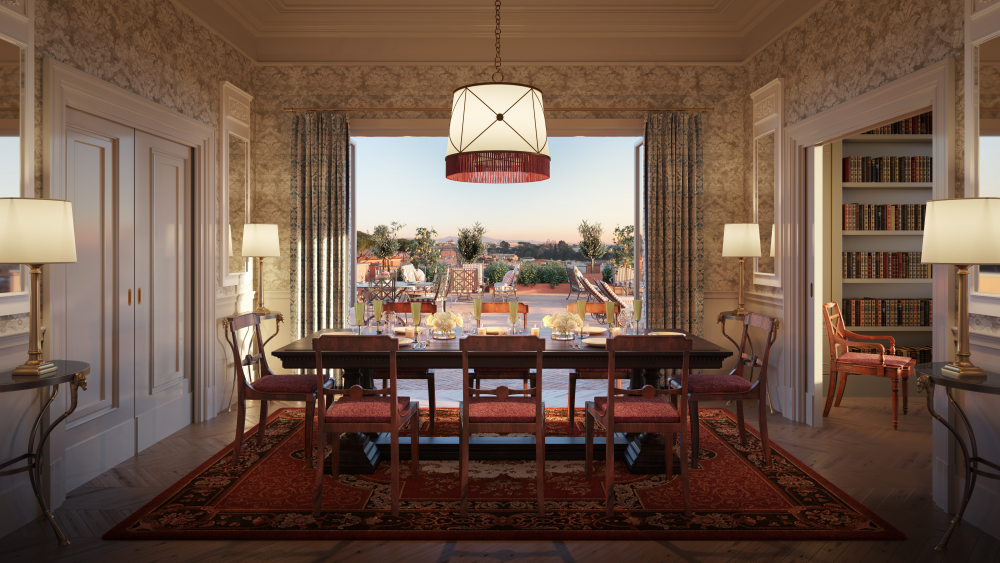 Renders by The Boundary for Rocco Forte Hotels.

Rome may never be an under-the-radar travel destination, but the Eternal City never seems to run out of treasures to discover. These days, that maxim is no less true of the city’s hotel scene, where the freshly opened Hotel de la Ville is among a number of new luxury properties promising a fresh perspective on the city.

Hotel de la Ville, which opened this month, takes that mission quite literally. Following in the footsteps of the recently opened Pantheon Hotel and Hotel Vilòn, the de la VIlle sets itself apart with a picturesque location that few properties can match. Perched at the top of the Spanish Steps, not only is it central, but the vantage point also offers gobsmacking vistas of the Vatican and beyond.

The accommodations are nothing to sneeze at, either. One hundred and four rooms and suites are available for check-in, each designed by Olga Polizzi and Tomasso Ziffer, the brains behind some of Rome’s most lustrous hotels. The duo was inspired by the 18th-century German and English nobles who would collect art in their travels—a bygone form of art tourism known as the “Grand Tour”—when designing the interiors. Flooring is traditionally wooden, bathrooms are suitably marble and a sense of historic, old-world charm pervades each suite.

Of course, if you really want to live like a Caesar, you’ll want to consider the Suite de la Ville. Taking the hotel’s artsy theme and running with it, the eponymous digs boast a private art collection and a select blend of contemporary and antique furniture. Two panoramic terraces and a private elevator top off the alleged “crown jewel” of Hotel de la Ville, which consumes the entirety of the eighth floor. And should the space alone not prove enough for you, portions of the seventh floor can be booked out for a duplex effect. Exclusive limo service, a members-only visit to a historic Aventine Hill home and a personal massage service rounds out the suite’s abundant amenity package. You can even request that an elliptical be placed in the room, so you can get your endorphin fix in peace—and amidst a pretty gorgeous backdrop.

The rest of the hotel, awash in 18th-century flair, doesn’t disappoint. Handmade wallpaper from local designers and rich Italian fabrics and tapestries zest up the walls. Those touches envelop guests throughout the property, from the hallways to Mosaico, the hotel’s main restaurant, which serves up haute, Mediterranean-inspired cuisine and views of the central courtyard. And it doesn’t end there: Inspired by the simple, geometric lines found in 17th-century horticulture, the hotel garden is the perfect hideaway after a long day spent walking the Tiber’s crowded shores.

No, you may not be able to re-invent the Roman holiday, but Hotel de la Ville might be able to accomplish something even more satisfying—allow Rome to do what it does best: show off.

Check out more photos of Hotel de la Ville, below:

One of the Suite de la Ville’s panoramic terraces.  Renders by The Boundary for Rocco Forte Hotels.