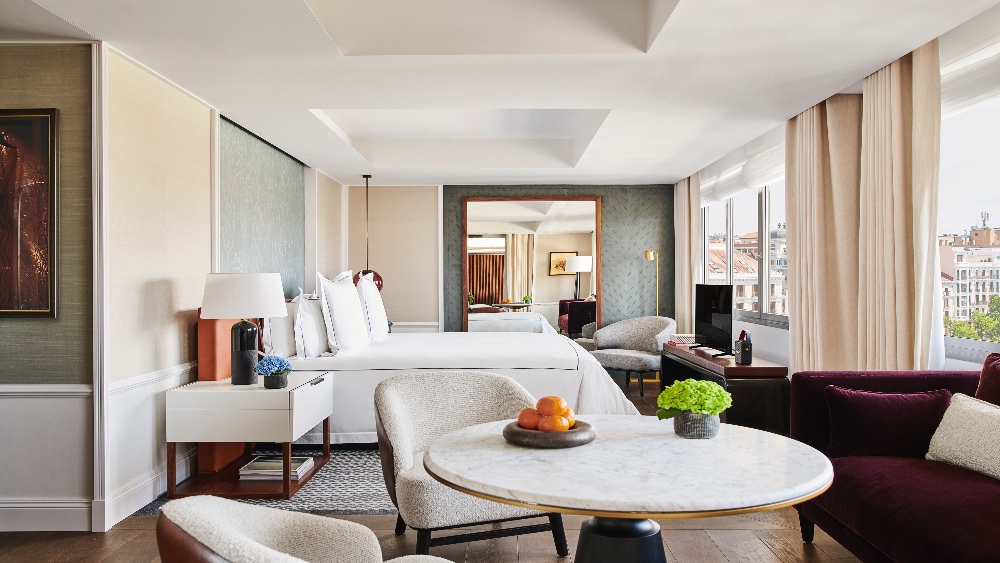 Rosewood Hotels is offering guests a chance to see the city of Madrid from high up. Earlier this summer, the company’s Villa Magna property unveiled its newly revamped penthouse suites for its VIP guests.

The suites—called the Anglada House and Salamanca House—offer some of the largest outdoor terraces you will find with views of Madrid that can also be used as private event spaces. Both suites are a part of the property’s new “signature houses” designed by Australian interior design company BAR Studio.

The Salamanca House, named after the historic district where the hotel is located, has a contemporary design with an artwork collection intended to pay homage to local culture. The one-bedroom suite can be extended with adjoining rooms for larger groups. The accommodations include two fireplaces, a kitchen area and several living areas.

The New Salamanca and Anglada House sit on the top floor of the Madrid property.  Rosewood Hotels

The Anglada House, named after Spanish politician Juan Anglada, is the larger of the two, and accommodates up to six guests. The two-bedroom suite features floor-to-ceiling windows that bring in plenty of natural light and even has its own office. The interior area includes a dining room, living room, island kitchen and a remote-controlled fireplace. Its art collection was curated by British studio Art Link to include works that pay tribute to both Anglada’s history and the city’s local culture. Outdoors, the garden terrace has a separate living area with a dining room for up to eight people.

In addition to the new penthouses, the property has two residence-style houses—Castellana and Cedros House—on the lower floors. The two-bedroom Castellana House located on the second floor overlooking its namesake neighborhood and can accommodate up to five guests. Cedros House is located on the sixth floor and has a garden that surrounds guests with lush greenery. The one-bedroom house fits up to three people with a service kitchen, living and dining room.