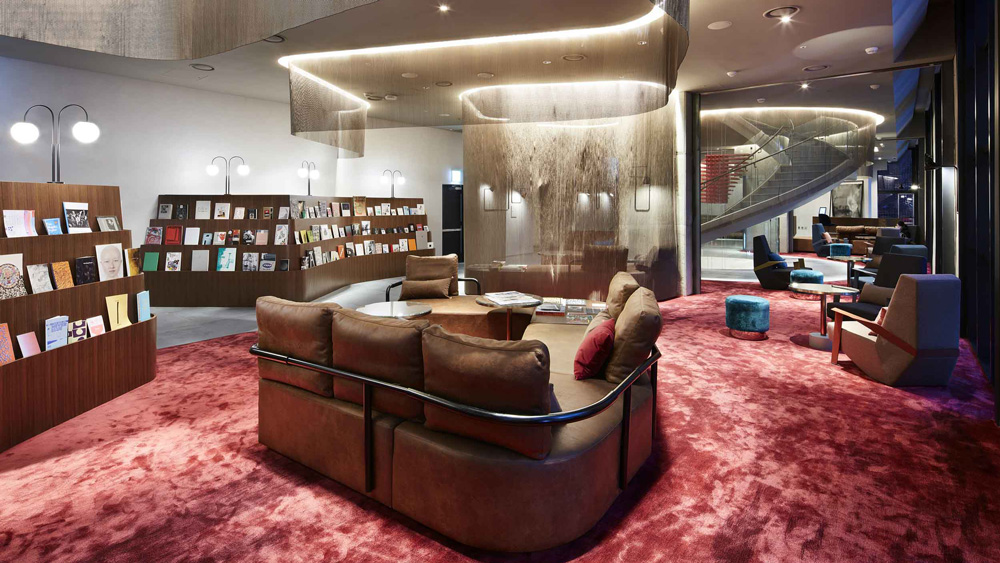 The Hongdae enclave in the western precincts of Seoul is anchored by Hongik University, one of the most well-regarded fine-arts colleges in South Korea. In recent years, the district has become a magnet for a vibrant youth culture centered around music (particularly of the indie variety), arts festivals, and street fairs, making it a hot spot for visitors looking to go beyond the bright lights and shopping of Gangnam. And now, new hotel Ryse by London-based Michaelis Boyd (with architecture by Steven Song) fits the area’s cultural zeitgeist like a glove.

“The neighborhood encourages self-expression and individuality,” says the firm’s principle, Tim Boyd, explaining that these are “characteristics we wanted to integrate into the design. Hotels are no longer just for visitors but need to appeal to locals, too, and offer amenities that feel part of the neighborhood.”

To bring the outside in, the team looked to the dramatic mountains that surround the city, which inspired a concrete column at the center of the space that houses the elevators. “The structure resembles a huge piece of stone, and its roughness contrasts with the perfectly cut and polished marble lobby area,” explains Boyd. “We then offset the raw textures of the concrete with comfortable and luxurious features, such as the pink resin floor—[which is almost] a reflecting pool for the coarse material that surrounds it—and the marble within the lift lobby. [It] feels as if the concrete has been cut into to reveal beautiful marble beneath.”

From there, Boyd and his team employed various elements to draw on the bohemian vibe of the neighborhood. Artworks reflecting the history of the area accent the check-in and third-floor Print Lounge, while “the design for the Side Note Club was influenced by Hongdae’s music scene, housing its own vinyl collection,” Boyd says. “This is not just a bar but an integral part of the neighborhood . . . You are as likely to find local people hanging out here as hotel guests.” The 272 rooms and suites are divided among 20 floors in six equally creatively minded categories, proceeding from smallest to most luxurious: Creator, Director, and Editor rooms, and Producer, Artist, and Executive Producer suites. The latter is the sprawling top-floor penthouse, a 2,000-square-foot space designed to look more like an in-the-know art collector’s apartment than a classic hotel room.

Just a 10-minute walk from Hongik University and situated in the midst of the pulsing arts scene, the hotel lets guests immerse themselves in the creative undercurrent that runs through Seoul—discovering new galleries, trendy restaurants, and curated boutiques alongside the locals. “You are visiting a lively and constantly changing design-led environment,” says Boyd, “and the hotel in all senses really taps into this . . . Our intention was to create a neighborhood social hub that is part of Hongdae.”