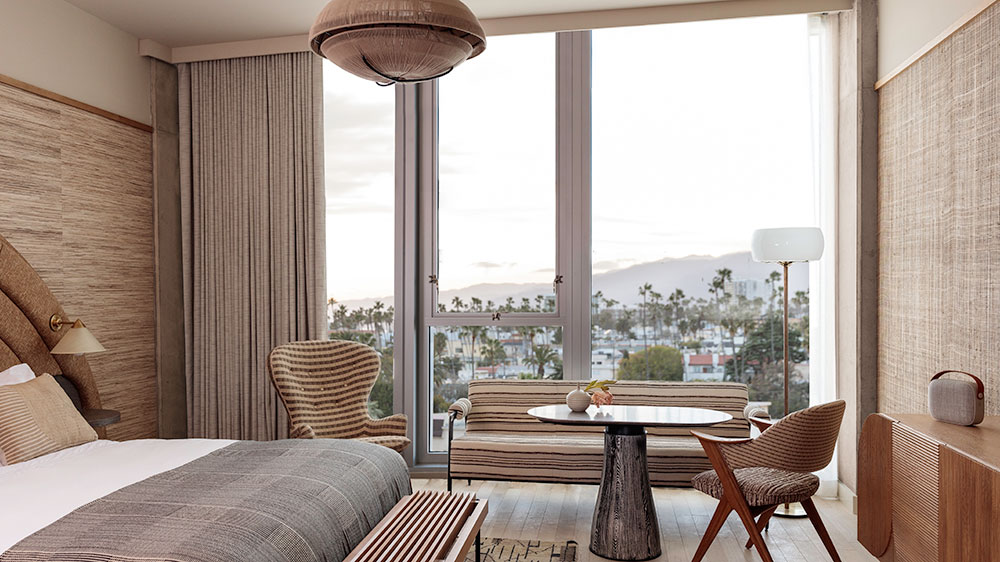 While Downtown Los Angeles has been undergoing a renaissance and West Hollywood is seeing its own influx of luxurious digs, Santa Monica is also getting some love, too. Just last week the oceanside city welcomed Santa Monica Proper Hotel, the brand’s second property following its debut in San Francisco.

Occupying a Spanish Colonial Revival–style building by architect Arthur E. Harvey dating back to 1928, new architectural elements have been added and the interiors have been given a new lease on life thanks to Kelly Wearstler. The 271-key hotel features stylish accommodations with an earthy color palette, mid-century modern furniture, woven textiles, stone details, and floor-to-ceiling windows. Many of the rooms also come outfitted with balconies so that you can fully appreciate the picturesque beach town and feel the ocean breeze.

The property will also boast some amazing facilities, including Santa Monica’s first rooftop pool complete with cabanas, a bar, and an indoor-outdoor bistro serving Mediterranean- and Californian-inspired cuisine called Calabra, making it the ultimate hangout for alfresco sunset drinks and bites in the city. But its most highly anticipated venue is Onda. Opening in August, the restaurant will be a unique collaboration between celebrated chefs Jessica Koslow of Los Angeles favorite Sqirl and Gabriela Cámara of Mexico City’s Contramar and San Francisco’s Cala with a focus on local ingredients, sustainable seafood, and Latin flavors.

Also on the horizon is the 3,000-square-foot Surya Spa by acclaimed Ayurvedic doctor Martha Soffer and her husband, Roger. Arriving in November, this oasis will have individually curated offerings that support physical, mental, and spiritual well-being through therapeutic massages, steam and oil treatments, meditation classes, and three- to 21-day Panchakarma programs. Until then, get your workout in at the state-of-the-art fitness center, practice some yoga on the dedicated terrace, or grab a bicycle from the front desk and explore the area.