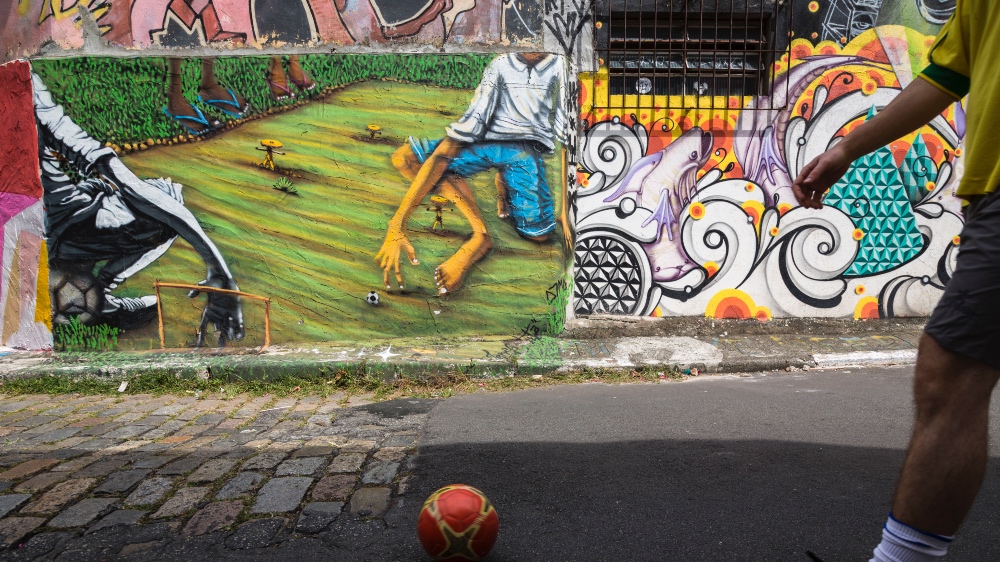 São Paulo—or Sampa, as it’s known by locals—is the cultural heartbeat of Brazil. Artists have long converged here to express themselves freely, and their works have become a vital part of the city’s fabric. Massive technicolor murals appear everywhere as you drive through the streets, all of them imbued with Sampa’s rich history. Now, a hospitality heavyweight has decided to incorporate the city’s vibrancy into a luxurious new hotel.

Opened in May, the JW Marriott Hotel São Paulo is located in the Chácara Santo Antônio neighborhood nears the exclusive Jardins enclave. Set within striking distance of the high-end boutiques and posh cafés of Oscar Freire Street, the gleaming tower serves as a sumptuous base for travelers eager to discover the city’s colorful art scene.

You’ll be immersed in creativity from the moment you check in. The walls are dotted with curated works by Brazilian artists like Ramon Martin and Regina de Barros. Local motifs have also been thoughtfully woven throughout. The lines in the rug, for instance, evoke the Pinheiros River that runs through the city. To top it off, the lobby’s sinuous black marble bar and sculptural crimson staircase act as interactive installations and invite you to explore.

There are 258 rooms and suites in total. The crown jewel is, of course, the Presidential Suite, which runs across 23,000 square feet on the 14th floor. Inside, you can expect stylish Art Deco decor and more locally made ceramics and paintings.

The hotel’s tranquil spa and inviting indoor-outdoor pool will beckon you to linger, but be sure to set aside time to explore every inch of the buzzing metropolis. It’s a 20-minute ride—give or take a few, depending on the notoriously heavy traffic—from the JW Marriott to the Museu de Arte Contemporânea da Universidade de São Paulo. It’s one of the many notable museums bordering Ibirapuera Park.

From the park, it’s a short trip to the Liberdade district and Japantown. (For the unversed, São Paulo has the largest population of Japanese descendants outside of the country.) Here, you can graze on some of the city’s best Japanese fare while taking in those famous murals.

Another highlight is Vila Madalena. While many artists have called the upscale bohemian enclave home since the 1980s, it’s only been within the last decade that visitors from outside of Sampa came to see the graffiti for themselves.

“Ten years ago, artists came here but no one visited,” recalls Galeria Alma Da Rua’s manager Lara Pep, who showcases works by Brazilian creatives like celeb-approved graffiti artist Sapiens (Michael B. Jordan owns one of his works). “When we were founded seven years ago, people from other countries and states in Brazil started coming, and famous artists started coming here to paint.”

Pep says artists gathered in Vila in the early days because it was one of the more affordable places, but the creativity quickly spread throughout the city.

Indeed, São Paulo is considered a graffiti mecca alongside New York City and Berlin. This is perhaps best illustrated with a walk down the city’s famous Batman Alley. The multihued alley was named after the Batman motifs that appeared early on, though today the graffiti covers all kinds of subject matter. In fact, the murals change weekly to ensure a different experience with every return. On the weekends, the area transforms into a bustling open-air market with artisans peddling local wares. In addition, serious art collectors can head to Kobbinielsen Photography, Ziv Gallery and the like to pick up some unique pieces to take home.

After a whirlwind tour of all that São Paulo’s creative scene has to offer, truffle pasta at JW Marriott’s Neto and a Caipirinha at lobby bar Caju await. It’s the perfect end to an art-filled day.

Rates for rooms start at $360 per night; the Presidential suite starts at $5,000 per night.