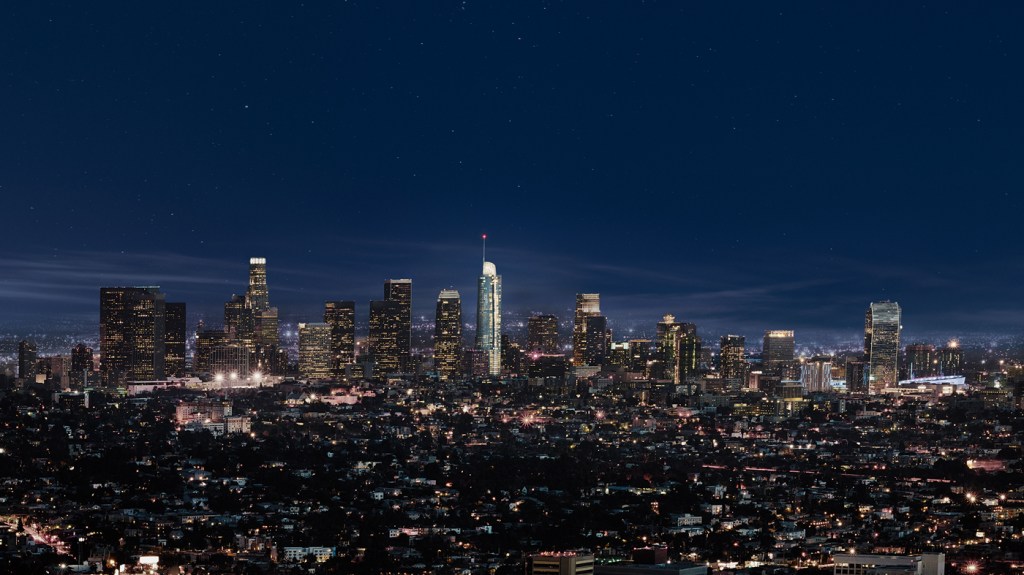 Los Angeles’s long-anticipated Wilshire Grand Center skyscraper opened to the public this week, forever elevating the skyline as the tallest building on the West Coast. In a striking departure from the city’s traditionally flat-roofed buildings, the 1,100-foot tower is capped by a glass crown that was modeled after California’s iconic Half Dome rock formation in Yosemite. Additional West Coast-inspired design elements are evident throughout the 73-story structure’s office spaces and meeting rooms, as well as in the InterContinental Los Angeles Downtown, which is comprised of 889 rooms and suites that occupy the 31st to the 68th floors of the tower.

The hotel’s design details were inspired by architectural historian Reyner Banham’s book, Los Angeles: The Architecture of Four Ecologies, which examines how the beach, freeways, foothills, and flatlands make up the city’s cultural landscape. AC Martin Architectural Design Group expanded on the concept when designing the spaces, creating colorful light fixtures as a playful homage to the city’s traffic-laden freeways and placing billboard-like headboards in the guest rooms. Floor-to-ceiling windows provide panoramic views of the sparkling city below, while flat-panel televisions and in-room systems ensure guests can enjoy state-of-the-art entertainment without leaving their rooms.

Open to both hotel guests and the public, the hotel’s restaurants and bars allow locals and visitors alike to play in the clouds. La Boucherie on 71 is a sky-high, French-inspired steakhouse and seafood restaurant. Private dining booths were created to accommodate VIP clients, while a cheese and charcuterie cave complements the restaurant’s extensive wine list. The 69th floor houses Sora, a sushi restaurant with an array of Japanese whiskeys, as well as Dekkadance, a farm-to-fork culinary joint complete with live cooking and carving stations and a chocolate fountain.

Housed on the property’s 73rd floor, Spire 73—the tallest open-air bar in the Western Hemisphere—allows guests to spot stars while sipping cocktails. Equipped with elongated fire pits, water features, and plush seats, the lounge offers stunning views of the city from all angles. The 70th-floor Lobby Lounge provides an upscale vodka bar experience, complete with burgers, sandwiches, and appetizers. On the 7th floor, an outdoor pool is flanked by cabanas and a hip bar. The hotel also offers nearly 95,000 square feet of event and conference space, including a grand ballroom and 33 meeting rooms. Nightly rates start at $379, allowing guests to see Los Angeles in a whole new way.