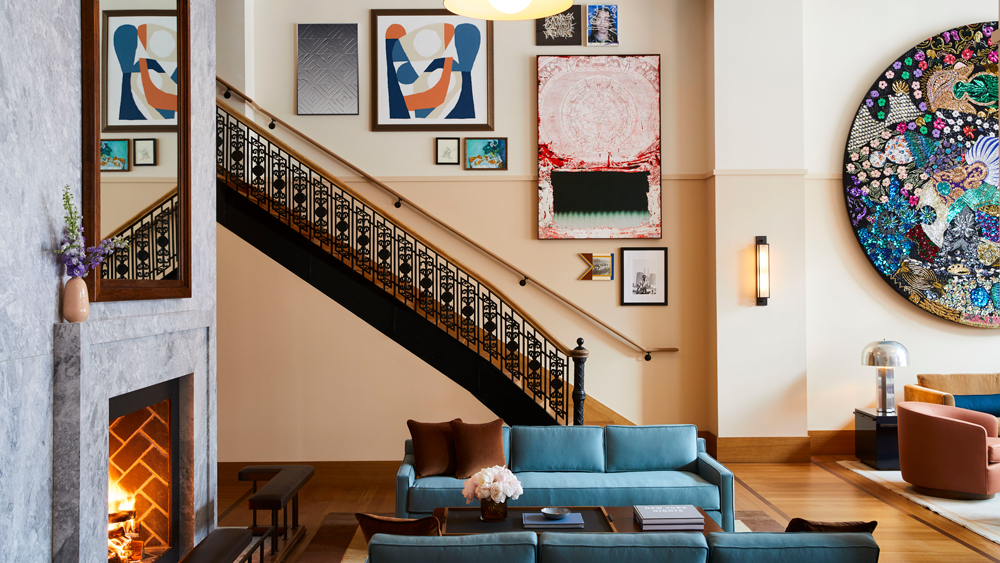 Detroit is on the up-and-up. While it’s no longer the thriving Motor City of the early 20th century, it’s not the abandoned downtown of a few decades ago either. The city is finally figuring out how to embrace its history and come into its own as a somewhat surprising art-and-design hub. This is due in no small part to a company, called Shinola, that bought the rights to the name of a defunct shoe-polish company and started manufacturing luxury watches, leather goods, and bicycles in Detroit in 2011.

Since then, the Shinola brand has worked hard to cement itself as one of the best-designed product lines made in the United States. With its reputation firmly established, Shinola apparently sensed it was the right time to enter the hotel market—a move also made by other design brands, like West Elm and Restoration Hardware (although Shinola’s opening has beaten them both to the punch). And, of course, the hotel had to be in Shinola’s hometown of Detroit.

“We felt that a hotel was the perfect opportunity for guests to fully immerse themselves in the Shinola brand,” explains Daniel Caudill, creative director at Shinola.

And that immersion is exactly what the brand has achieved with the Shinola Hotel, which opened its doors earlier this week. The hotel took over several historic structures downtown, including an old Singer Sewing Machine Company building and what used to be a department store covered in gorgeous terra-cotta tilework. To pull off the transformation, the brand collaborated with the Detroit real estate firm Bedrock (which is owned by local businessman Dan Gilbert), enlisted Detroit’s Kraemer Design Group as architect and historic consultant, and tapped New York’s Gachot Studios—whose portfolio includes Manhattan’s Smyth Tribeca Hotel, as well as Shinola’s flagship stores in New York and Los Angeles—as interior designer.

The attention to style and detail that Shinola is known for is apparent across the hotel. For example, after meticulously restoring the terra-cotta tiles on the outside of the department store building, the team created a mold from the tiles that was used to create the ceiling of the soaring events space. Furniture, wall coverings, and accessories that fill the airy spaces were custom-designed and manufactured primarily in the United States; many were produced in Michigan by partners including Pewabic (known for its ceramics), Booms Stone Company (responsible for the elegant stone finishes in the guest rooms), and Great Lakes Stainless (its decorative metals are found throughout the hotel’s public spaces).

The lobby features a roaring fireplace and plush leather seating, making it a surefire hot spot for Detroiters looking to get out of the cold. A grand staircase with the building’s original iron handrail leads to a cozy guests-only mezzanine lounge stocked with books and games. The Detroit-based gallery Library Street Collective curated the art for the hotel, and the reception area showcases a stunning custom-woven, four-wall, floor-to-ceiling piece by the Detroit artist Margo Wolowiec.

Further upstairs, the hotel’s 129 rooms and suites highlight materials like oil-rubbed bronze, soft leather, plush mohair, and American white oak, along with hardwood floors and massive arched windows that offer up expansive views of the city (request a room on one of the upper eight floors to take full advantage). In the bathrooms, Waterworks partnered with Shinola on custom fixtures that are inspired by the caseback details of Shinola’s watches. And, of course, Shinola’s products are prominently featured—including an exclusive line of toiletries, called Rayl’s, that the brand created as a nod to one of the building’s previous tenants.

Check into one of the hotel’s suite-level rooms (there are 10 different room types scattered throughout), and you’ll find a Shinola Runwell turntable and a curated collection of vinyl, deep marble soaking tubs, balconies, and gas fireplaces. The two penthouses offer even more perks, featuring separate dining and living areas, large terraces, and fireplaces.

When it comes to wining and dining, Shinola plays into Detroit’s blossoming restaurant scene (which is led by stunners like the slick Apparatus Room) with a host of options by New York’s NoHo Hospitality Group and chef Andrew Carmellini. On the casual end, there’s a yet-to-open beer garden called the Brakeman and a chicken-and-biscuits joint, and on the more buttoned-up side of things, guests can settle in at the Evening Bar and an upscale Italian restaurant called San Morello. There are also several outdoor areas, including a showstopping rooftop conservatory.

Rounding out the atmosphere is Parker’s Alley, a pedestrian shopping arcade nestled into what used to be an alleyway behind the property. It’s the first of its kind for Detroit—the Motor City is not known for its walkability, after all—and is stocked with local female-owned retailers like Drought Juice and Made Floral, as well as a new Shinola retail store.

Shinola is the third hotel to open in a budding trifecta that’s creating a new luxury-hotel district for downtown—one that’s capitalizing on the neighborhood’s formerly abandoned-but-still-glorious historic buildings. Shinola joins the 1920s-throwback boutique hotel the Siren and the beautiful Detroit Foundation Hotel, both of which opened in the last two years with standout restaurants and swanky rooms.

You know what they say: Three’s a trend, and Detroit’s luxury quotient is definitely on the rise.