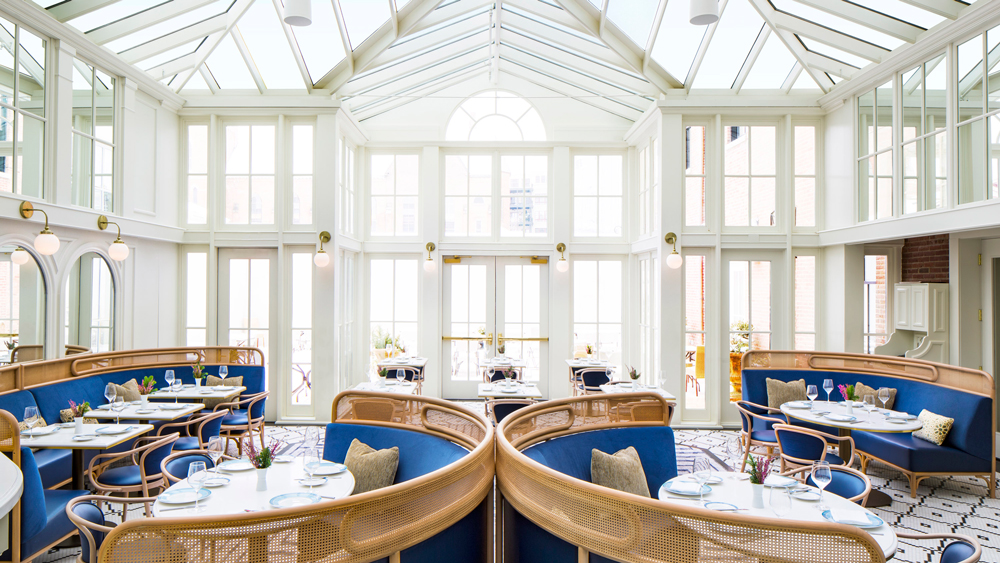 The Adelphi Hotel was Saratoga Springs’ swinging place to stay for much of the 19th and 20th centuries. Beloved by well-to-do socialites and politicians, the hotel was a mainstay for an exclusive coterie of Manhattanites drawn to the quaint city for its natural hot springs and horseracing track.

Now, 140 years after first opening its doors in 1877, the Adelphi is once again a stately retreat. Opened in October 2017 after a five-year renovation (not to mention years of neglect that left the 19th-century hot spot in ruin), the new hotel is a perfect balance of past and present.

Architect Dominick Ranieri and designer Glen Coben were tapped to preserve the historic character of the original 19th-century building’s Victorian past while reimagining it into a 21st-century luxury hotel. The preservation of the exterior of the hotel—with its iconic brick facade, elaborate masonry, and signature columns rising from its elevated piazza—was a vital part of keeping the original charm of this updated boutique hotel. Inside, guests will find plush custom-designed carpets, specially-made damask wallcovering inspired by classic Victorian patterns, and original furniture pieces that were lavishly reupholstered. In the lobby, the Adelphia’s original grand staircase has been faithfully restored. The hotel’s original 74 accommodations, meanwhile, have been combined to create just 32 luxurious and oversize rooms and suites.

The new Adelphi is truly a culinary-focused hotel, boasting three different dining options, with celebrity chef David Burke helming the menus as culinary director. Diners can opt for the decadent Modern American Steakhouse at Salt & Char or seasonal plates at the Blue Hen, which features a 1,200-square-foot glass-walled conservatory. For a true taste of old Saratoga Springs, however, the scene at Morrissey’s is unmatched. Serving small plates and craft cocktails, the lounge is a legendary local watering hole, named for John Morrissey, the founding father of the city’s venerable racetrack.