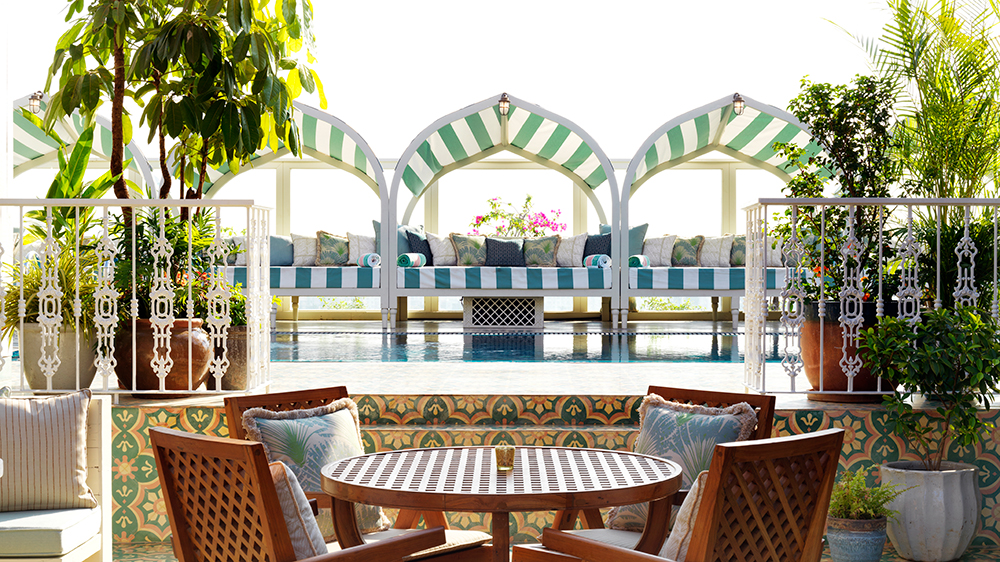 Soho House continues its worldwide expansion, opening in Barcelona one day, then Amsterdam the next. There are nine in the UK alone. And is there really one in Brooklyn? The latest from the global member’s club, however, is something altogether different: The Soho House Mumbai, which recently opened as the brand’s first Asian outpost, is a little bit of Miami, a little bit of London, and a whole lot of Bollywood glitz. So much so that it has us wondering: What took SH founder Nick Jones so long to head East?

Soho House’s obsession with discretion works well in a place like Mumbai. From its lofty nest high above Juhu Beach, it’s a magnet for India’s who’s who: Bollywood heavyweights converge to finalize mega-blockbusters, fashion designers scope out new muses, DJs flirt with sunbathing vacationers, and art directors close major deals—far from the billion pairs of prying eyes that call this chaotic city home.

While first-time tourists tend to congregate amid the heritage architecture of Colaba in South Mumbai, the British brand, for its 23rd outpost, instead splashed out for some prime oceanfront real estate at the epicenter of the city’s creative culture, in the suburbs of Juhu and Bandra to the north. The relentless honking of auto rickshaws becomes a distant memory as you breach the threshold of the gleaming white tower and become engulfed in the cozy embrace of the lobby, where the Allis café and Cecconi’s Arabian Sea–facing restaurant are open to the public.

Once you cross over the members- and guests-only lair, you’ll have to be careful not to trip over the latest Bollywood “it girl” en route to the plush 32-seat cinema or the eighth-floor dining room decked out in glittering chandeliers, throw pillows in colorful Kashmiri embroidery, and installations ranging from whimsical pop art takes on bags of rice to Subodh Gupta’s signature sculptures fused from traditional steel dishware.

The seamless East-meets-West approach continues in each of the 38 rooms, where woven-cane chairs and sconces, artfully weathered pastel flooring from beloved Indian brand Bharat Tiles, and lampshades dressed in ikat fabrics mix with quirky patterned wallpaper, glinting white subway tiles, and an apothecary’s worth of bath products from Soho House’s own cult beauty brand Cowshed.

But while there’s a visual treat around every corner, the star attraction is the rooftop terrace. Mint-and-white-striped cabanas with a modern spin on quintessential Indian arches surround a pool on one end; a marble bar bordered by rope-backed chairs presides over the other. In-between, bamboo lampshades sway lazily in the breeze, ceiling fans whir overhead, and leafy plants cascade over pastel banquettes, giving the space the feel of a colonial Indian veranda updated with a 21st-century slant.

Whether it’s packed on a Sunday afternoon as the city’s glam set lets loose with nary a stray camera flash to worry about—aided by a vigilant staff—or on a laid-back weekday morning, with just a handful of tables taken over by laptops and endless cups of coffee, this is already the most coveted perch in Mumbai—for those who can get in.