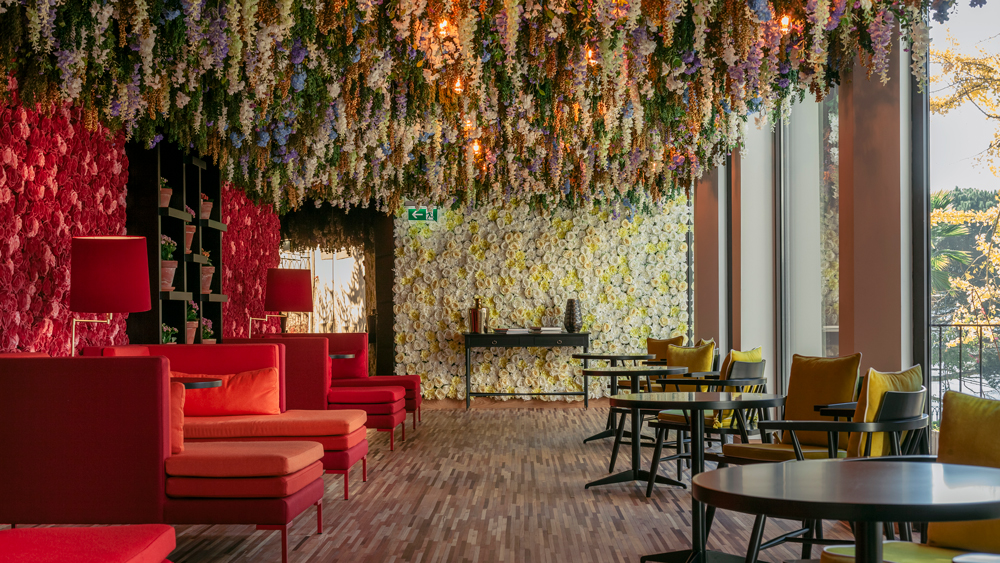 As Portugal’s popularity among discerning travelers continues to rise, so too does the number of fabulous new hotels popping up within its borders. Algarve has long been a favorite for its stunning beaches, while Lisbon’s reputation as a cultural destination has never been stronger. But don’t sleep on the charming city of Porto, with its dramatic riverfront location, robust culinary heritage, delicious port wines—and the brand new Hotel Torel Avantgarde

Using the word avant-garde in a hotel’s name is gutsy,  but the Torel pulls it off in spades thanks to its commitment to forward-thinking design. The hotel’s main door sets the stylish tone immediately: The beautifully carved wooden entry is in fact a work of art by the local artist Paulo Neves. Inside, the reception desk is etched with the same circular patterns, while tree trunk installations by the artist line the adjacent lounge, which itself is decorated with modern furniture in red and green—the colors of the Portuguese flag. With this space, the hotel lays bare the ethos behind its aesthetic: It’s an homage to history’s avant-garde figures, and to Portugal itself.

To tackle this ambitious project, two designers were tapped to bring the hotel to life. Lisbon’s Isabel Sá Nogueira was tasked to oversee the public spaces, while local agency Nano Design took care of the 47 guest rooms. Named after iconic avant-garde characters from just about every discipline (music, art, film, and architecture), the rooms are individually rendered with bold—and highly Instagramable—interiors, anchored by a mural of the legend it’s named after and tons of quirky design references. The Coco Chanel Suite, for instance, features quilted blankets, a dress form, and a black-tile soaking tub pressed against a window overlooking the Douro River. The Charlie Chaplin room, meanwhile, is brightened up with pendant bulbs hidden inside bowler hats. And the Frida Kahlo is an explosion of colors with embroidered textiles and cactus accessories.
The hotel’s restaurant, the Digby—named after the Englishman Sir Kenelm Digby, who is credited with inventing the wine bottle in the 17th century—looks to the city of Porto for its inspiration: Here, primary colors, maroon, and gold mingle with mirrored surfaces to reflect the city’s nighttime glow. It’s an utterly elegant setting for an internationally influenced menu where dishes like brie cheese with crispy quinoa and monkfish with clams are the stars.