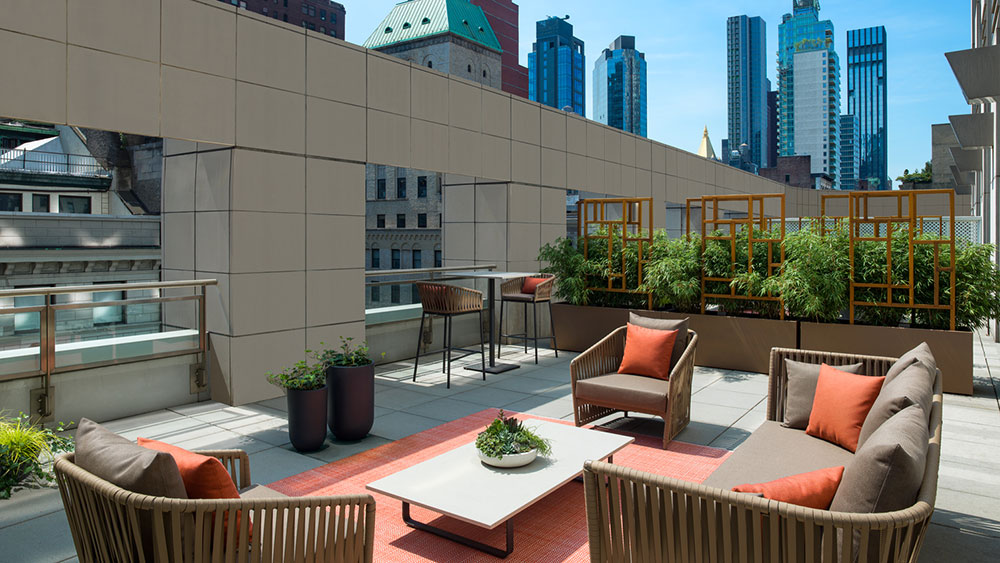 Since its opening in 2013, The Langham New York has had a secret—or six, to be exact. Among the hotel’s 234 spacious, residential-style accommodations are six rooms—three on the 11th floor, three on the fifth floor—with private terraces that either look out over Fifth Avenue or are surrounded by glittering Midtown towers. Because these are the only rooms at the hotel with outdoor spaces (not even the Empire State Presidential Suite has got that), and because they come in an array of categories (a couple are Junior Suites, for example, while others are Deluxe), the hotel never officially promoted them or put them in the inventory. Which means there was no way to book them; instead, guests were surprised with an upgrade to the rooms upon check-in, based on availability.

Now, however, there’s an easier way to hit the Langham terrace lottery: As of this month, guests can actually secure these formerly “secret” rooms in advance. Following a landscaping of the terraces, each of the al fresco spaces is now furnished with lounge seating, high-top tables for enjoying a quiet meal and hedge wall dividers. The dividers can be removed to form one large terrace to be shared by the three rooms on each floor, making them a great option for families, small groups, and events.

With the renovations, The Langham has deemed the terrace rooms worthy of being “official”—and officially bookable. But even once they are listed on the website later this month, guests will still need to call the hotel directly to reserve these sanctuaries, so that the staff can walk you through the specifics of the different layout options. So, while the secret of the terrace rooms may be out, they are still an “insider’s tip” for travelers looking for something special on their next NYC visit.