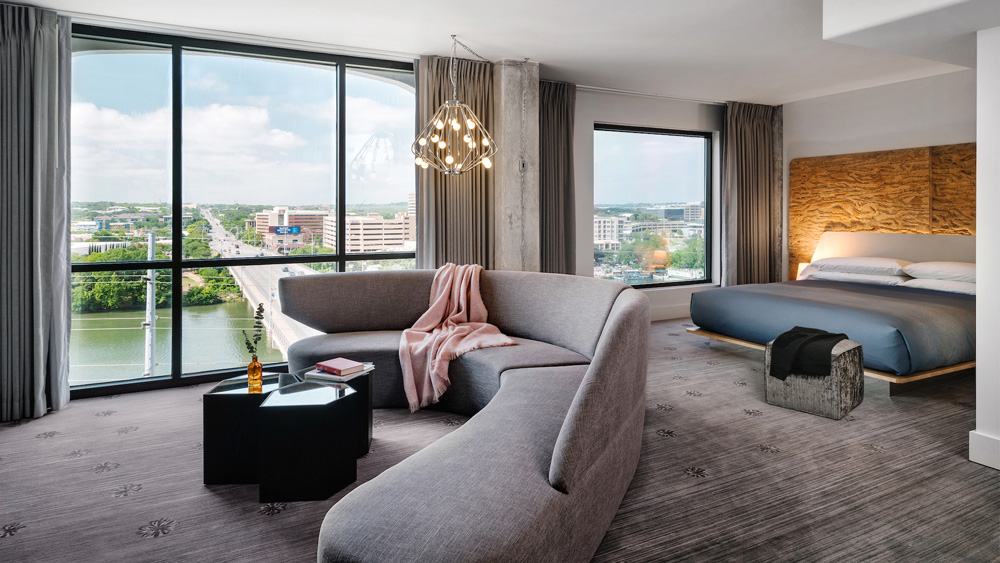 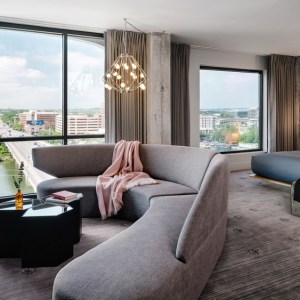 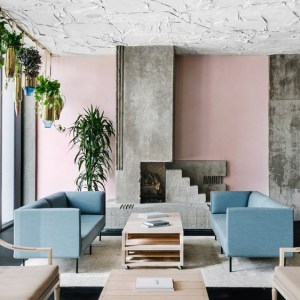 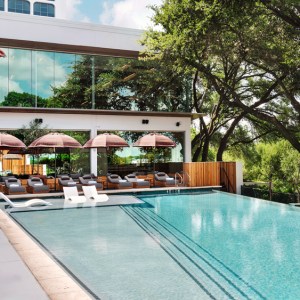 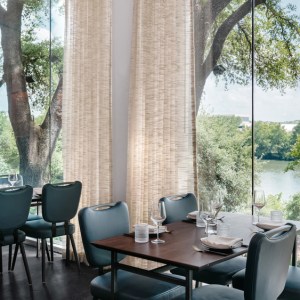 With its unique modernist exterior, chicly sparse decor, and creative-minded ethos, the Line is a distillation of what Austin does best. Opened earlier this summer, the third outpost of Sydell Group’s always buzzy chain of hotels by the same name nicely bridges the gap between the artsy hotels keeping the city weird and its old-school grande dames. It’s a sweet spot that mixes sleek and southwestern guest rooms with must-try restaurants and one of the most well positioned locations in the city.

Perched on the outer fringes of Downtown Austin on the shores of Town Lake, the Line has transformed the Crest Inn—an iconic feature of the city’s skyline since its groovy mid-century façade was erected in 1965. When it first opened, the hotel was one of the city’s hot spots, hosting artists and the party set at Club Seville, a swinging dinner and dance club that broadcasted a live jazz radio show once a week. Now, Sydell (the brain trust also behind the ever-popular NoMad Hotels) has breathed fresh new life into the property—creating spaces for the city’s new creatives to settle into, such as the sleek Arlo Grey restaurant (helmed by Top Chef winner Kristen Kish), the vibrant lakeside infinity pool and bar, and the soon-to-debut sweeping P6 rooftop lounge.

When not charting out the day’s gallery walk or drumming up the next billion-dollar start-up by the lobby’s cement-and-pastel-pink fireplace, guests have plenty of room to recharge upstairs. A full 108 of the property’s 428 guest rooms are suites—and all feature floor-to-ceiling windows boasting panoramic views of the Austin skyline and the lake below. Inside, the rooms and suites feature a measured balance of old and new, mixing a minimalist approach with nods to ranching culture, ranging from sandblasted plywood headboards to chrome lounge chairs accented with leather saddle straps. The property has teamed up with local nonprofit Big Medium to incorporate original works by Central Texan artists throughout all of the guest rooms, and the city’s arts scene will be given even more airtime back downstairs when the dedicated artist’s studio opens later this year.

When not out eating their way through the city’s many award-winning restaurants or watching gigs at iconic venues like the Elephant Room and the Paramount Theater, guests can catch up on some R&R back at the property by taking full advantage of its lakeside home. Sound baths and morning yoga sessions on one of the nearby docks will rejuvenate tired bodies and minds, while a ride around the shore on one of the property’s complimentary bikes is a great way to work off last night’s barbecue.