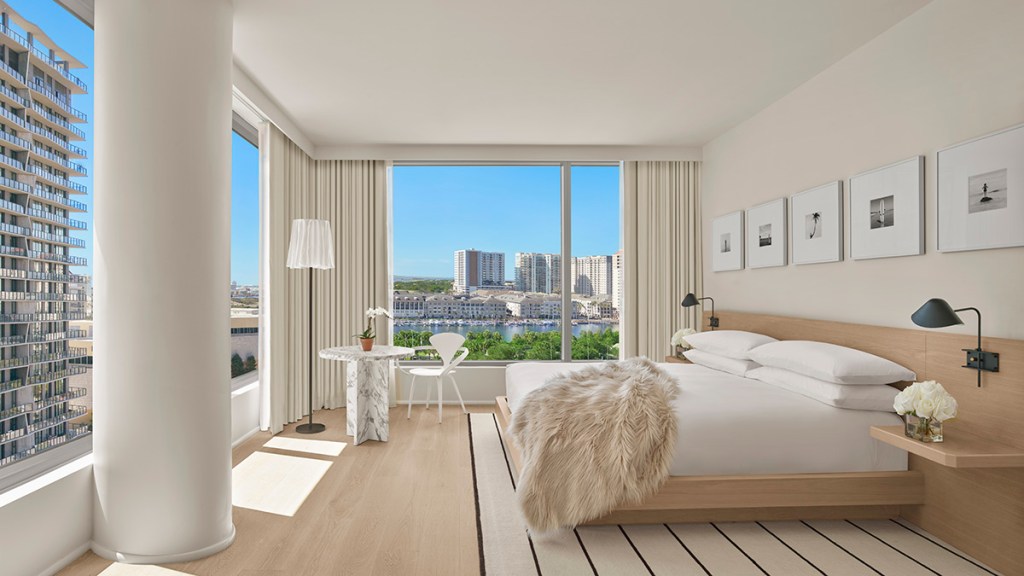 Edition is ready to fancy up Tampa’s hospitality scene.

The hotel group, which helms no less than 14 properties worldwide, says it’s opening up the city’s first five-star hotel this October. The Tampa Edition is the crown jewel of the new $3.5 billion Water Street Tampa neighborhood and is promising to set a new standard of luxury in the coastal destination.

The 26-story hotel, which will open in preview next week, will have 172 rooms and suites, plus 38 private residences. Conceived by noted hotelier Ian Schrager and the team at Marriott International, the newcomer carries Edition’s signature simplicity and elegance with Art Deco curves and lush greenery. The lower nine floors will be dedicated to the hotel’s rooms and amenities, while the vertical tower will house the residences with wrap-around balconies.

The lavish lobby is centered around a dramatic white-marble staircase that beckons exploration. The cozy Lobby Bar, which is dotted with designer furniture and a custom travertine pool table, will serve classic cocktails and sharable small plates. Nearby, fine-dining restaurant Lilac will sling top-notch Mediterranean dishes by Michelin-star chef John Fraser. Highlights include grouper cooked in a cataplana, short rib from a rotisserie as well as herbed pasta with egg and chanterelle mushrooms.

Fraser also spearheaded the hotel’s other dining spots, including the alfresco lobby restaurant Market, which will serve up Italian classics. On the second floor, the Punch Room will offer cocktails inspired by the West Indies, the Lounge will serve tasty refreshments and light bites and the Verde Antico marble bar will allow you to enjoy top-notch entertainers. Elsewhere on this floor is a private event space that can accommodate 250 guests, along with a series of high-tech meeting rooms and a spa with six treatment rooms. Of course, you can expect Edition’s signature massages and treatments.

The pinnacle is the Rooftop. Located on the ninth floor, it features a sprawling pool club with 81 sun loungers, cabanas, resident DJs and a bar. You can also dine at another restaurant by Fraser called Azure at Edition.

“Not often have I had the opportunity to work on a project that will completely transform the very center and heartbeat of a great city like Tampa, and make it even greater,” Schrager said in a statement. “I call it urban expansion, rather than urban renewal, and it serves as a model for how cities will transform and evolve the future.”

Looks like a trip to Tampa is in order.

Click here to see all the photos of The Tampa Edition.