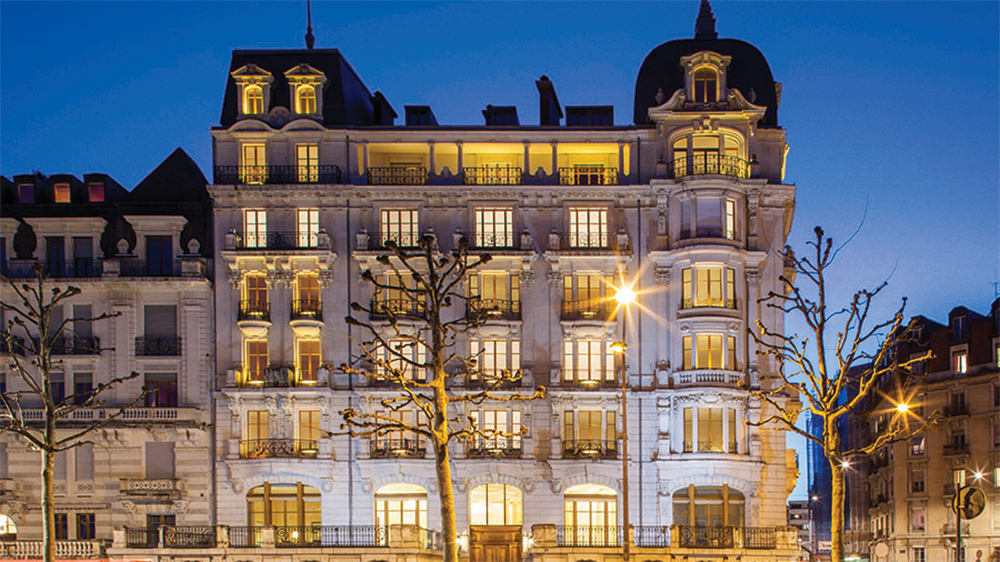 Geneva is home to Europe’s largest hotel suite, the 18,083-square-foot Royal Penthouse at the Hotel President Wilson. But the Woodward, the latest five-star pile to open on Lake Geneva’s northern banks, just along Quai Wilson, doesn’t bother competing in that department. Each of the 26 rooms is a suite, ranging in size from just under 600 square feet to 3,300 square feet, so every guest gets to be a VIP.

It’s a typically glamorous gut-renovation from designer Pierre-Yves Rochon, known for London’s Savoy and the George V in Paris. No matter which suite you book (starting from around $1,370 per night) expect dazzling white-marble bathrooms piled high with products from tony British toiletry brand Bamford, huge working fireplaces, carpets plush enough to feel like slippers and marquetry-style wood paneling that stretches beyond the floor and up the walls.

A look inside one of the luxe suites.  Courtesy of The Woodward Geneva

There’s also a Guerlain-operated spa plus two restaurants: an outpost of Joël Robuchon L’Atelier—order one of the late chef’s signatures, Le Caviar, a dollop of roe presented on top of a painstakingly decorated jelly that’s irresistibly Instagrammable (we dare you to resist). The Woodward’s also home to the first European satellite for New York–based, plant-powered Le Jardinier, which snared its first Michelin star in 2020.

Bedroom with a view.  Courtesy of The Woodward Geneva

Rochon’s imagination rescued the Belle Époque–era building from its recent incarnation as a private bank, though the property was originally built as a hotel in 1901. In a charming nod to that era, the keys come complete with old-school leather fobs, even if the openers are entirely decorative; computer chips embedded in the tassels now unlock the doors.

Don’t come to Geneva without asking the concierge here to arrange a private tour or two of some of the top-flight watchmaking museums nearby: Patek Philippe is one standout, with five centuries of timekeeping on show, as is the new museum from Audemars Piguet, a trippy building with the signature wit of Danish starchitect Bjarke Ingels.