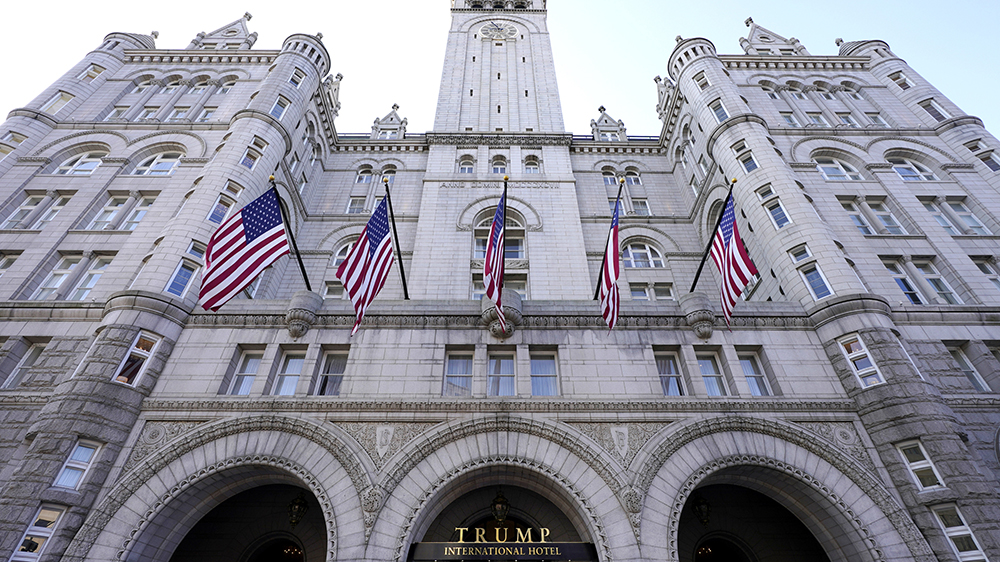 The 45th US President is checking out of the Trump International Hotel in Washington, D.C.

The Trump Organization has reportedly reached an agreement to sell the rights to its marquee hotel to CGI Merchant Group for $375 million, according to The Wall Street Journal. As part of the planned deal with the Miami-based investment firm, the Washington mainstay will be renamed the Waldorf Astoria and managed by the Hilton group, sources told the publication.

The Trump Organization won approval from the federal government to redevelop the historic Old Post Office building back in 2012 and opened the doors in September 2016. The 263-key luxury hotel features some of the most spacious guest rooms in the capital and is located just a mile away from the White House on Pennsylvania Avenue. While it has been a high-profile asset for Trump’s family hotel company, it has been on and off the market since 2019.

A view inside the grand lobby of the Trump International Hotel in Washington, D.C.  Douliery Olivier/AP

The sale comes just one month after The House Committee on Oversight and Reform published a report regarding the hotel’s finances. The former US president claimed the hotel made $150 million while he was in office, but the congressional committee has said it lost more than $70 million in the four years since opening.

The report also stated that Trump “concealed potential conflicts of interest” while leasing the hotel. Throughout Trump’s presidency, there were reports suggesting foreign governments and other interest groups stayed at the Trump Hotel as a way to gain favor with the president. Documents showed that the hotel received $3.7 million in payments from foreign governments. According to the committee, that’s enough to cover 7,400 nights at the hotel on an average daily rate. The Trump Organization has since disputed those findings and called the report “misleading.”

Given its politicized past, the swanky hotel would seem to benefit from a refresh with a luxury brand like Waldorf Astoria. It may not have to wait long, either. CGI Merchant Group is expected to close the deal in the first quarter of next year.

The Trump Organization and CGI Merchant Group did not immediately respond to Robb Report‘s requests for comment on the sale of the hotel.