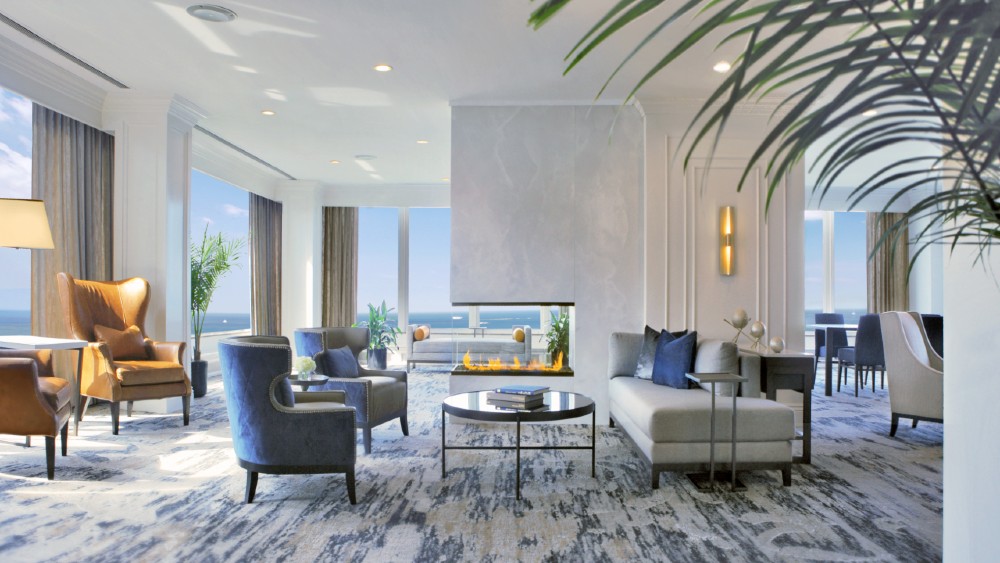 Surrounded by views of Grant Park, Lake Michigan, and the downtown cityscape, the Hilton Chicago has hosted countless celebrities, dignitaries and captains of industry over its 93-year history, from Charles Lindbergh, Bette Davis and Lauren Bacall to John Travolta and President Obama. But a redesign unveiled this past January of the two Imperial Suites—a pair of 2,100-square-foot apartments on the 26th floor—pays homage to two particularly regal past guests: Queen Elizabeth II and Elizabeth Taylor, queen of Old Hollywood.

First launched in 1955, the Imperial Suites were originally named after the British queen, who hosted a banquet there in 1959 after opening the St. Lawrence Seaway. For this transformation, however, Dallas-based firm Looney & Associates also took inspiration from style icon Elizabeth Taylor, who lived in the hotel in 1950 for the duration of her eight-month marriage to hotel heir Conrad “Nicky” Hilton, Jr., son of the Hilton brand’s founder. The result is sophisticated, contemporary spaces that feel both appropriately regal and updated to be relevant (perhaps a bit like the current British royal family itself.)

The previously dark, heavy furniture and earth-tone palette have been replaced with soothing sapphire and emerald hues and sleek modernist pieces that help create more space and accentuate the floor-to-ceiling windows framing the common areas. As the design team notes, the use of geometric motifs in the lighting, carpet and artwork recalls the facets of the precious gems likely to have adorned the suites’ iconic namesakes. Pops of gold. along with delicate moldings on the walls and ceiling, soften the aesthetic, while organic textiles further help create a plush sanctuary.

Each suite—one is north-facing, the other south—features a master bedroom with King bed, a separate double guest room, a kitchen, a nightcap station, a dining table for eight and an exquisite white onyx fireplace that is the centerpiece of the living area. Should you want to host your own royal banquet here, the space can comfortably accommodate up to 100 guests. Imperial Suite rates start at $5,000 per night.