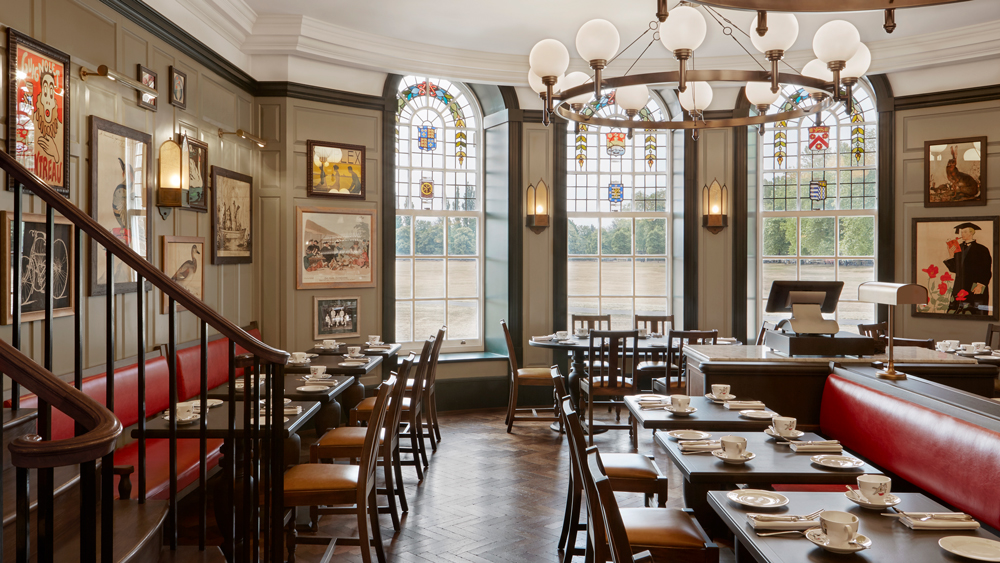 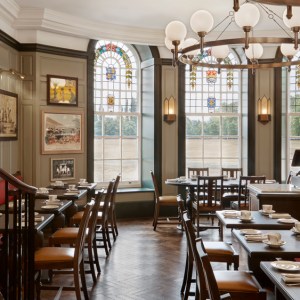 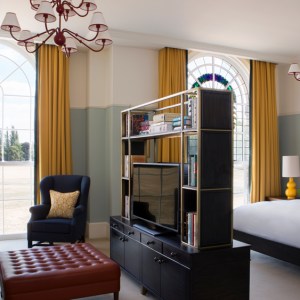 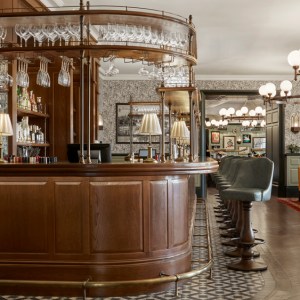 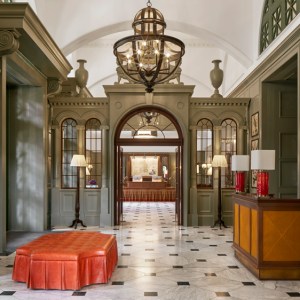 Until its recent top-to-bottom renovation, the University Arms was a slightly creaky, old-school hotel befitting its status as the favorite overnight for visitors to the University of Cambridge (founded in 1209 and pretty old-school itself). But when the Autograph Collection hotel, which started life as a couching inn in 1834, recently reopened its doors after the four-year redo, everything had changed. Suddenly the stuffy sentinel, had morphed into Cambridge’s on-trend, Instagrammable It Girl—complete with a buzzing bar, a foodie-friendly restaurant, and 192 fashion-forward rooms.

How do you choreograph a Cambridge-worthy master class in redesign and restoration? Call in John Simpson, for starters. One of Britain’s most celebrated classicist star-architects, famous for his work on both Buckingham and Kensington palaces, he’s a man who knows his Doric from his Corinthian columns. Simpson tore down the hotel’s misguided ’60s additions, an expanse of brutalist blight that included a parking structure and a modern wing mummified in concrete. In their place, he erected an elegant new annex and a neoclassical portico supported by Samson-sized pillars. The result is a throwback silhouette that echoes the University of Cambridge itself—an ethereal sprawl of college turrets, spires, archways, and fountains.

Inside, Martin Brudnizki, known for his work on projects like the legendary member’s club Annabel’s and the brand-new NoMad Las Vegas, was enlisted as the interior architect in charge. “We wanted to create a space that flows throughout,” he says, “linking the interior design to the building and the wider vicinity of Cambridge.” That meant deftly blending old and new—because while Cambridge is an emphatically tradition-bound town, where rowers still skim down the back river in punts and the men’s boutiques stock evening tailcoats, the colleges now draw global, high-tech classes of bright young things, as well. To pull off this classical-meets-contemporary balance, Brudnizki chose a soft, Cambridge-blue palette that pays homage to the college’s colors but still feels fresh. The decorous white-tiled bathrooms feature 21st-century heated floors, and crayon-bright velvet lounge chairs add a stylish pop to the guest rooms along with brightly upholstered headboards and mid-century leather-topped desks.

Bespoke touches are everywhere: The ceramic coffee cups stacked in the built-in cupboards are house designs, featuring the University Arms’ facade, and the artwork running throughout the hotel is a carefully curated collection underscoring the overriding sense of place. “We focused on vintage maps, prints of iconic Cambridge landmarks, and portraits of famous Cambridge academics,” Brudnizki notes, though there is also some work by emerging talents in the mix.

The library is heart of the academically-minded hotel.  Photo: James McDonald

If you want to splurge, spring for one of the nine suites, named after Cambridge alumni and anchored by double-sided bookcases. A popular choice is the Stephen Hawking suite starring a portrait of the physicist himself, his face caught in a metaphysical blaze of blue moonlight. The ground-floor trio of amenities invites a splurge, as well. The mixologists in the Parker’s Tavern bar, always filled with a mix of local punters and academics, pour a range of signature cocktails, including the Beetle Collector (that’s tequila, chili liqueur, pink grapefruit, pale ale, and Anty Gin) inspired by Cambridge alum Charles Darwin, who’d probably be surprised by his boozy legacy.

Consider that a start to dinner in the adjoining Parker’s Tavern restaurant, where the freestanding wooden banquettes are surrounded by stained-glass windows featuring Cambridge college crests, and where the menu reasserts the local theme. “To move forward you have to embrace history,” says chef Tristan Welch, a native son who is happy to return home after a tenure in a range of Michelin-starred London and Paris kitchens. “I’m so glad to be reconnected to the British produce I’m passionate about,” he says, and the passion is obvious. The restaurant’s hand-dived Scottish scallops come cooked in their shell, accented by coastal herbs; a Norfolk duck roasted in honey and thyme wears a crackling golden skin, bucking the current trend of neutered, skinless birds.

If you’re ambitious, you can work off a bit of that dinner the next day in the basement gym. However, the better option is to retire to the showcase library, anchored by a massive oak fireplace and looking out on the 25-acre green parkland that sits behind the hotel. The real attraction here, though, are the floor-to-ceiling bookshelves crammed with titles curated by Heywood Hill, a venerable London bookstore. Forget the depressing fad that reduces books to a color-coordinated design accent. These books are meant to be read, and like the best libraries, the University Arms’ well-thumbed collection runs an eclectic gamut, from Darwin, Hawking, and Bertrand Russell to volumes on British gardens and the Dior catwalk.

The hotel’s real veneration for the written word, though, isn’t limited to the library. Walk into the public bathrooms and you’ll hear a tape of Alan Bennett reading from The Wind in the Willows. That may be the surest sign that the University Arms isn’t just one of England’s most stylish hotels but probably it’s smartest one, as well.