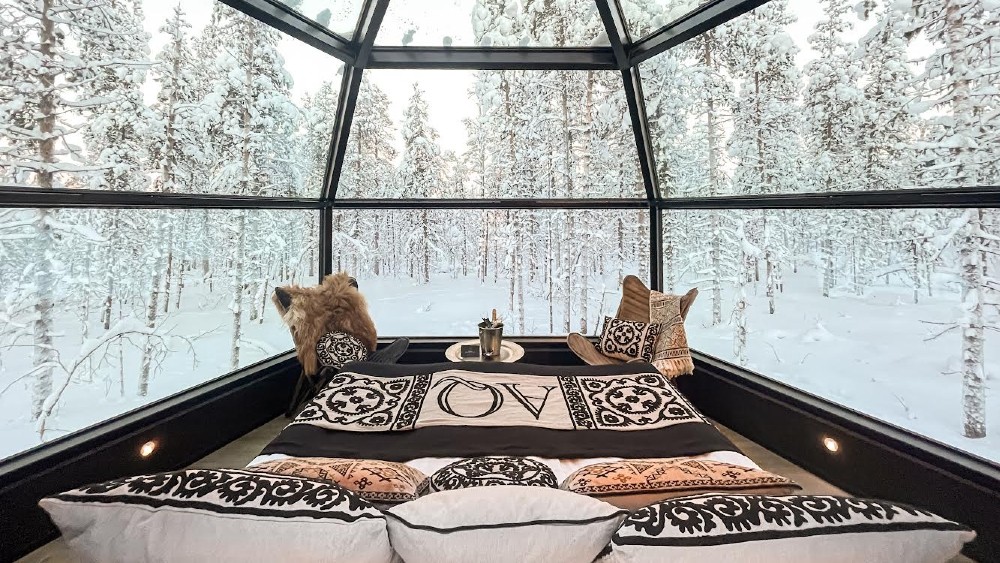 Before creating Aurora Queen Resort, the new runaway hit of Finland’s Northern Lights season, Nina Rantanen and Pasi Sivonen had, in Sivonen’s words, “not built even a birdhouse before.” But what this husband-and-wife team had built over the course of nearly three decades together was one of Helsinki’s top home décor shops, its inventory famously informed by the couple’s love of travel and local craftsmanship.

Of the ties that now bind Rantanen and Sivonen personally and professionally to artisans across the globe, arguably the strongest lead to Morocco, where Rantanen’s father was born and raised. So if you detect a certain Norden-meets-medina vibe upon arrival at the Aurora Queen Resort—a 13-igloo and one-suite luxury hideaway opened three months ago near the village of Saariselkä in the wilderness of northern Lapland—you’re not wrong. Of course, the first clue is hard to miss: an entryway mise-en-scène of snowshoes, cross-country skis, reindeer antlers and hand-cut brass lanterns.

The igloos were custom designed to retain heat and maximize views.  Aurora Queen

This blending of references, patterns and textures is practically an Olympic sport for Rantanen, whose similar approach to fashion has turned her into something of a street style icon in Helsinki—and probably the only hotelier in Lapland who flits about a lobby in jewel-toned midi tunics, leopard print scarves and metallic moon boots.

Sivonen, by contrast, was the project’s architecture and engineering enthusiast, working with a whole panel of experts to carry out his dream structure: a hybrid that paired the openness and immersiveness of a conventional aurora-viewing igloo with the coziness and privacy of cabins, all with the maximum sustainability.

After seemingly every centimeter he hoped to add or subtract led to impassioned debate, a winning design emerged. First, there’s the generously proportioned, glass-domed “bedroom,” which is believed to be the first in Finland to deploy a triple-pane system for maximum heat retention and energy efficiency. (All the resort’s heat, from the snow-melt function of the glass domes to the radiant heating in the floors, is geothermal.)

Then there’s the wood cabin-like section, where the closet, vestibule and bathroom are all thoughtfully appointed—down to a turbo-charged blow-dryer that comes in extra handy 250 miles above the Arctic Circle. As a bonus, beyond being cozy and cloistering, the wooden walls come with a scent so sublime, more than one guest has suggested it be turned into a candle.

As a result, even when you’re inside your igloo, you feel immersed in your forested surroundings, which—for lack of non-fairytale analogies—evoke Narnia or Arendelle as much as your furnishings evoke Fez or Marrakech (or perhaps more accurately, Tétouan, Rantanen’s father’s hometown).

The Panorama Sauna Suite—which stands alone at the moment but will be one of several such suites by the end of 2023—is immersive in different ways: Picture one soaring wall of floor-to-ceiling windows, and another wall that’s half-window, half built-in seating nook, allowing for various vantage points to fuel your daydreams (or nighttime awe). The suite also houses the perfect sauna-a-deux, with a little viewing window should a show erupt in the sky while you’re in there.

The Saariselkä Ski slopes are one of the areas you can visit.  Inari-Saariselkä

Granted, as any veteran aurora seeker knows, such shows aren’t guaranteed, even if you visit during peak times (November-March) or toward the end of the season (late March through early April), when equinox-related solar wind energy may bode well for extra drama overhead. On nights that don’t look promising on the premises of Aurora Queen itself, the resort can organize lights-chasing treks of all kinds, with entirely different conditions possible just an hour north by car, in the area around Inari.

Not that you should visit Inari for the prospective light shows alone. The town is home to, among other things, the stunning Sámi Cultural Centre Sajos, where a guided tour will introduce you to the history of Europe’s only indigenous people—as well as the onsite Sámi Parliament, where the region’s Sámi leaders gather regularly, complete with UN-style translators to help facilitate dialogue among speakers of various distinct Sámi languages. The nearby Sámi Museum Siida is also worth a visit; though the indoor exhibit space is currently being renovated and prepared for an upcoming exhibit, the outdoor area is a fascinating series of traditional structures, tools and modes of transport.

You’ll see plenty of reindeer during your stay.  Inari-Saariselkä

That last group includes gorgeous old reindeer sleds—predecessors to the ones you’ll want to experience back at Aurora Queen. Rantanen and Sivonen have partnered with Armi and Timo Palonoja—heads of a local Sámi family and owners of Joiku-Kotsamo Safaris—on the resort’s reindeer excursion. (You’ll quickly surmise that reindeer far and away outnumber humans in this part of the world, and that reindeer herding has been a Sámi mainstay for generations.)

Other activities on offer at the resort—which has already drawn guests from 43 countries since its recent opening—range from snowshoeing to cross-country skiing to snowmobiling. If you want to customize your experience or make all your outings private (in which case, let management know as soon as you book), you can do anything from winter fell biking in the breathtaking next-door national park to downhill skiing or Aurora Tobogganing in the sweet neighboring village of Saariselkä.

Needless to say, you’re likely to work up quite an appetite, and meals on offer at Aurora Queen hit the spot with fresh takes on Finnish staples—with the creamy soups and rich, earthy breads being particular standouts. Whatever you do, don’t fail to try the house-made ice cream for dessert before you return to your dome or suite for a night of aurora spectating. Rates start at approximately $500 per night.