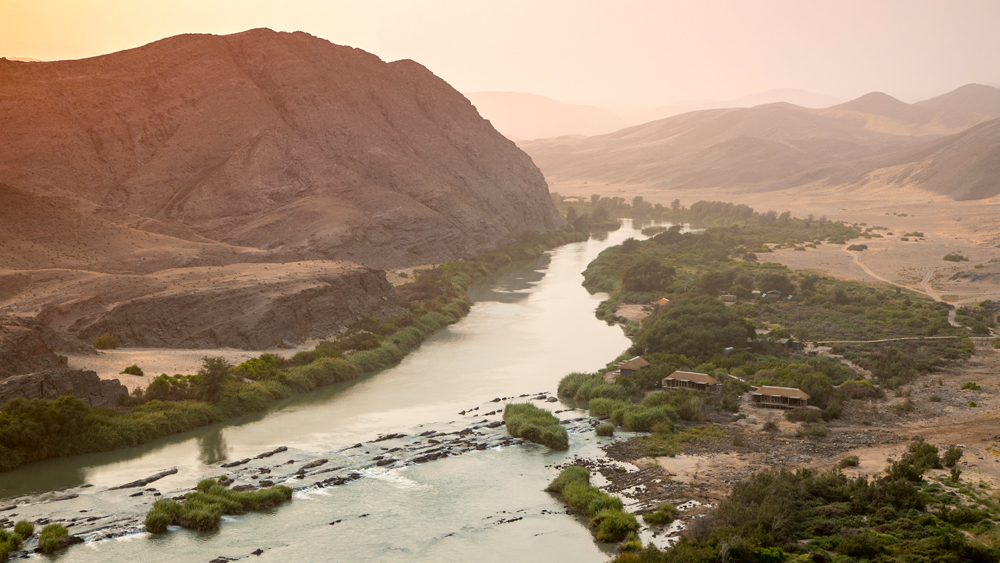 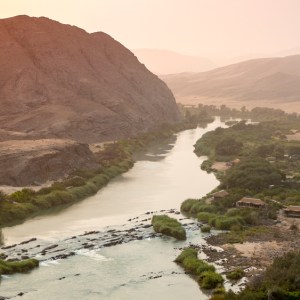 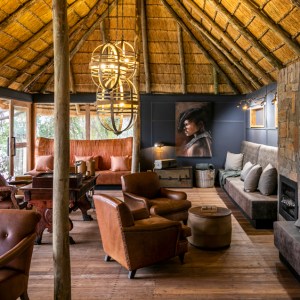 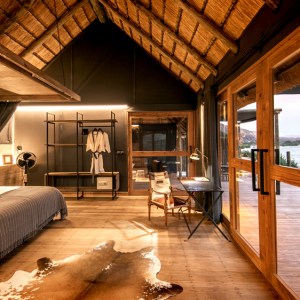 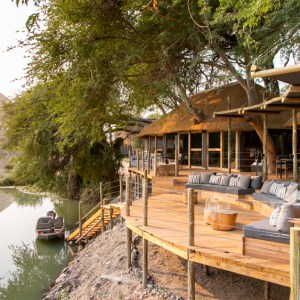 Like nearly everything else in Namibia, the Kunene River cuts an otherworldly form—a striking blue and green gash in the otherwise terra-cotta dessert of the remote Hartmann’s Valley. It is against this dramatic backdrop that sits the Wilderness Safaris’ Serra Cafema camp. The lodge, which was one of the first upscale properties to open on the northern fringes of the country (and, until Shipwreck Lodge and Omaanda opened earlier this year, one of the only luxury lodges in Namibia at large), has just come off of a full redesign, unveiling a surprisingly sleek new look in late September.

From the outside, the 100 percent solar-powered camp is unassuming, blending into the surrounding landscape with pitched thatched rooves and light wood decking that matches the carefully preserved patches of ana trees that line the riverbanks. This low-profile open layout—where buildings fan out from a central oval-shaped deck and are connected to each other through different outdoor spaces—was inspired by the structure of the Himba villages that have inhabited this region for centuries. Inside each of the eight suites, the aesthetic and culture of the Himba have also been incorporated. A palette of natural wood and rich brown leather is accented by feature walls made of stone sourced from a nearby valley, and photographs of residents from the nearby villages are blown up to serve as large-scale artwork. There are also plenty of hallmarks of classic safari—beds canopied in mosquito nets, indoor-outdoor showers, and wide decks perfect for sundowners over the river.

And while Serra Cafema doesn’t boast a pool with views that rival the best game drives or a full-service spa, it does provide a more than comfortable place to call home while you’re out exploring the 741,000 rugged acres of Marienfluss Conservancy. The conservancy is owned primarily by the Himba people, giving you a rare opportunity to immerse yourself in the rhythms of one of the last remaining semi-nomadic cultures with visits to nearby villages (if your timing aligns with theirs, of course). When you’re not spending the day getting to know the Himba, you can immerse yourself in the flora and fauna of northwestern Namibia—though don’t expect to see any of the Big Five. Instead, you’ll spot Nile crocodiles and Goliath water heron while cruising down the river, Gemsbok and Springbok antelope while out on dune-buggy rides, and Namaqua chameleons and cape foxes while out on walking tours of the valley.

When it comes time to turn in for the evening, dinner can be enjoyed on your private deck or in the communal dining area, which features furniture built by young craftsmen and women from the region in partnership with the nonprofit Tabled. And no matter what you do, be sure to grab a drink after dinner and settle into one of the lower-level seating area’s graphite-gray cushions—it’s one of the best places on the property to watch the glittering night sky unfold above.