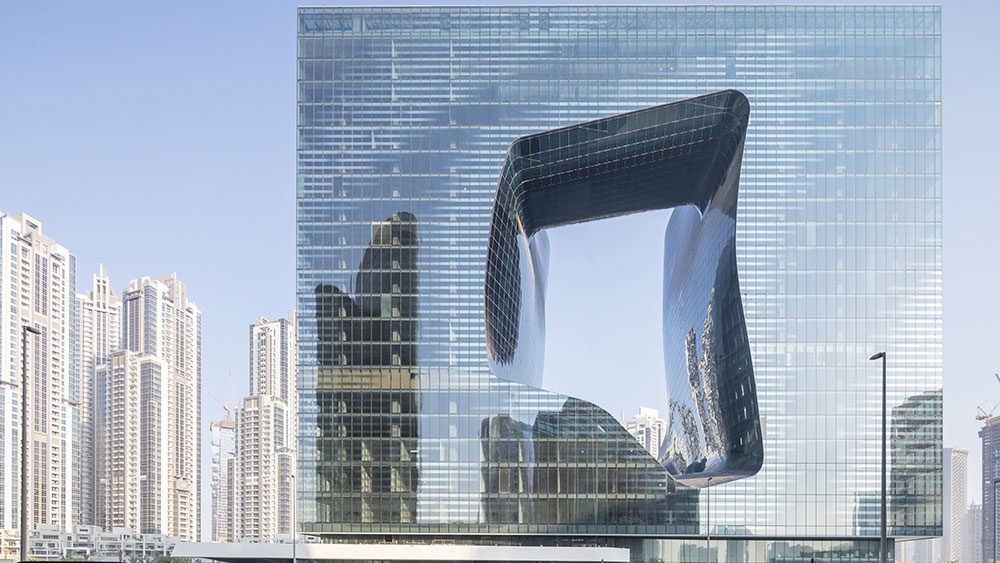 They don’t call her the “Queen of the Curve” for nothing. One of the late Zaha Hadid’s original designs has been slated to open next year, and it comes complete with a large—and, yes, curvaceous—hole punched straight through its center.

Dubbed the Opus, the 20-story, mixed-use building will be first and only of Hadid’s in Dubai. It promises 56,000 square feet of office space, 12 restaurants and a hotel, which will be operated by luxury travel company ME by Melià. The Opus will be its first outpost in Dubai.

Another view of the Opus  Photography by Lauren Ghinitoiu

The Opus’s jaw-dropping exterior is likely to keep cameras clicking. The empty space—or “central void,” as Zaha Hadid Architects calls it—was inspired by an ice cube melting beneath the summer sun. The void’s curved, wobbly lines stand in striking contrast to the rest of the structure’s square angles. It’s not hard to imagine tourists snapping selfies in front of the structure’s mirrored glass.

The Opus  Photography by Lauren Ghinitoiu

To achieve this negative space, Zaha Hadid Architects began with two towers. As development continued, these two entities fused together to create one cube. Rather than fill in all of the blank space, the firm installed a four-story atrium on the ground level, and an asymmetric, three-story bridge about 230 feet off the ground. Crunch the numbers and you’re left with an eight-story oblivion in between.

The Opus at night  Photo: Courtesy of Zaha Hadid Architects

Zaha Hadid Architects also took the liberty of designing the building’s interiors, most notably that of the new ME by Melià offering. The 100-room hotel will include four penthouse residences, private balconies in each room and bespoke furniture and design reminiscent of the Opus’s sculptural façade. Reception will be located on the ground floor, in the atrium that joins together the two towers, with the void hanging just above.

Glass spheres hang from the ceiling at reception, which are more artwork more than chandelier, and ZHA will install a special piece, “the Crest,” in the courtyard. Designed by Hadid herself, the structure circles a pool, with steps leading into the water and an asymmetrical bridge crossing over.

“We envisaged a piece that would emerge from the fountain at the center of the pool,” Hadid told Wallpaper. “The metallic surface will reflect the sky on one side and the rippling water on the underside.”

A bedroom at the hotel  Photo: Courtesy of Zaha Hadid Architects

Should you choose to check in, make sure and check out the the glossy tower’s interior come nighttime. Lights flood the void and give the building a sense of bustling life—one that can be spotted from miles away. Naturally, it’s a marvel up close and personal as well, where visitors and guests can enjoy exterior views from the Opus’s chiseled out center.

A bathroom at the hotel  Photo: Courtesy of Zaha Hadid Architects

Adjacent to the Burj Khalifa (a.k.a. the world’s tallest building), the Opus has a lot to live up to when it opens in 2020. As one of four ZHA projects shortlisted for the 2019 World Architecture Festival Awards, it looks to be well on its way.