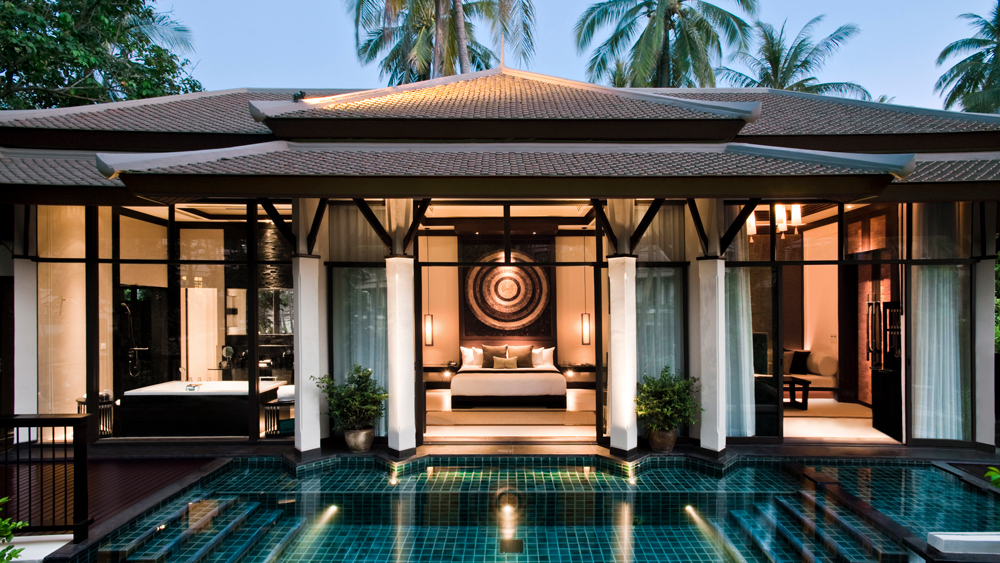 Today, sustainable travel is more important than ever as breathtaking destinations around the globe—from exotic Thailand to the African savanna—fall prey to overtourism. In recent years, a crop of new innovators has emerged with a serious commitment to the environment—and luxury standards. From energy-efficient cooling and heating to waste management and ecological regeneration, here are seven places that set the tone for the future of high-end sustainable travel.

With its arid climate, Argentina’s Uco Valley is ideal for cultivating award-winning Malbec. But to run Casa de Uco’s luxury hotel and vineyard, water comes at a premium. To tend its 790 acres of vineyards, the resort employs drip irrigation (with 90 percent efficiency) and maps the soil to determine precisely how much water each tree needs, including some 200 poplars planted solely to offset carbon-dioxide emissions. And the hotel’s 16 modernist rooms, overlooking the snowcapped Andes Mountains, are self-sufficient thanks to solar panels and geothermal energy in flooring and walls.

Pikaia Lodge is committed to keeping the Galápagos ecologically diverse. The 14-room property, located on Santa Cruz Island, is completely carbon neutral and constructed from recycled materials. (Bathroom tiles, for instance, are made from lava stone collected from local sites approved by the National Park Service.) Rainwater-collection roofs use reverse osmosis to filter water for cooking and drinking, and solar panels and ceiling ventilators are used for heating, cooling, and electricity. To boot: The property’s owners planted 12,000 trees to foster a tortoise sanctuary.

In beautiful, balmy French Polynesia, The Brando uses a pioneering seawater air-conditioning (SWAC) system to cool its 35 luxe villas. The process converts deep-ocean water into low-energy, high-efficiency AC that reduces the property’s energy demands by 90 percent. The pristine private-island resort (which is the former hideaway of legendary actor Marlon Brando) also has an on-site sorting center to compost food waste, as well as its own beehives and a vegetable and fruit garden. The owners established an Ecostation that they donated to the non-profit Tetiaroa Society to protect the atoll’s ecosystem and culture.

Aerial view  Courtesy of The Brando

Banyan Tree Samui recently became Thailand’s first and only hotel to receive a Gold Certification by EarthCheck, the world’s leading benchmark for ecotourism. The secluded, hillside resort overlooks a protected cove on the Gulf of Thailand, home to more than 10,000 acres of coral reef which have sustained unprecedented damage from years of overtourism. Among the resort’s ecological efforts, its standout coral regeneration project employs an on-staff marine biologist to retrieve and revive broken coral, then replant it into the reef along the resort.

When it opens this January, Islas Secas will have minimal impact on the 14 pristine islands it calls home. Twenty miles off the coast of Panama, the resort’s nine elegant casitas are run entirely on solar power, collected from 1,500 panels. Used guest water is reclaimed through a system of wetlands, filtered using infrared light, and repurposed for irrigation. Plus, 100 percent of food waste is dehydrated and used for composting.

The hyper-exclusive Mpala Jena Camp opened earlier this year upstream of the Zambezi River in Victoria Falls, Zimbabwe. The entire camp—which includes four tented suites and a sprawling two-bedroom villa with private plunge pools—runs on a new Tesla power unit, which harnesses and stores solar energy. All facilities are constructed from reclaimed materials, and it is on track to abolish single-use plastics in the next year.

This year alone, Taj Hotels worldwide has reduced CO2 emissions equivalent to taking 18,659 cars off the road and recycled enough water to fill 931 Olympic-size swimming pools. Its latest property is Taj Exotica Resort & Spa, Andamans, which opened earlier this year in India’s notoriously remote Bay of Bengal. Not a single tree was removed to build the 50 stilted villas, situated amid 46 acres of coconut and palmyra trees. The resort has an on-site water-bottling plant, a waste-disposal system that converts wet waste to gas and compost, and a reservoir for rainwater harvesting.