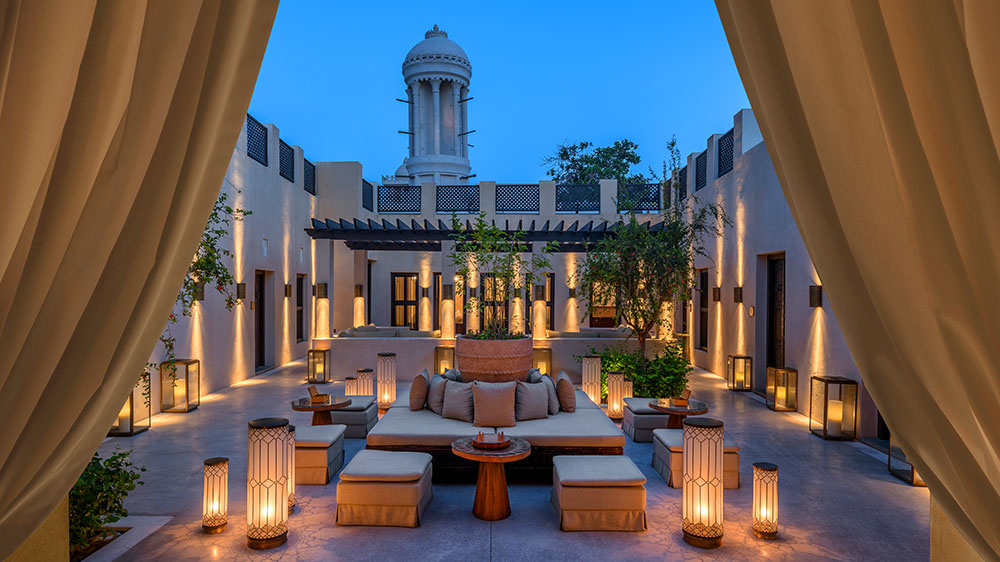 Think of United Arab Emirates and you probably think of Dubai: gleaming towers, palm-shaped islands, air-conditioned mega-malls—Vegas on the Gulf. And yet Sharjah, Dubai’s northern neighbor, just 10 miles from the airport calls to mind…. We’ll forgive you for being unfamiliar with the lesser-known emirate—it’s more conservative (no cocktail bars here) and sleepier after all, and though the art world knows it for its Biennial, it’s never had a nice place to stay the night. Until now.  With the opening of Al Bait Sharjah, a Leading Hotels of the World property and the emirate’s first luxury resort, Sharjah now offers a delightful rejoinder to Dubai’s glass and glitz.

Managed by GHM, which operates a sister hotel, the Chedi Muscat, in Oman, Al Bait sits along a waterfront canal in the heart of old Sharjah, a neighborhood of whitewashed, early 19th-century buildings hewed from coral bricks that have been faithfully restored. Steps from the hotel’s entrance, an ancient souk where Bedouins once gathered on camelbacks today houses textile shops and tailors, modern boutiques and perfumeries inside vaulted storefronts. Emirati men wearing flowing white dishdasha sip coffee and play cards in the social club next door, as the muezzin’s evocative prayer call pierces the desert air from an adjacent mosque.

Centrally situated within this walkable heritage district, Al Bait feels like its own walled village. A warren of narrow alleyways, lantern-lit at night, connect to secluded courtyards that house a hammam and spa, two restaurants and a cafe, as well as a library, museum and ice cream shop. (Try the homemade camel-milk ice cream with pistachios and rose petals.) I can guarantee that at least once you will get lost—happily—as you try to navigate the property.  The hotel’s 53 rooms and suites include several built upon the original foundations of old houses that once belonged to Sharjah’s most prestigious families. These take after their traditional design, with Arabic-style floor sofas, woven palm-frond ceilings, hand-carved wood furniture and decorative brass flourishes. The rooms are homey, romantic, tasteful—heritage luxury if you will. As part of the suite package, you might return from the hotel’s fine Arabic restaurant one balmy evening to wisps of frankincense smoke and a bubble bath topped with rose petals—the ultimate sheikha treatment.

Dubai’s attractions are easily reachable with Al Bait’s fleet of chauffeured Mercedes. But Sharjah—once named the “Cultural Capital of the Arab World” by UNESCO—offers plenty diversions of its own. The emirate is an emergent art-world destination, thanks to the Sharjah Art Foundation, based a short walk from Al Bait in the old district, which hosts the Biennial. In between expositions, the foundation organizes regular exhibitions, workshops and free film screenings. The nearby Sharjah Museum of Islamic Civilization contains more than 5,000 artifacts—the city has 19 museums in all—and the annual international book fair, the world’s third largest, earned Sharjah the title of this year’s “World Book Capital” from UNESCO. Farther afield, towards the hazy Al Hajar mountains, lie interesting archaeological ruins and desert safaris.

Once you do make it to Dubai, inevitably, you might well find that returning back to Al Bait’s romantic courtyards—walls inside walls inside walls—will make you feel as though you’re in on a certain secret.